Getting Set for Christmas

We have had a hectic couple of weeks since the last blog.

Before we left Braunston we had our visitors on Sunday – Nat and Matty were joined by Yvonne, Roy and Tilly, and after their tour of the boat they took us back to their new house for us to have a guided tour!

When Yvonne and Roy took us back to the boat, we all decided to have dinner in the Boathouse Pub.

On Monday, before leaving Braunston, I made the trip back up the hill to the shop for some provisions, and managed to get a better picture looking back down to the marina. 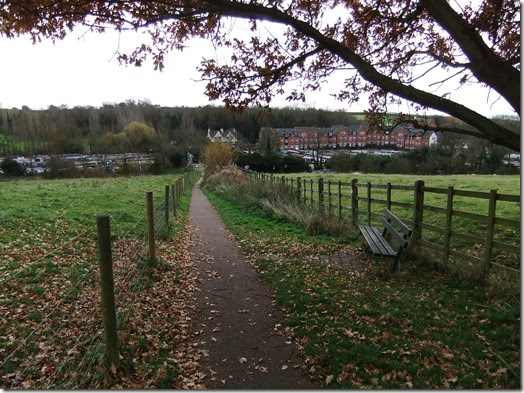 On the way back to the boat I came across a boat with some surplus crew members and volunteered to give one a home!

Here is Rudolph keeping an eye out whilst we topped up with water! 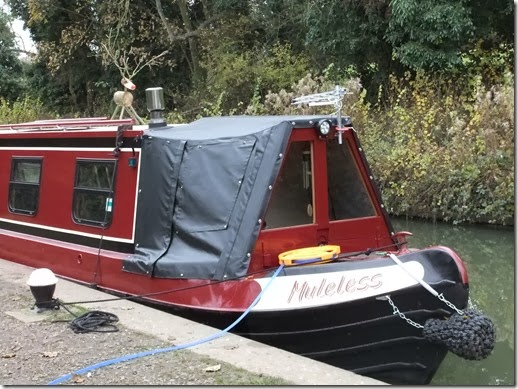 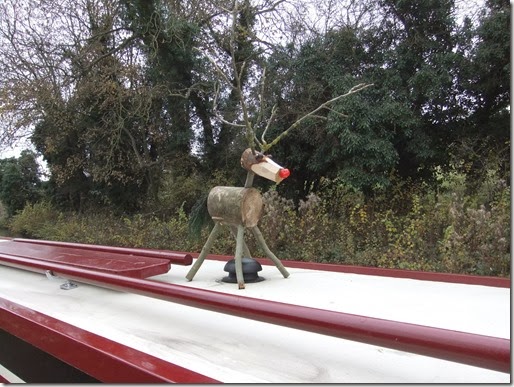 We headed back down to Napton Junction and moored up just a few hundred yards from Wigrams Marina – ready to go in on Tuesday.

Gary had bought some cleaning tablets for the diesel stove and it went from this blue flame . . . 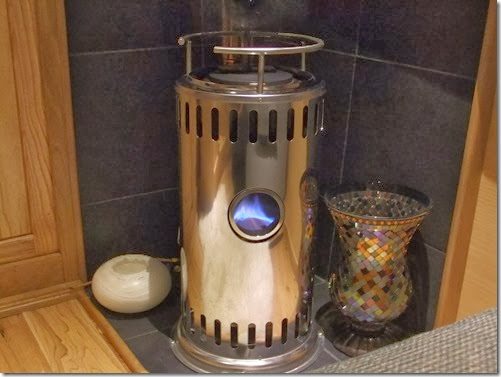 to this lovely green flame! 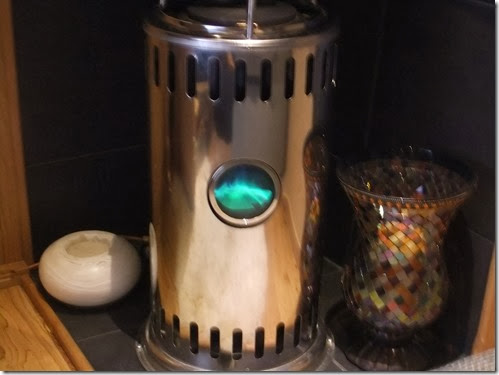 On Tuesday morning we headed into Wigrams Marina – Rudolph assisted Gary whilst I took the photo! 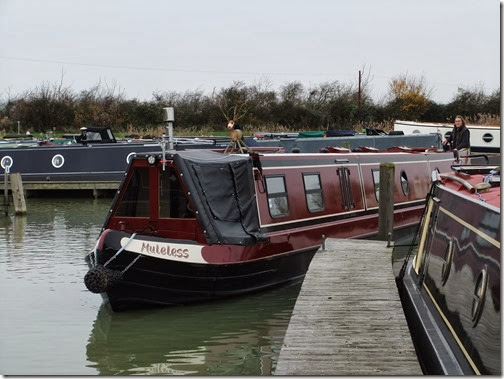 We had planned a visit down south from Wednesday, but decided to get into the marina early to catch up with some washing in their big machines before we left.

Gary had been trying to adjust the alternator belt without any luck, and Sam from Beta had arranged to call in to do it before we left – but he took one look at the alternator with the belt off and announced that it was “buggered”! and this was the “replacement” alternator we had already had! So we had to leave Sam organising a replacement for us from Beta (under warranty of course) whilst we were away!

We were only down south for 3 nights, but had to squeeze in a lot of visiting, late nights, food and drink!

This is Garys son Matt enjoying a combined Birthday/Xmas dinner! 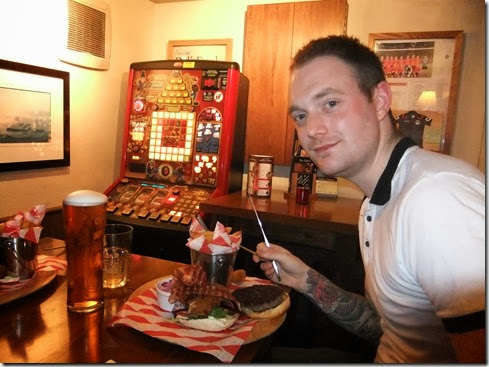 Whilst Gary visited his old workmates in Eastleigh, I spent some quality time with my Mum and Lola her dog – it was a very blustery and cold day! 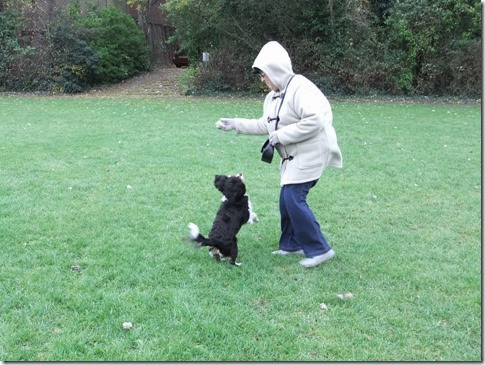 We managed to fit in an Indian takeaway with my Aunt Julie one night, and a Chinese takeaway with friends June and Chris on another.

The original plan had been to return to the boat on Saturday afternoon, and leave the marina on Sunday, but we couldnt leave before getting our replacement alternator – and this took slightly longer than anticipated!

In the meantime I thrashed the washing machines some more and Gary washed both sides and the roof of the boat.

We had a terrific sunset one night. 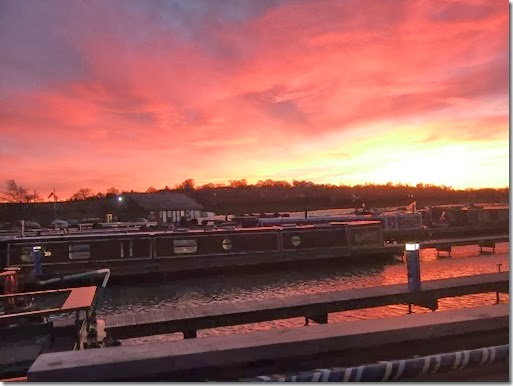 Sam arrived with our new alternator on Wednesday afternoon and soon had it fitted. We did some last minute shopping to top up supplies for the long journey ahead, and got ready to leave the marina on Thursday morning.

We had to visit Calcutt Marina for diesel – so had to drop down one lock, run some water down to fill the extremely low pound so that Gary could reverse Muleless to the service point, and then go back up the lock and head back towards Napton.

Rudolph kept lookout to make sure we didnt hit the gates! 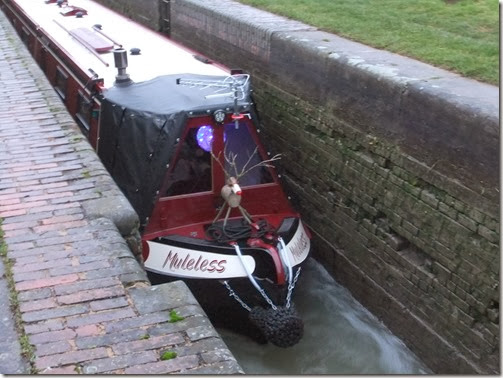 We reached the top of the Napton flight as it started to get dark – I had forgotten how different these narrow locks were, and how slow compared to the double locks of the last few weeks!! (The blue ball is part of our xmas decs). 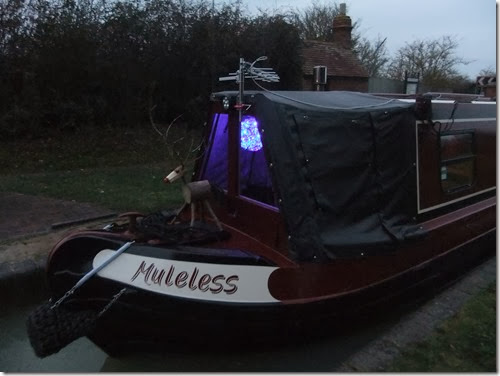 Friday we headed off on the long summit pound – Rudolph was keeping an eye out for approaching boats! 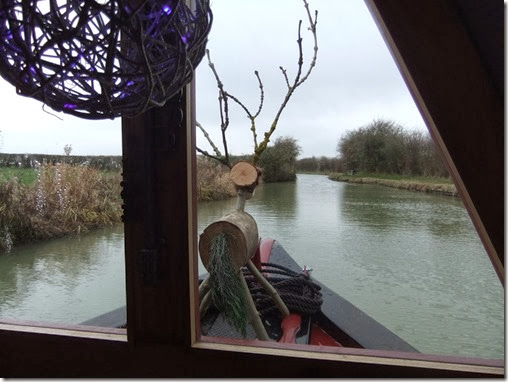 We had made a start with the xmas decorations, but I was on the lookout for a tree to complete them. 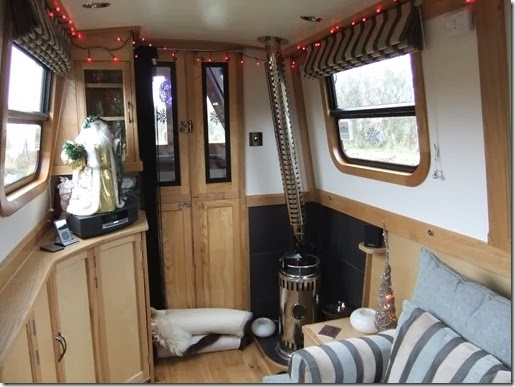 Saturday we started down the Claydon flight in strong gusty winds and sunshine. 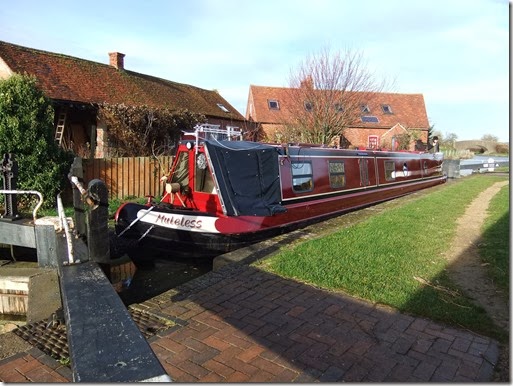 On the way down we passed this poor sunken boat! 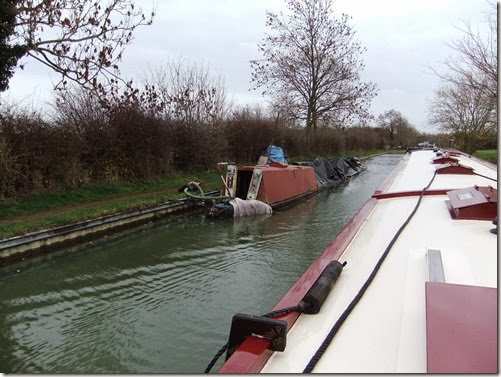 We passed the new marina at Cropredy, and even the second phase is now filling up with boats fast!

By the time we reached the 24hr moorings above Cropredy lock we had had enough of the wind, so decided to stop and booked a table in the Brasenose Arms for dinner as a treat!

On Sunday, as we filled the water tank it decided to rain – and carried on raining for the rest of the day!

We plodded on down the last 4 locks towards Banbury, getting wetter by the minute, but were cheered up by this chap on the final run in. 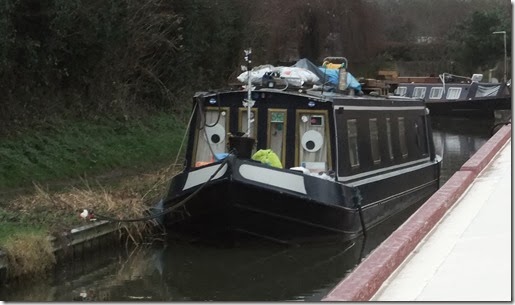 Is this an unusual place for a photograph? Outside the house! 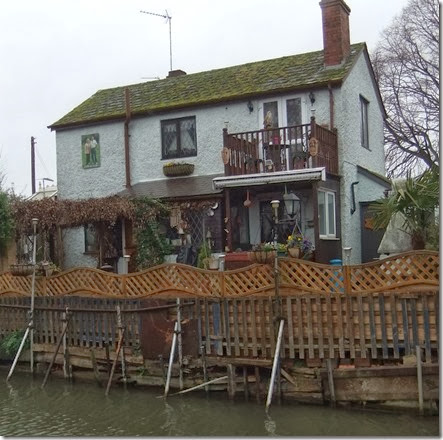 We moored up in Spiceball Park and decided to chill out for the rest of the day!

Monday we did a bit of christmas shopping – and I found my tree! 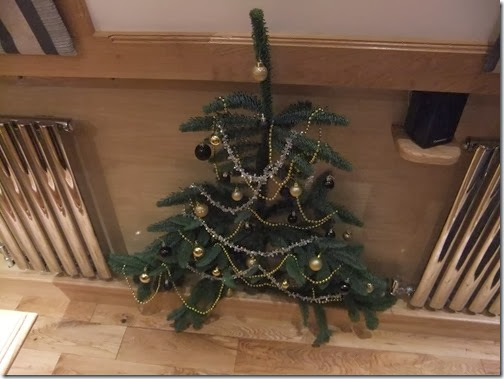 I have been planning my flat xmas tree since before the boat was built – and this is just perfect!

Tuesday we managed a quick chat with Sue and Vic from No Problem before they moved off towards Cropredy – we will catch up with them again later, it was nice to finally meet them after reading their blog for years! 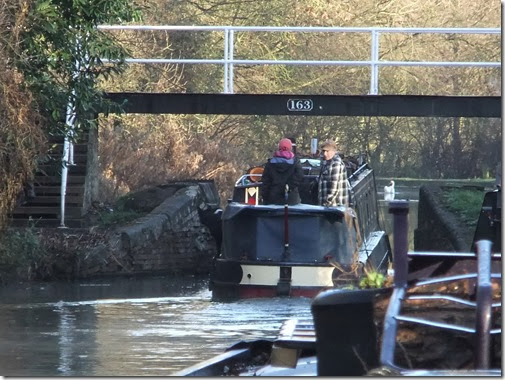 We popped over to Tesco to stock up again (who drinks all the alcohol – Rudolph!!) and now we are all set to head off again tomorrow. We are aiming to be at Braunston for Christmas!