Running down at Braunston!

We left Wigrams Marina on Thursday 16th with a fully charged battery bank and a full tank of water, and moored up at Braunston, opposite the Boathouse Pub (again!).

The newly fitted heat exchanger supplied hot water to the radiators for the journey and kept the boat nicely warm – as did the sun that shone brightly on the way! 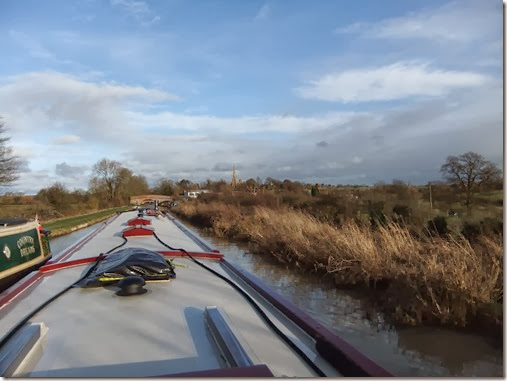 Our instruction from Graeme was to run the batteries right down to 20% capacity to check that they were now working correctly.

For those of you that understand batteries (that's not us by the way – we are still learning!) we have 24 x 2volt cells that equal 800Ah and 48volts, and they are PB deep discharge batteries! They supply us with “household” mains  electricity to run our appliances – fridge, freezer, dishwasher, washer/dryer, electric double oven and induction hob without having to run the engine.

So we sat at Braunston, being really lazy, just going for the odd walk to visit the shop and pubs, whilst still using all our appliances as normal – we did treat ourselves to Sunday Lunch at the Boathouse on Sunday though!

Braunston was incredibly quiet – not many boats moored opposite the pub or along by the marina! 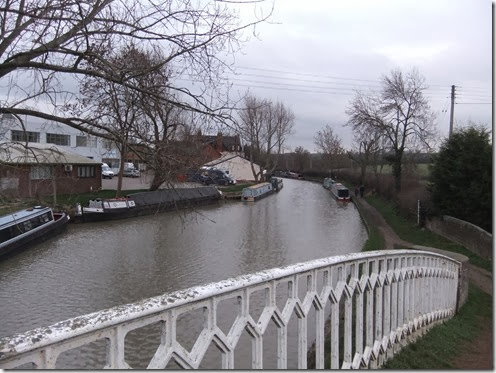 By the time we got to Tuesday morning we had used 620Ah out of the battery bank and we couldn't boil the (electric) kettle until we started the engine! Hoorah! Five days without running the engine whilst still using everything on board! Success, batteries now performing as they should!

Time to move (and of course fill up with water) so we headed up towards the marina and water point.

As we turn in the marina entrance you can see no other boats moored! 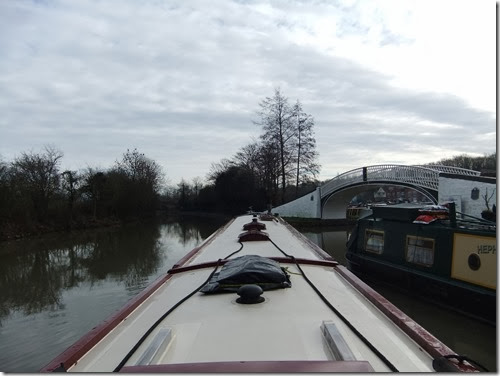 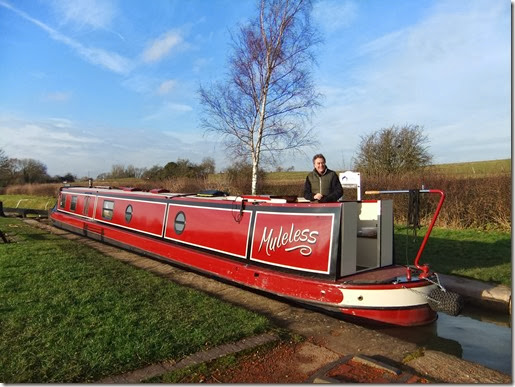 It was another glorious sunny day, but it did get cold in the shade! 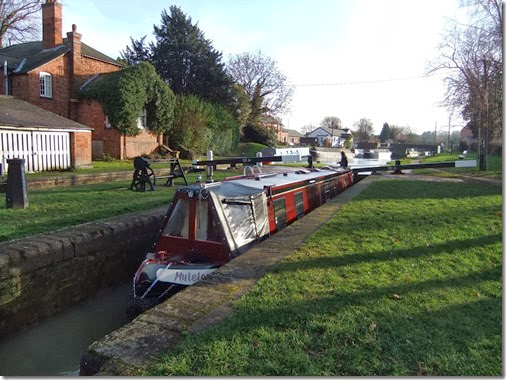 As we passed the golf course we spied Derwent 6 moored up and Al had just arrived back from shopping – we shouted hello as we passed, and she posed for a picture! 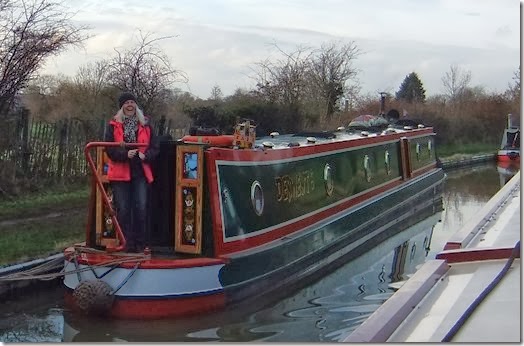 One day, we will moor close to them and have a proper chat!

A bit further up we went past Clifton Cruisers and spied Waiouru hiding behind another boat. 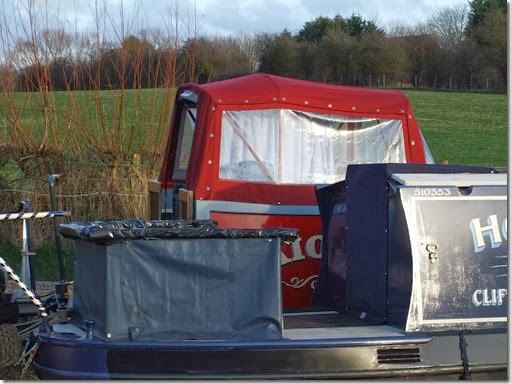 Unusually, I was steering for a few minutes (still in training – I could never get the hang of steering the hire boats!) and Gary took my picture for a change! 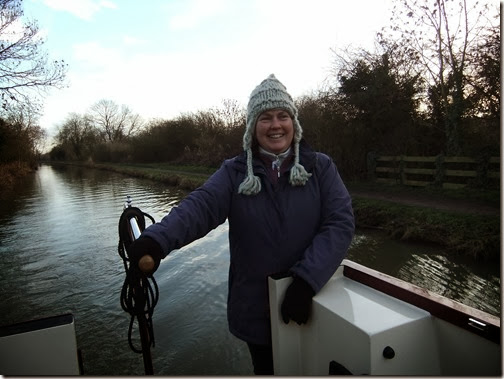 We moored up at Brownsover, after 4 hours and had boosted the batteries back up to 78%. Hopefully (wont speak too loudly) our alternator problems are now behind us!

We stayed at Brownsover for 2 nights, visiting Tesco and all the other shops there and then pulled away, turned round at the winding hole by the Rugby Wharf Junction and headed back towards Hillmorton – passing Brownsover looking like a summers day (except for no leaves on the trees!) 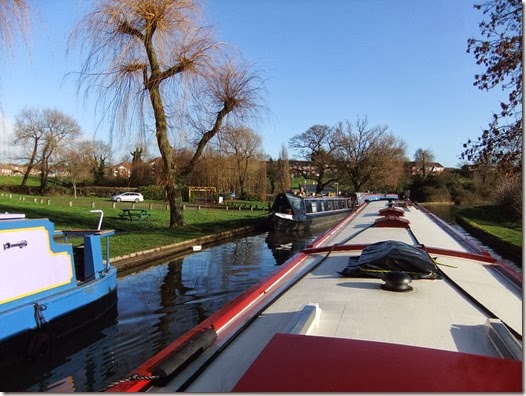 We passed through Hillmorton Locks again (well, I do need some exercise after our lazy 5 days!) and moored for the night at Onley, just as it started to rain. 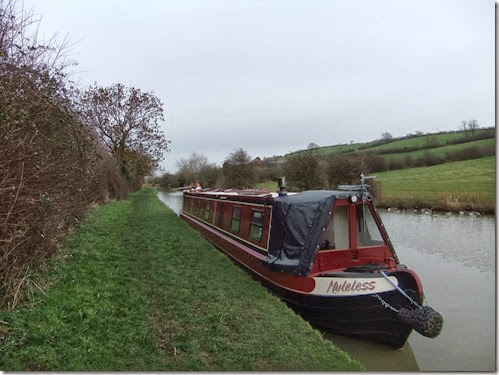 We are now moored back at Braunston again. I am heading down south next week and will be leaving Gary on the boat – give him a wave if you see him!

Normal blogging will resume when I return!

A quiet start to the New Year! 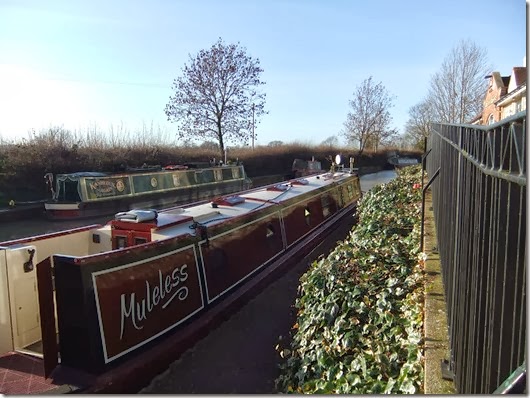 On 29 Dec, after a relaxing evening moored outside the Boathouse we decided it was time to leave Braunston whilst the sun was out!

We headed down to Wigrams Marina and settled onto our usual pontoon. As we didnt want to move too far the best option was to plug into power to recharge our batteries – and have water on tap right outside the boat.

We thought it might be fun to be among a load of boats for New Year – when at home down south on New Years Eve you always hear a load of boat hooters at midnight – and we thought being in the marina (rather than in a pub) we could do the same with our horn!

As the hour approached on New Years Eve, with glasses of wine in hand, we climbed out of the boat and stood on the pontoon – Gary was poised to run down the back to give a blast on the horn – but it was quiet in the marina – no-one emerged from boats, no-one blew their horn – so we returned inside the boat quite disappointed! Maybe next year!!

On 2nd January we left the Marina, and returned to Braunston, it was chilly, not raining so we enjoyed being on the move again! 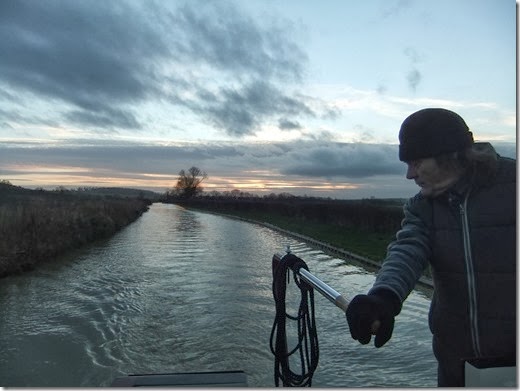 We moored near the Stop House in Braunston, and visited the butcher to top up supplies. There was still a lot of water and mud on the towpath from all that rain! 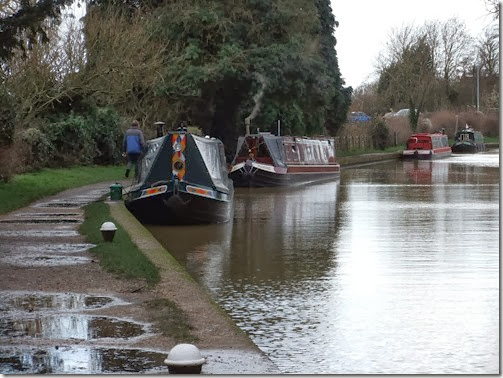 By Saturday (4 Jan) we decided we had spent enough time at Braunston and needed to go shopping, so would head towards Rugby.

Of course as soon as we decided to move it rained! Rudolph helped us top up with water - 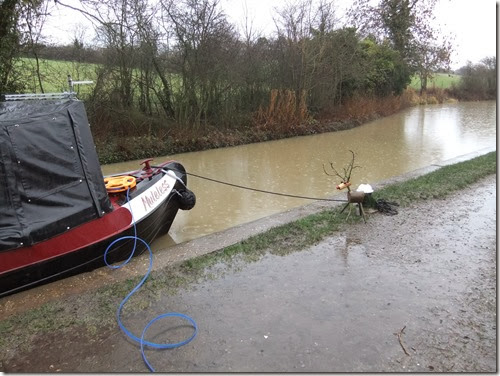 and then decided that he had had enough of the rain and wanted to go and find some snow – so off he went! 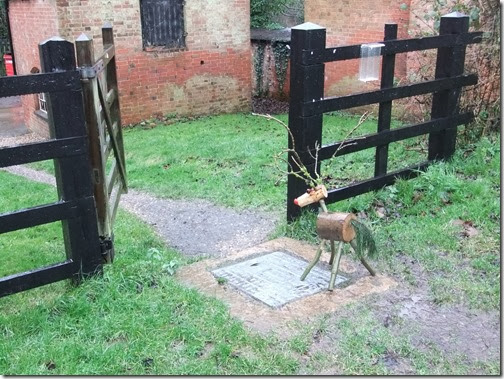 We headed off towards Rugby, and got as far as Hillmorton Locks, where we decided to call it a day and moored at the top.

The next day we headed down the three locks and stopped at the bottom to fill with water – we cant get very close here! 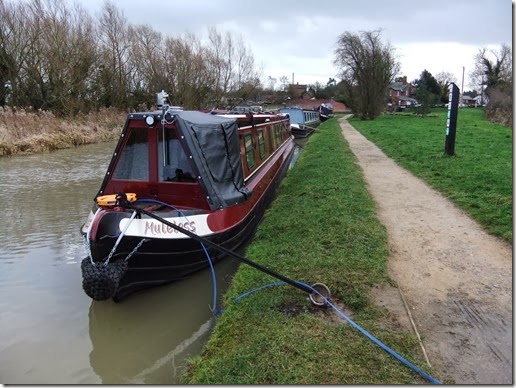 The clouds looked ominous back the way we came – but it was much brighter ahead of us! 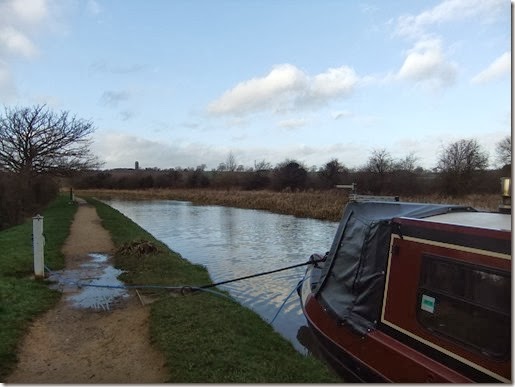 We headed on towards Rugby, and managed to find a spot on the 24 hour moorings at Brownsover so we could visit Tesco and fill up our cupboards!

We checked out the cinema too – as we wanted to see the 2nd instalment of the Hobbit films in a few days time.

The next day we moved off again, still heading north on the Oxford Canal, out of Rugby and back into the country. We found a spot just before All Oaks Wood, where the hedge was low enough for us to pick up a satellite signal. Although the canal looked wide, it was very silted up and we nearly got stuck on a sand bank! 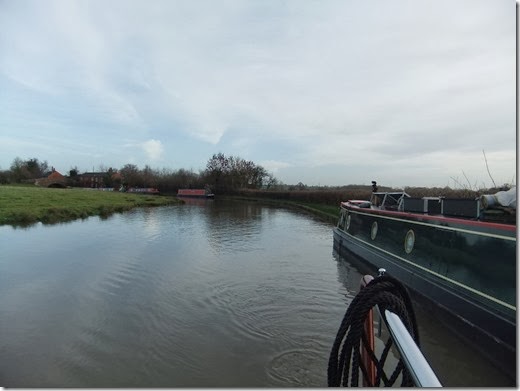 Pulling away from our mooring next morning.

We were heading for Rose Narrowboats at Stretton Stop, as our loo tank (which we had so much trouble with at Braunston and probably didnt empty properly in the end – we ran out of time!) was starting to look full on the gauge, so we needed a proper pump out!

On the way through All Oaks Wood we could see someone had been busy chopping back the vegetation on the offside. 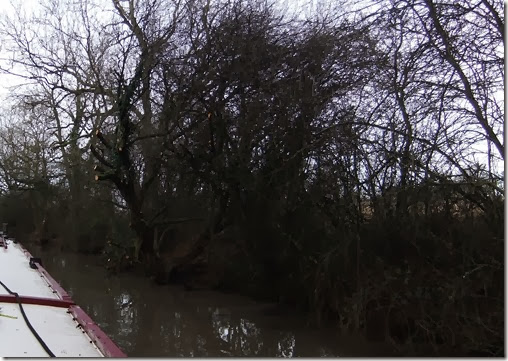 Next we passed the big tree that had to be cleared after blocking the canal during the storms. 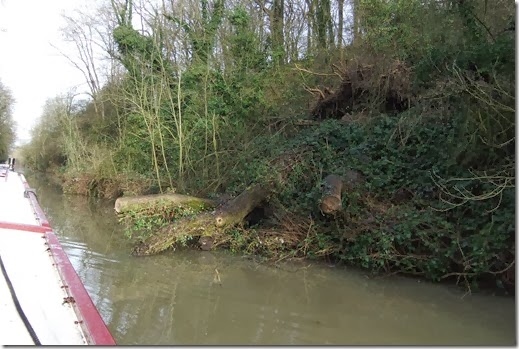 We arrived at Rose Narrowboats and had to tie up alongside two other boats to get pumped out – which meant we were three abreast on the canal! Good job no-one came past us – it would have been a tight squeeze!

We then turned round in the entrance to the arm there, and reversed back onto the water point to fill up – again we cant get close in at this water point either! 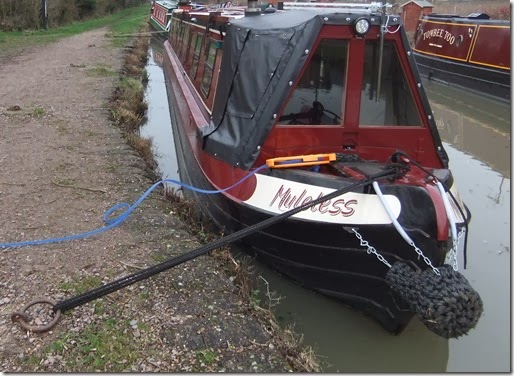 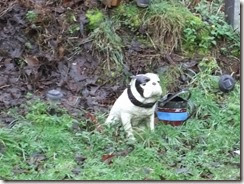 and a flashing teddy! 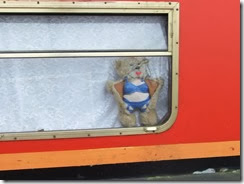 Then just by the entrance to Brinklow Marina we found the crew cutting back the vegetation. 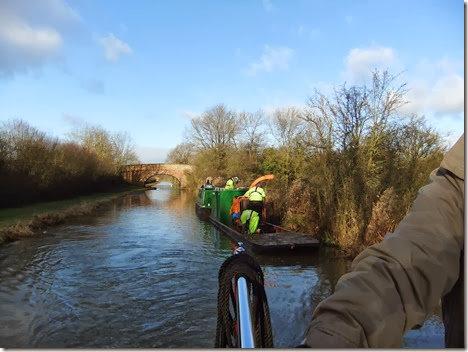 and then this little boat causing an obstruction as it was only tied at the bow – but at least there was still room to pass! 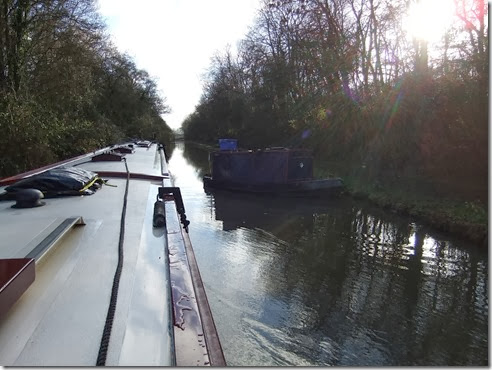 Even though the sun was out we decided to pull back in to the spot we left in the morning and moor up for the night – and shortly after the rain came down again, so that was a good move!

Thursday dawned as a lovely sunny day again, so we moved off and headed back to Brownsover and moored up again on the 24 hour spots. We had a visit from Yvonne with some post for us, and we had a pleasant catch up.

At 4pm we headed over to the cinema to see The Hobbit, which we enjoyed, and then went over to Frankie and Bennys for a drink and some dinner.

Friday we headed off again, passing Derwent 6 moored up by the golf course – but didnt see anyone to say hello!

We filled with water again below the locks and then headed up them and moored at the top again.

Saturday was a lovely cruising day, so we headed back to Braunston again – see that blue sky! 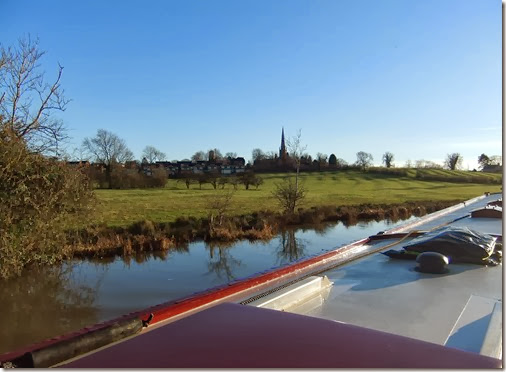 We moored up again opposite the Boathouse Pub, and as we settled down for the evening, there was a knock on the boat!

Gary went to investigate and we were surprised to see Steve and Chris from NB AmyJo! We have read their blog about selling their house, including filling in their pond, and the trials and tribulations of their boat build since before we started this blog, so it was really lovely to meet them.

We spent a lovely couple of hours comparing build notes and teething problems and discussing the usual boat subjects! As they were only on AmyJo for the weekend and had to return to Crick on Sunday we didnt get a chance to visit their lovely boat, so will look forward to that another time.

Apologies for the blurred photo – I hadnt had THAT much to drink – honest!! At least I remembered to take a photo! 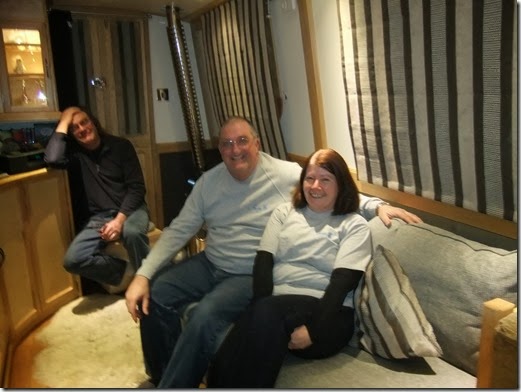 On Sunday we left Braunston again heading for Wigrams Marina. It was quite cold on the back of the boat – but these chaps must have been freezing! 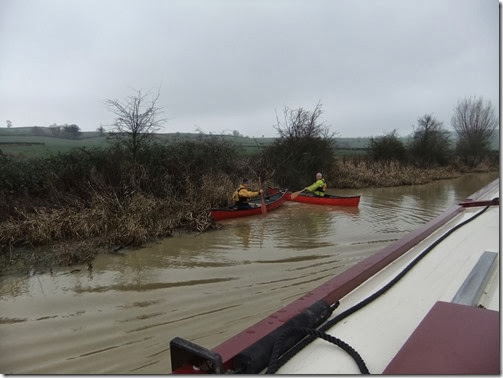 And just before we turned into Wigrams we were caught up by some more cannoeists – these ones had their dogs running the towpath with them! 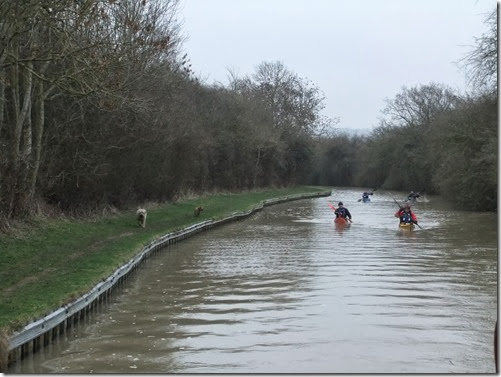 We have returned to Wigrams for a few days as our battery bank has not been performing as it should – and having discussed this with Graeme from Hybrid Marine, he thinks it is because the faulty alternators had not been charging their half of the battery bank properly, so we are doing a series of forced equalisations to hopefully cure this problem – watch this space for updates!

Whilst we are here, Mark from MGM is also coming to fit a heat exchanger to the Hurricane heating system, which uses the waste heat from the engine to help heat the boat for free!

We should be on our way again on Thursday 16th, so the blog will continue then!