On Friday 22 March, we made the trek to Leicester to see the latest progress on Muleless.

The first thing we noticed as we drove through the gates was that Muleless was moored outside! 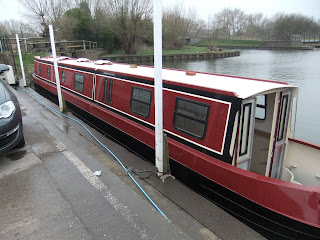 After a quick cuppa in the office with Martin discussing the build we were desperate to climb aboard and see the progress - we were not disappointed! 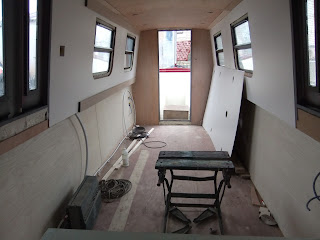 The ash at the bottom and cream wall and roof panels are coming along nicely! Martin had tacked up the oak trim so that we could see the full effect.

The workmate in the picture is positioned to represent the far end of the dinette. 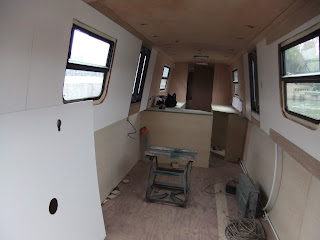 The view in the other direction shows the "dinette" and galley. 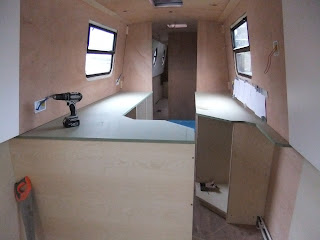 The galley is still at the template stage, but everything is fitting in nicely. 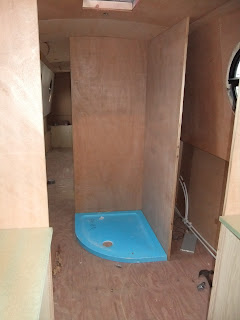 Looking through to the walk through shower room - the calorifier will fit next to the shower, with cupboards above.

Despite the freezing conditions, we had to stand on the stern to take advantage of the magnificent view of the roof - this time complete with hatch! 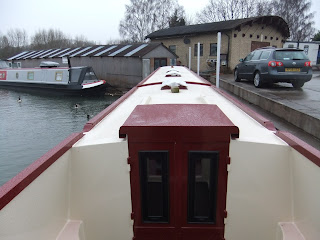 We spent the rest of the weekend, and this weekend doing as we were told!!!

Things have already started arriving at the boat yard, so we cant wait to see it all next week.

This boating lark is exhausting!!


At last, after putting the house up for sale in January 2012, and agreeing an offer at the end of September 2012, We have finally sold the house!

On a very damp and rainy, but not cold, Friday 8 March we moved out of our house and into a flat – stage 1 of downsizing to live on the boat.

The house sale was a long drawn out affair, the sale chain collapsed twice – the second time just days before exchange was due in December!

We were lucky that the third time round the sale chain had shortened to just three houses and all seemed to be going to schedule, but again various hiccups at the last minute left us thinking that exchange which had been due on 22 February was not going to happen! We were right – last minute negotiations with the new buyers of the bottom house in the chain meant that paperwork was not ready for that day.

We were told that everything would be sorted for Tuesday 26th, so I went out flat hunting! As we were only looking to rent, I couldn’t start looking until exchange was imminent!

Whilst out flat hunting on the 26th (anticipating exchange that day) a phone call from the solicitor dashed our hopes as the document signing by the bottom buyers wouldn’t be until too late in the day to exchange!

With completion still set as 8 March, things were getting tight to arrange a flat to move into, and we had to decide whether to move the date and whether to put a deposit on the lovely flat I had just seen.

The letting agent was extremely understanding and helpful, so not even knowing if the sale was definitely going to happen (well, we had been let down so many times already), we bit the bullet and put a deposit down.

True to form, on Wednesday morning the solicitor rang to say that cleared funds were not available from the bottom buyers, and they had to wait for them to arrive, so the exchange might not happen until Friday! By this stage we were pulling our hair out! Would we be able to move in to the flat with only 1 weeks notice – or should we move completion yet again!

Just as total despair was setting in, at about 2pm our solicitor rang to say the funds had cleared and exchange could go ahead and were we still happy to complete on 8 March!

I almost screamed down the phone at the poor man! YES – just get it done! At last, no turning back, no changing dates – oh god, just a lot of organising and arranging to move. I phoned Gary at work and virtually yelled down the phone before he had chance to say hello – ITS HAPPENED – WE HAVE EXCHANGED!!!

So this is it, no more going slow on the boat build. We have been so lucky that MGM have been so understanding, and although they have been working on other boats at their yard, they have not had another new boat to build, so ours can now be put into full time build.

So on Saturday 9 March, with the flat still in chaos and boxes everywhere, we just had to visit MGM to see Muleless and discuss the way forward with Martin.

We had visited on 9 February, but as the only change at that point had been the bulkheads being in place, we hadn’t updated the blog – so here are those pictures. 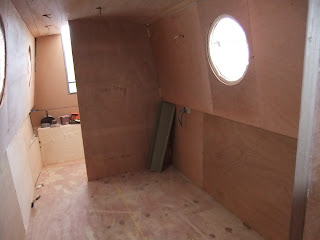 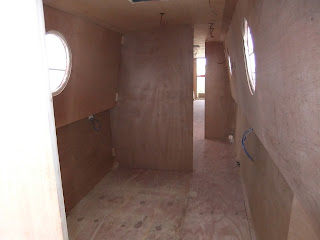 Bedroom – looking to bow and bathroom. 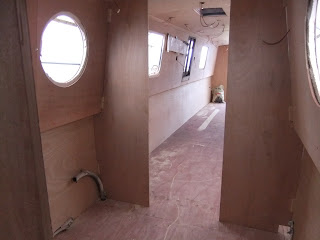 Bathroom – looking to bow and galley. 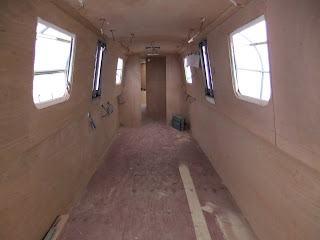 Looking to stern saloon, dinette, and galley to bathroom.

This visit the windows had been fitted to make the boat watertight in case the house sale had stalled again and we hadn’t had chance to see them yet, so were really excited – and we weren’t disappointed. 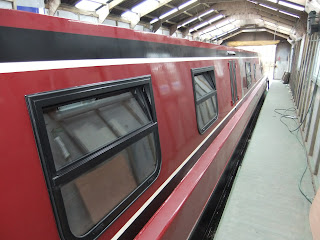 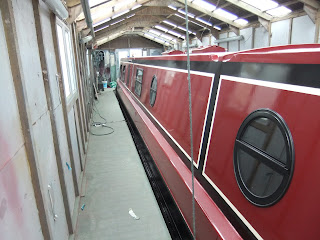 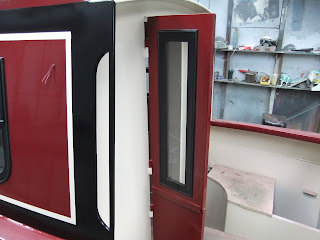 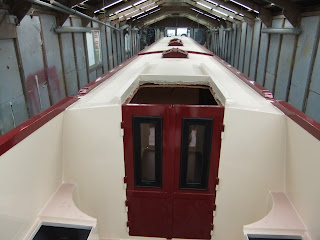 We have chosen Caldwell double glazed windows and are very pleased with them.

And a couple more pictures of the paint work. 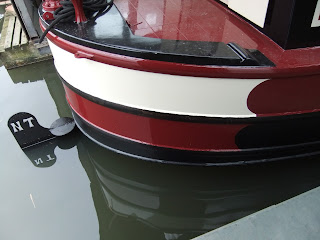 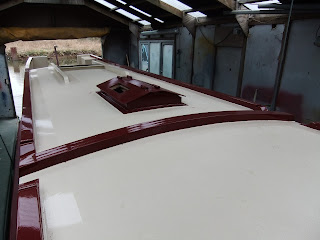 Now we will be visiting the boat fortnightly – as such a lot will be happening and so many decisions have to be made.

The plan is for Gary to retire from work and for us to move onto the boat within 6 months, so keep checking back to see our progress.