Surviving being frozen in on a modern narrowboat!

And before all you veterans out their say anything – this blog is for all our family and friends who wondered how we coped!

On 26 January we left All Oaks Wood, and topped up the water tank at Rose Narrowboats.

Whilst we were there the fuel boat Auriga came by, so Gary nipped over and opened the swing bridge for him. 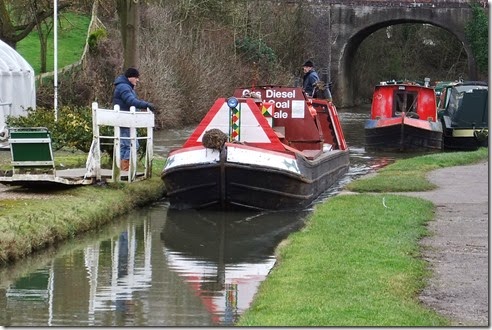 We moored up at Hawkesbury Junction at 3.30pm and settled in for a couple of nights stay.

The original plan was to get topped up with diesel from Callisto on Tuesday and then head down into Coventry Basin on Wednesday. The plans changed slightly as Callisto had to wait for a diesel delivery at the junction Wednesday morning before he could fill us up. 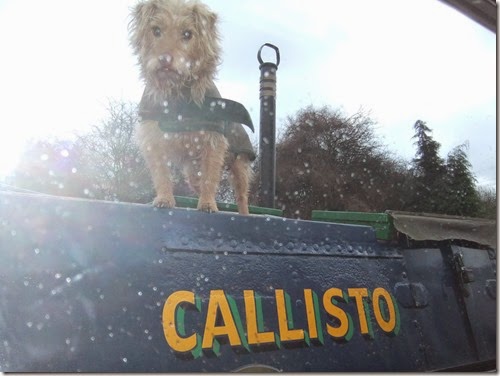 There was some very sleety rain, so I stayed in the warm whilst Gary and Mark did the necessary – even Cally had her coat on ready for the bad weather! 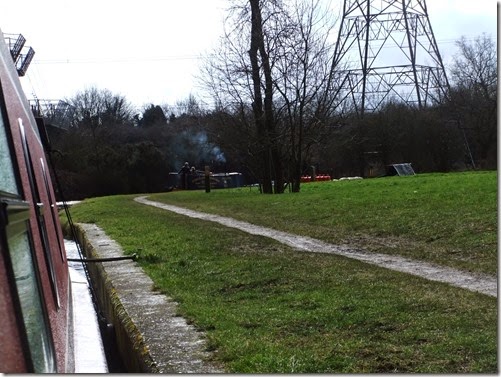 As we waved Mark and Cally goodbye for the foreseeable future there was a really heavy cloudburst – so we stayed where we were, and just visited the Greyhound Inn for lunch!

On Thursday, instead of taking the boat down into the basin, we decided to visit Coventry by bus to do our retail therapy (20 minutes by bus - 2 1/2 hours by boat!) – and of course had to visit “Spoons” for Curry Club!

When it was time to return to the boat, the snow that had been falling on and off for most of the day, turned into a blizzard! We were surprised how white everything had become!

We were soon back aboard and all cozy and warm!

Friday dawned with a snowy landscape – but the canal wasnt frozen. 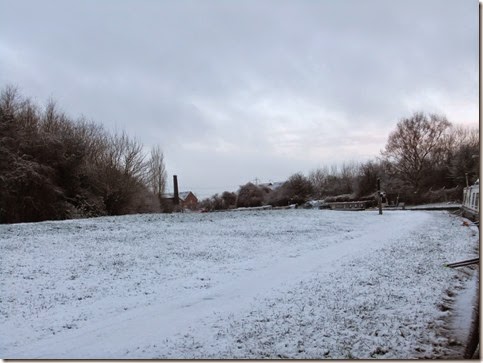 The forecast for the next couple of days was windy, so we thought that we would stay at Hawskesbury Junction, but would top up with water and move through the stop lock and moor on the Coventry Canal – just around the corner! 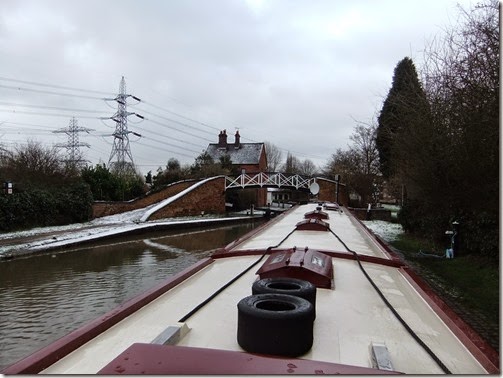 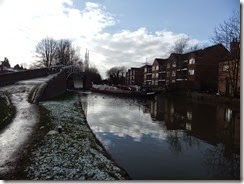 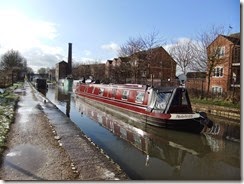 On Sunday we had decided to visit the Greyhound again, this time for Sunday Lunch – and to our surprise found ourselves surrounded by Wasps fans (Coventry Rugby team) in a very busy pub – but we still had a very enjoyable dinner!

At midnight, we had just snuggled up in bed when a text came through – the announcement of the birth of Natalie and Matt’s baby boy – Aiden Paul, weighing in at a healthy 5lb 8oz! Congratulations to Mum and Dad and both sets of Grandparents! 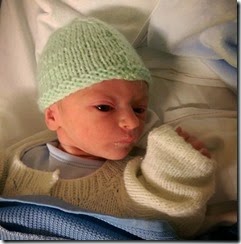 Monday morning we discovered that the canal had frozen over and this time it was nearly an inch thick! We wouldnt be going anywhere!

At about 11am, one of the boats that normally moors on the permit holder side, but had moored on the towpath side further in front of us, made a move! First he had to turn around (which took a time to break up the ice enough) and then he headed back past us all the way to the junction, turned around again, headed back to the water point, filled up and then returned to his mooring which was just a boat length behind us! There was a lot of ice breaking involved! 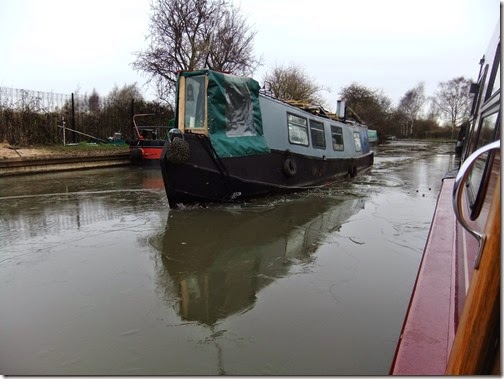 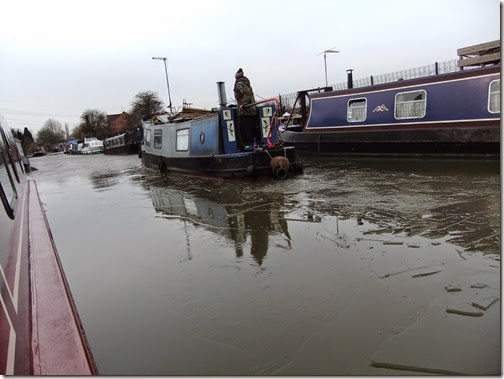 No-one else was brave enough to move – but by 1.30 we bit the bullet and thought we would try to reverse back to the water point to fill up!

It took a whilst (moving backwards through slabs of ice, when steering in reverse normally can be tricky!) but we made it, and filled up our water tank and then returned to our mooring spot, hoping that the next day if the canal didnt freeze overnight we would be able to move straight off!

No chance! The next morning the canal had re-frozen (even thicker this time – with ice sheets piling up in places) and we had a sprinkling of snow on top too – very pretty! 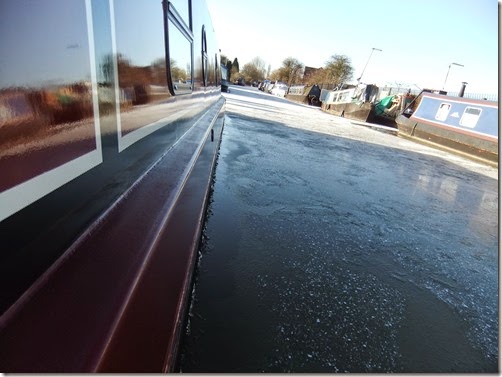 So we stayed put again!

When we returned from a visit to the shop the ice was melting slightly on top – but it was still solid – good job we went for water the day before! 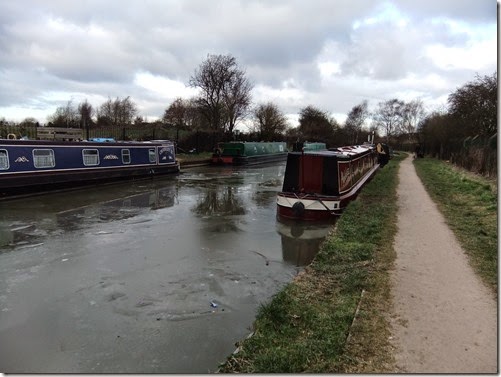 The next day the ice was even thicker as no-one had broken it up again.

Thursday was Garys 60th birthday. We watched the boat opposite us break the ice and head to the water point and reverse back to his mooring. 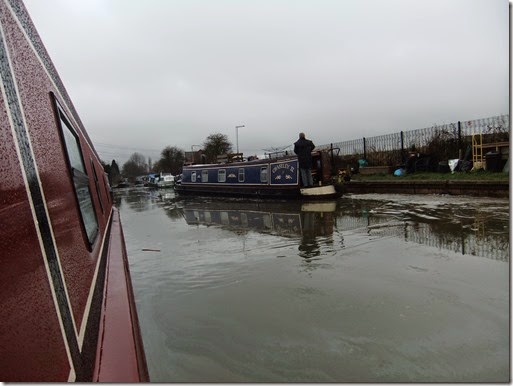 Still no-one else was moving so the ice ahead on the canal stayed solid!

Our toilet tank had now filled up to almost capacity – and as there was no chance of reaching a marina for a pump out – we had to do a self pump out!

As it was Garys birthday we decided that 4 tubs would do and with luck we would be able to get to Starline in Nuneaton for a pump out before we filled up again! (or we would have to do some more tubs at that time).

Poor Gary had to put the tub on our trolley and wheel it about 350yds (including up and over the bridge over the junction) and then lift the tub to empty it into the elsan and wheel it back empty – 4 times! Its a good job he’s a very fit and healthy 60!!!! Of course, I did my bit too – I pumped! (As a guide one tub would be about as heavy as 2 car batteries.)

After all that work we headed to the Greyhound Inn again for a celebratory dinner and drinks!

At about 10am there was a loud crunching/crashing sound and a hire boat battled its way past us! 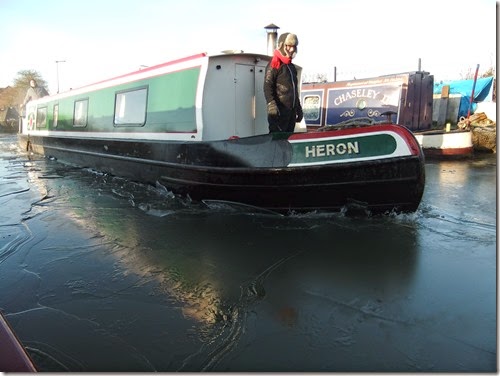 As the day went on the ice melted a bit more and there were large patches with no ice so we thought it was time to reverse back for water again! 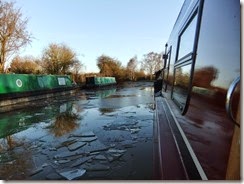 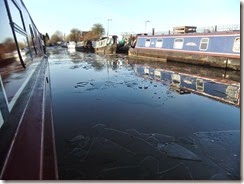 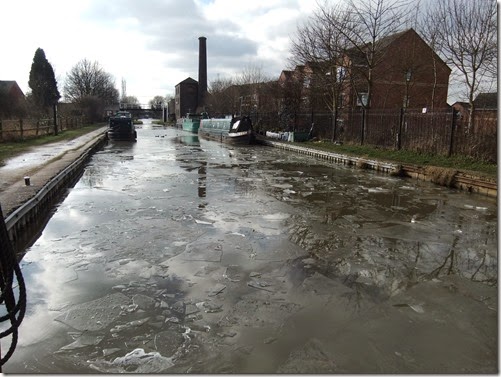 By the time we had filled up and were returning to our mooring spot we were hopeful that the ice would all melt by morning. 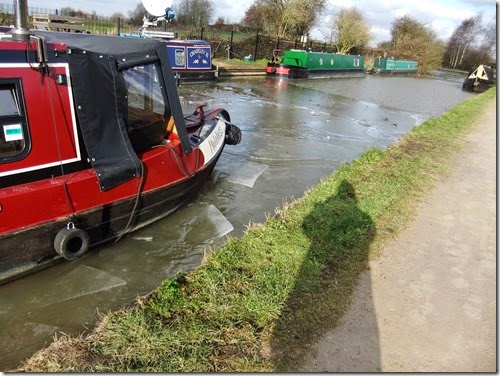 Unfortunately we were wrong again! Saturday the canal had frozen over solid again!

Yvonne and Roy and were coming to visit, (and bringing Freddy one of their grandsons too) so again we headed to the Greyhound! We had a lovely meal on the table right by the fire, so we were toasty and warm. Freddy had a good kiddy meal too – a nice small piece of battered fish with chips and beans – excellent value at £4.99 – no naff fish fingers there!

We went for a walk along the canal and Freddy and Gary tried breaking some ice!

Our visitors left and we retired to the boat – full as usual!

On Sunday the canal was still frozen (surprise!).

We decided to walk to the Tesco in Bedworth to top up our supplies – and we found a Wetherspoons! So we went in for Sunday Lunch – and a lovely one it was too!

As we returned to the boat we noticed the ice had been broken up by a boat moving through, and the sun was strong enough to melt it again – dare we hope to be able to get away!

Monday morning we looked out – and the ice was melting – we could escape!

We had soon reversed back to the water point and were topping up the tank and then we were off – bye bye Hawkesbury Junction – hope we dont see you again too soon! 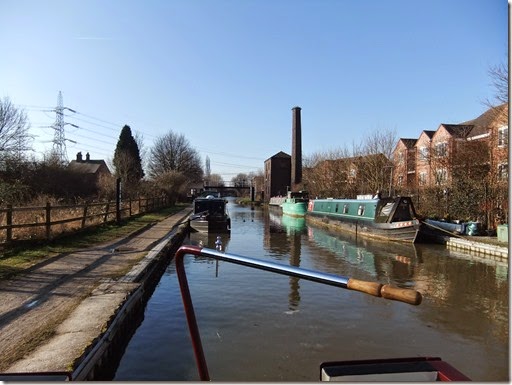 We encountered several “ice flows” as we went, but nothing too solid. 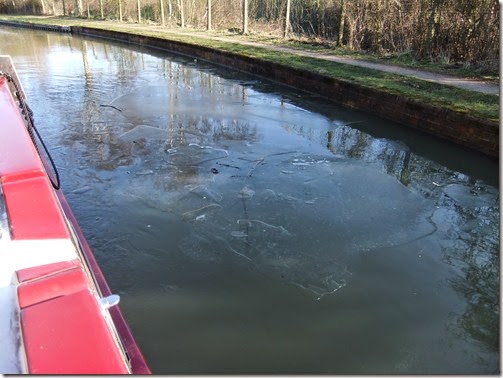 We stopped off at Starline in Nuneaton for our pump out and some diesel – at 65p/l we topped everything right up!

At 4.20pm we moored up at the top of the Atherstone flight – a change of scenery and different shops at last!

After reading some other blogs and how they cope as new boaters (NB AmyJo) and their first winter cruising instead of in a marina (NB Ferndale) I thought I would do the same.

Planning is key – we watch the weather forecast avidly (not that it is always right!) and during these winter months we plan to only stop near water points and elsan points. This means we now have longer journeys than our summer “norm”, but that we have one or two rest days in between.

Our water tank will last us a week (or possibly longer if I try hard!), but we dont skimp with water. Yes, we turn of the shower whilst soaping up, and dont run the tap whilst brushing teeth – but as Gary will tell you, I still wallow in the shower!

Whilst we were at Hawkesbury I only used the washing machine when we were at the water point – but then I usually only put it on every other day anyway!

If we hadn’t been able to move to the water point we would have used our “other” tub and ferried 25 litres of water a time from the water point – even if that meant lots of trips – as at least this would have kept Gary from getting bored which is actually the biggest problem if we stay too long in one place!!!

We keep the boat warm using the diesel Reflex stove (which we kept running 24/7 whilst it was icy, on the lowest setting) and our Hurricane runs the central heating and hot water to supplement this. So overnight, if the temperature really drops, the heating kicks in, and in the morning it runs for 2 hours raising the temperature to daytime level (and then only kicking in occasionally during the day) and also supplying hot water for me to wallow in, in the shower!

If we are on the move, we turn off the Reflex and use the heat exchanger from the engine to run the radiators as we move, so the boat is always warm when we stop, and Gary then lights the Reflex at his leisure.

Our loo tank will last us about 3 weeks normally, but we like to do a self pump out when we can before it gets half full – just in case!

Our other main need is electricity – battery power! Our batteries will last us about 5 days before needing charging – remember we are all electric – no gas!

We can disconnect the prop and then run the engine in gear (no prop turning) so that we can engage the hybrid generator to charge the batteries quicker – but Gary doesnt like to do this too often, and as this time we were able to reverse the boat to the water point every few days we opted to just run the engine “normally” using just the twin 24amp alternators to charge whilst in “neutral”. This meant we ran the engine for about 1 hour each afternoon, and then again for less than an hour whilst we cooked dinner.

I still used the dishwasher on a 30min wash programme daily, we keep all the saloon/dinette/galley lights on all the time during darkness, we have 240volt fridge and freezer (normal household appliances), and my Sky+HD box and TV always on standby and the inverter NEVER turned off.

Gary likes to listen to music – but I like to watch TV – and I never have to worry about having enough power – just make sure the satellite dish is pointing the right way.

Our criteria when planning the boat was to be able to live on board the same as we did in our house – without having to worry about having enough power – and the hybrid system definitely achieves this goal – I even use my hairdryer whenever I want!