So Thursday last week saw us leaving our mooring by the Two Boats pub in Long Itchington, and stopping at the water point just half a mile on! 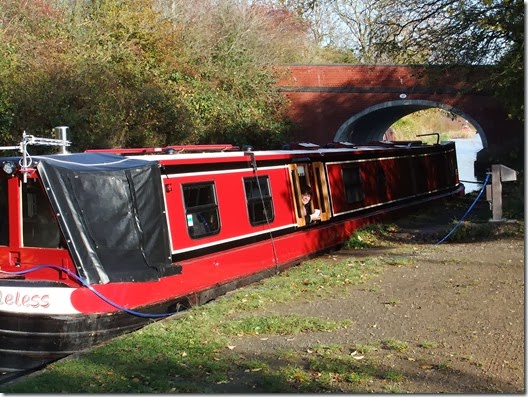 As you can see, the sun was out again!

We headed off towards the Bascote locks and were enjoying working our way down in the sun. 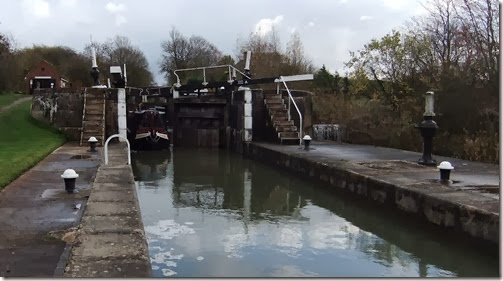 Leaving the staircase pair and heading for the next two locks. 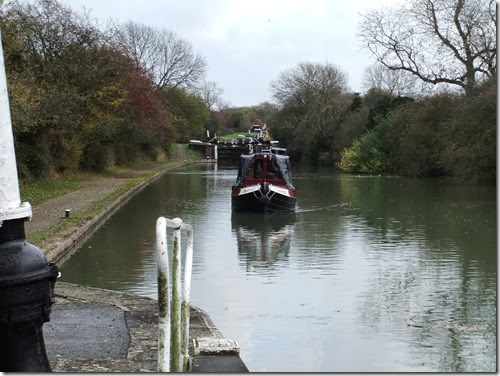 It amazes me how fast the water comes through when opening the paddles, so I got Gary to wind the paddle so I could take a picture! 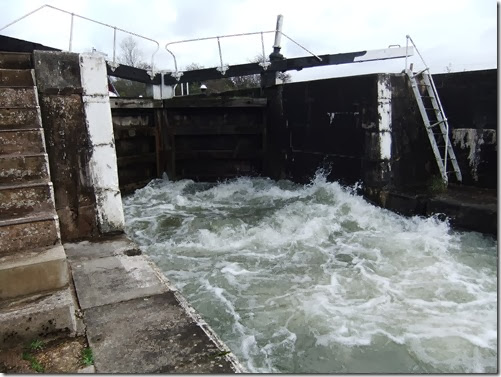 We made good progress, and moored for the night below Radford Lock (again!)

On Friday the plan was to find a nice mooring in Warwick so that Terry and Wendy could visit on Saturday, so we set off and headed through Leamington, no rain this time, so I managed to take some pictures!

I think this little sailing boat had taken a wrong “tern”! 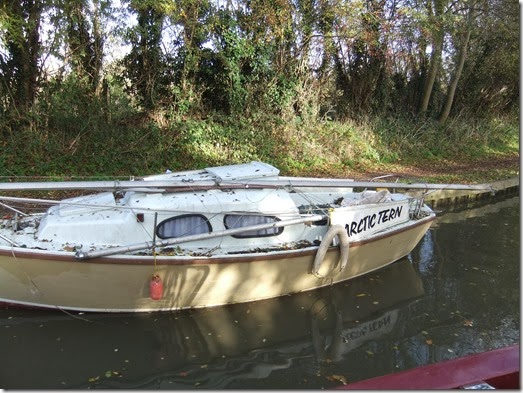 Passing the mooring we used last time for Asda! 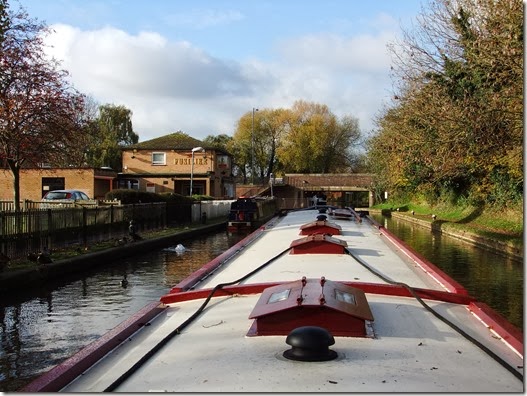 Passing through Leamington Old Town where old bridges are followed by new flats! 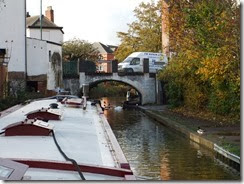 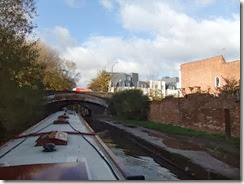 We spied Morrisons, so decided to stop for brunch in their cafe and some shopping! 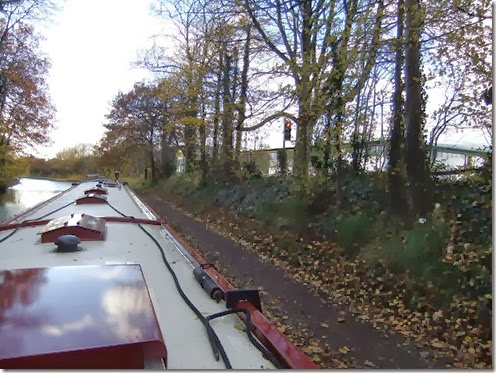 We passed this posh looking pub 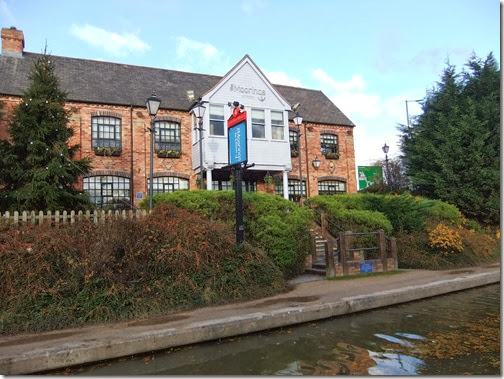 Then we passed more new flats by the winding hole we used last time and spied another shopping opportunity ahead, but didnt stop this time! 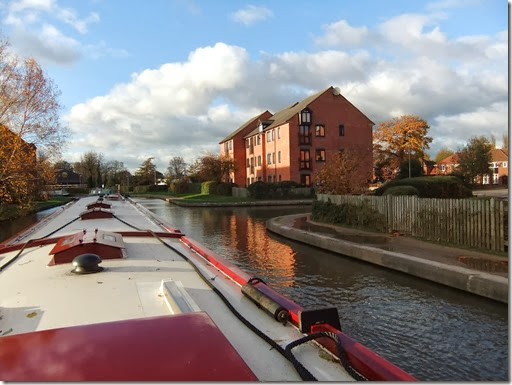 Next we passed over the railway – and the river! 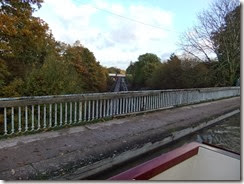 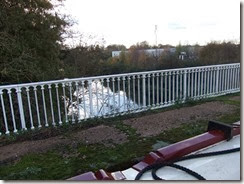 and then just round the corner loomed Tesco! 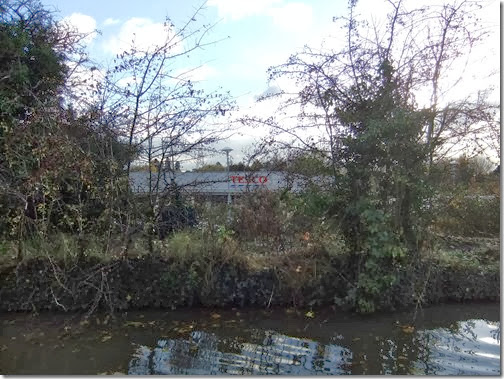 Then unfortunately there was nothing much of interest (or any nice moorings) until we reached the Cape locks. 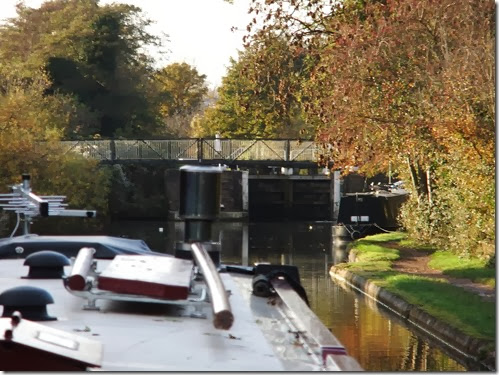 At the top we found the Cape of Good Hope Pub 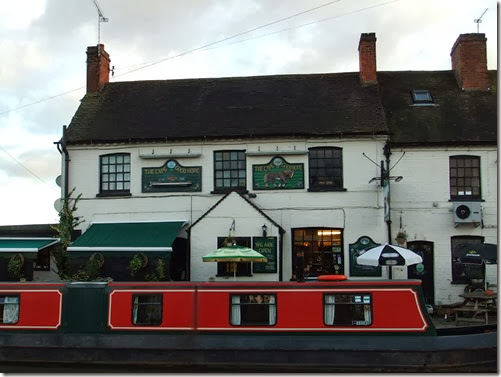 There was a water point opposite the pub and a large area of 48 hr moorings. As we were only about half a mile away from the junction with the Saltisford Arm where we had to turn round, we decided to turn first before mooring up. 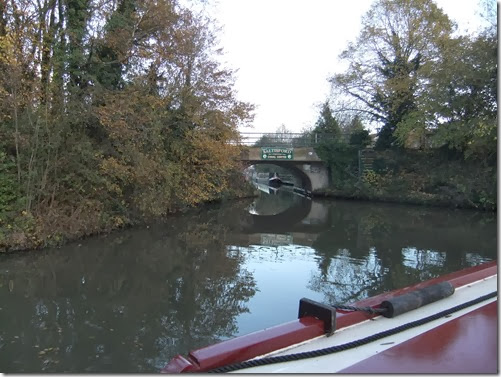 We couldnt go any further along the Grand Union, as just a bit further up the Hatton Flight started, and as there were works on the top locks there was no passage through! Do them another time!

We moored up just before the water point (so it would be in easy reach on Sunday). Unfortunately the flats opposite meant that the sun couldnt find us! 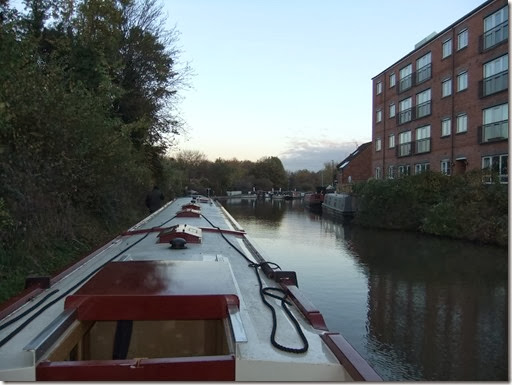 We had to check out the area for possible parking places for our visitors, and found ourselves in the Cape of Good Hope Pub (which according to ECanal Maps which I have on my smart phone was closed!) As we sat having a drink I made sure I sent an update message stating the pub was definately open!

On Saturday we spent time giving the boat a wash and brush up to make sure she was respectable for our visitors who arrived at around 3pm.

Unfortunately I didnt take any photos – again!! I must try harder!

We had a lovely afternoon and evening catching up with Terry and Wendy and showing them around the boat. It was lovely to see you guys, and next time we will definately take you for a cruise!

They left about 9pm as they were going to have a busy day on Sunday at the Birmingham Christmas Market – maybe next year we will be able to visit Birmingham by boat whilst the market is on!

Sunday we decided to walk round to the bottom of the Hatton locks to check out the moorings there ready for our trip up or down, whenever that might be!

We then moved the boat forward to that convenient water tap to get a top up! 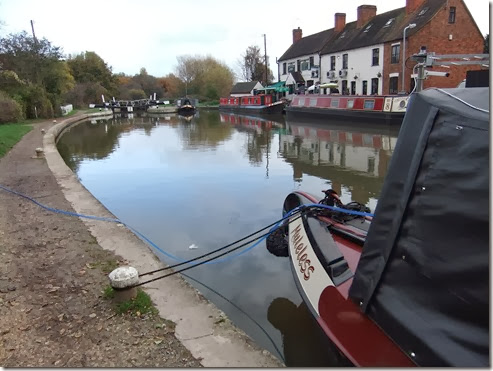 We then headed back through the locks and around Warwick again. Passing this blogger on his winter mooring (no sign of the Old Salt). 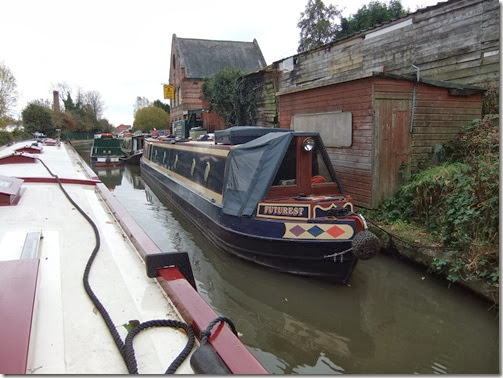 This time we decided to pop into Tesco for some supplies, and lucky for me they had a tent outside GIVING AWAY MAGNUM MINI ICECREAMS WITH BAILEYS!!! Gary had to drag me back to the boat!

We moored up below Radford lock again!

Monday saw us moving on through the familiar Radford lock, and the Fosse locks. We stopped to top the water tank too – whilst I sorted the washing (I wont be giving Gary the camera again!) 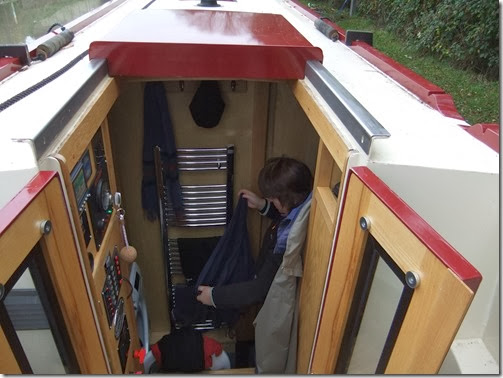 We decided to stop at Welsh Road Lock as the mooring was empty, and after mooring close to flats and trees it was nice to be in a more open spot! 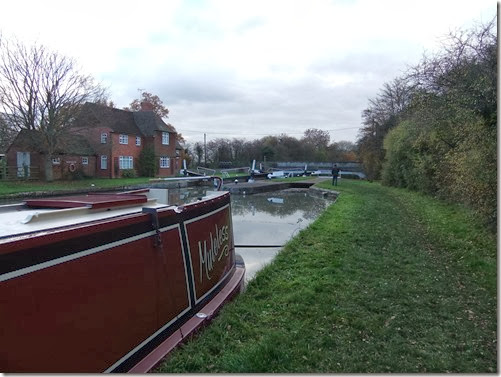 Tuesday we decided to tackle the Bascote staircase locks and the Stockton locks all in one go!

Heading up the Bascote locks. 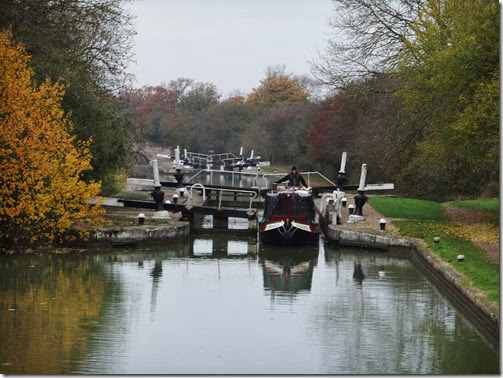 Starting up the Stockton flight. 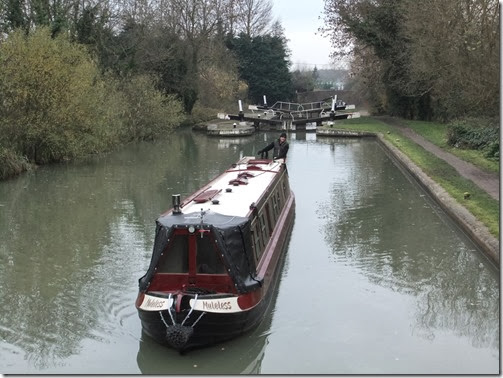 Luckily for us two boats had just come down the flight, so most of the locks were ready for us to go straight into, especially as a passing dog walking narrowboater pushed open the gates for us too!

We virtually flew up the flight making it in one hour five minutes, even with our chat to the gate opening dog walker – thank you sir! 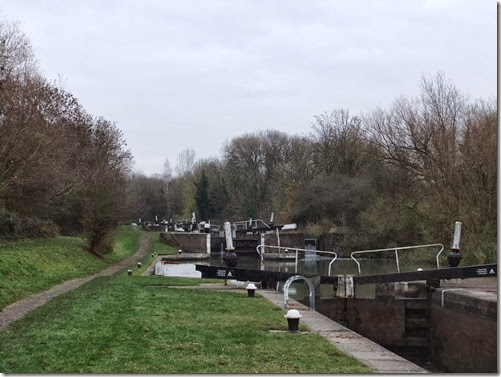 We moored up between bridges 19 and 20, knowing we only had 3 more locks to do on this stretch of the Grand Union for the time being – we wont be back this way for a few months, what with xmas commitments and winter stoppages!

Wednesday we set off up the Calcutt flight – and stopped for water at the top! (Sorry no picture today!).

We turned left on the Oxford/Grand Union and then moored up at our favourite Foxes Gate mooring – ready for the short hop to Braunston the next day.

Thursday was rather misty – but so lovely! 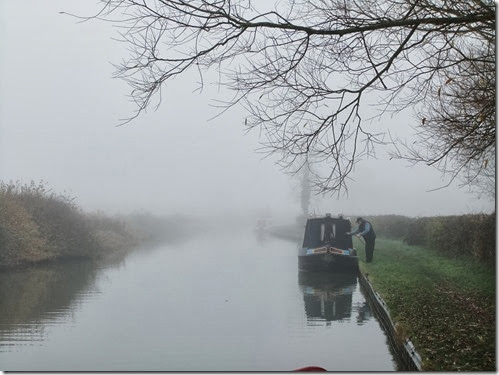 And the mist didnt stop boaters moving about – we soon followed! 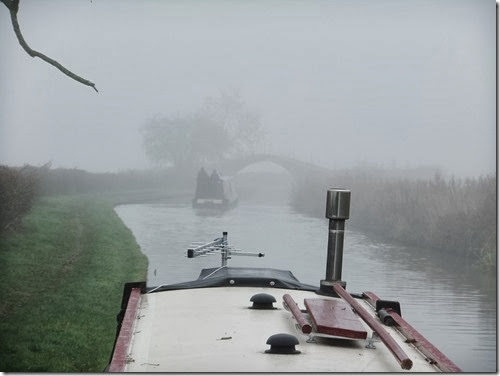 We found a mooring opposite the Boathouse Pub, and are enjoying a few days staying put!

Thursday, of course, is Pie and Pud for £6 night, at the Old Plough, so of course we had to partake again – fantastic offer, and fantastic food!

We are expecting visitors on Sunday – Nat and Matty are coming over – they havent had the guided tour of the boat yet, and one day soon we will be taking them on a cruise up the Braunston locks and through the tunnel – as a special treat for Matty!

I will try harder to get photos this time!

In the meantime, today was lovely and sunny and I tried to take a photo of the marina as we walked up the hill to the shop (after visiting the butcher yesterday to top up meat supplies!). 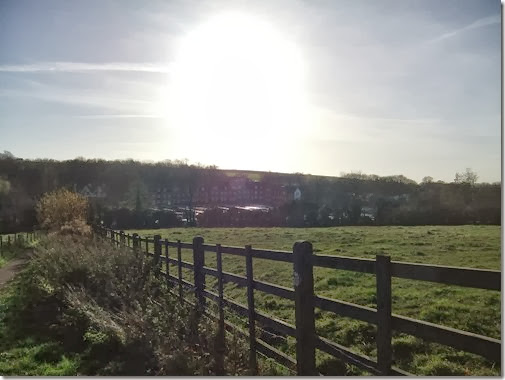 This was the best I could do – with the winter sun (lovely as it was) just in the wrong place for a picture!

And here we are, nestled under the trees (yes James, Gary has been clearing the leaves regularly!!). 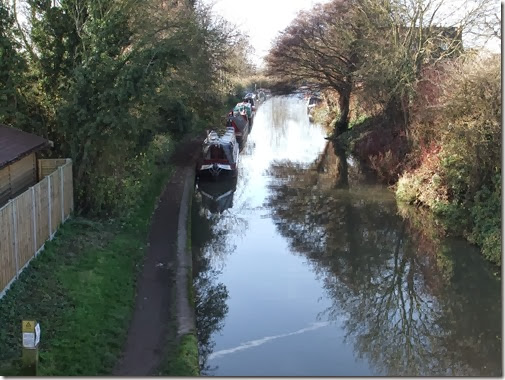 Next week we are back in Wigrams Marina whilst we journey south for a visit!