Ice breaking and more lock practice for me!

After 3 nights at Hawkesbury Junction (and one lunch in the Greyhound!) it was time to move on, so after spending time at the water point I went over to set the lock whilst Gary brought Muleless round. 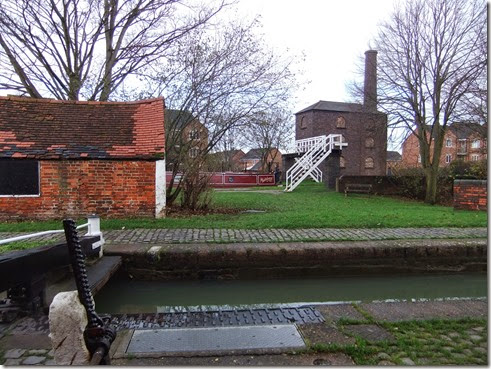 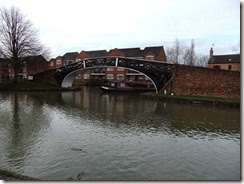 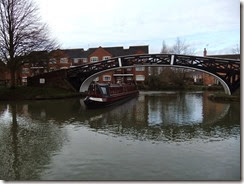 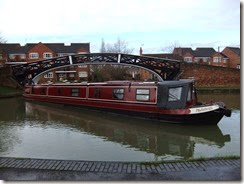 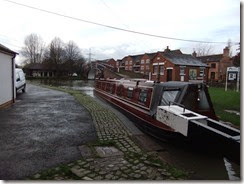 It will be a little while before I am ready to make this manoeuvre! Gary did it perfectly!

It doesnt take long to get through the stop lock – it has a rise/fall of less than a foot! 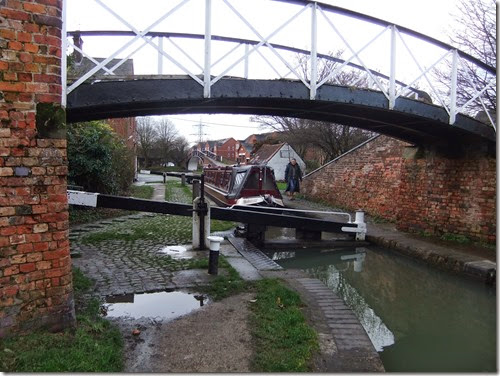 So at 12 O’clock we pulled away and set off on a long trip for us – we wanted to get to All Oaks Wood, normally this would be a 2 day trip for us, but with the possibility of more ice we didnt want to stop at the golf course – it is too exposed there!

So we had to go past the Ansty water point (unheard of!) and our lovely spot by the golf course (it looked so inviting we nearly did stop!) 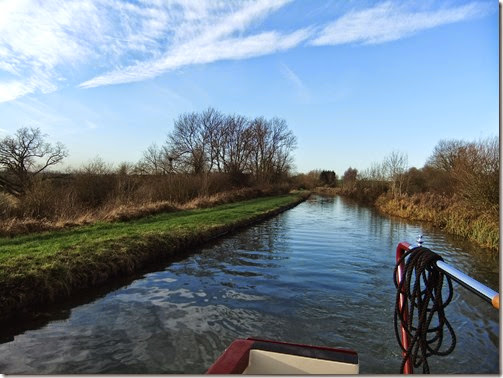 It was a lovely day for a cruise – cold but clear and we enjoyed our longer run.

We went past the water point by Rose Narrowboats (!!!) and through the pesky bridge again! 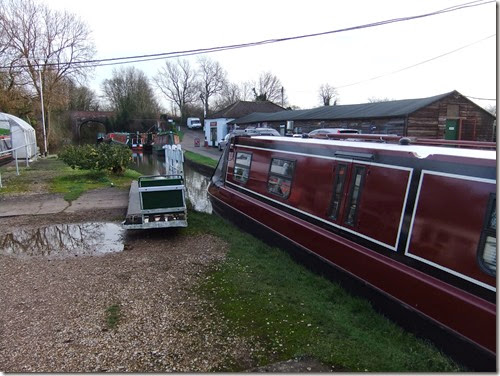 And moored up at All Oaks Wood, where there were 9 boats already moored!

The next morning we discovered heavy frost and lots of ice on the canal! 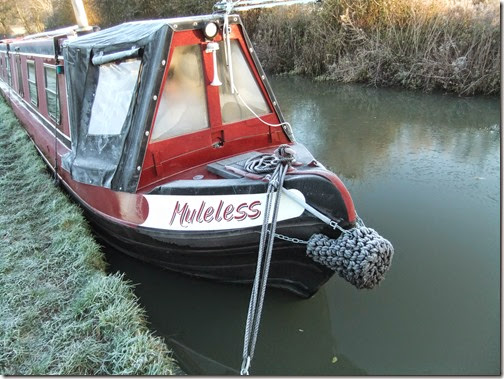 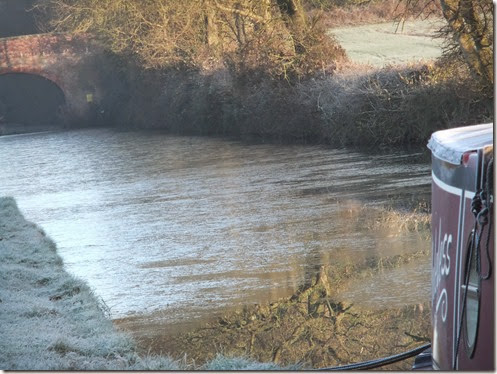 The other boats moored there werent going anywhere, they stayed snug and warm but we were moving on! 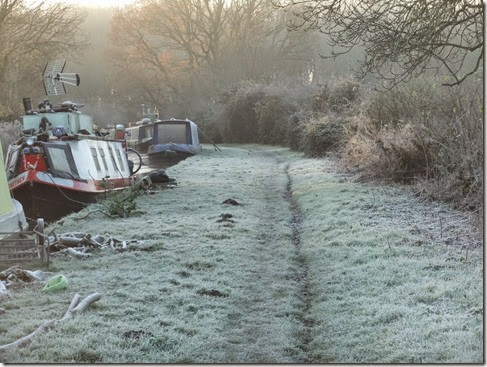 As we were getting ourselves ready to go, a family of swans were making their way down the canal, in single file, with Mum or Dad finding the easiest way through the ice! 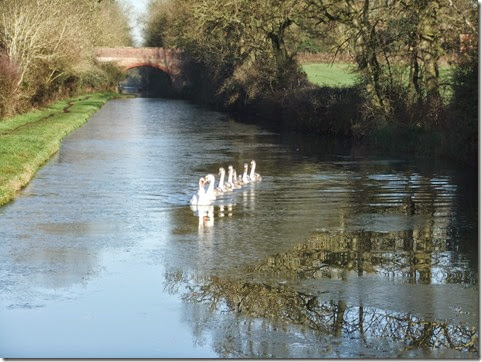 It was then our turn! We pulled away and were soon having to break the ice to move along! 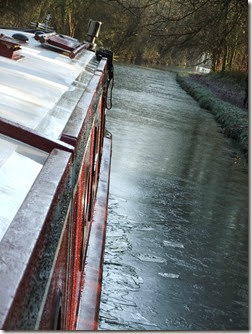 A bit further round the bend we found the family of Swans again – this time they were struggling to move along with the adult at the front of the line having to break the ice to move through! 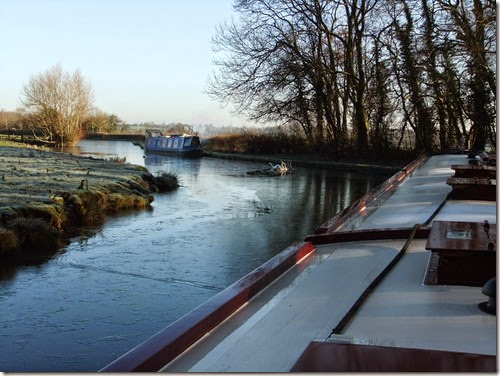 Of course, once we had passed them it was easy going for them again – a nice wide passage through the ice! 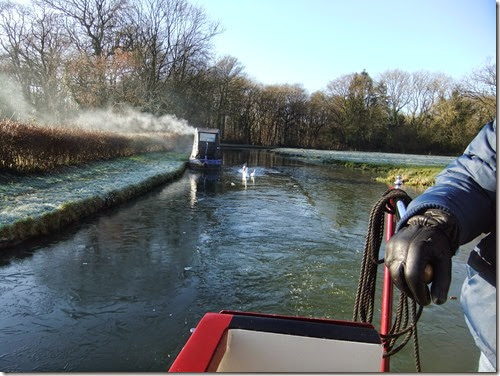 A bit further on – still breaking ice – and we passed Brinklow Marina. 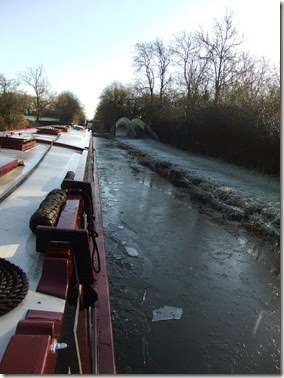 The ice thinned and then ran out, and then we arrived at the Newbold water point and pulled in – we definitely need blacking this year now!! 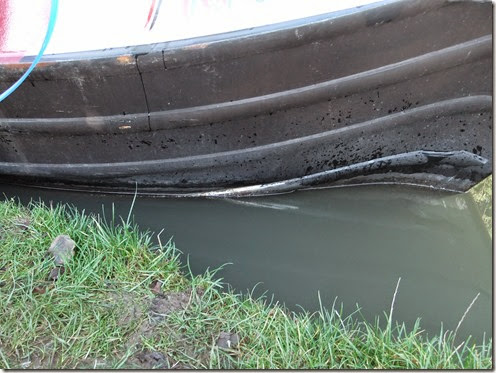 The blacking had been showing signs of wear – but now we had shiny steel showing!!!

Once the water tank was full we moved on again and moored up at Brownsover – where  there was only one boat moored when we arrived and two others joined us a bit later!

After a bit of shopping we are now fully decked out for christmas – festive foliage display, Illuminated star and Christmas Tree! 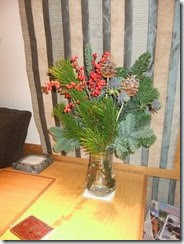 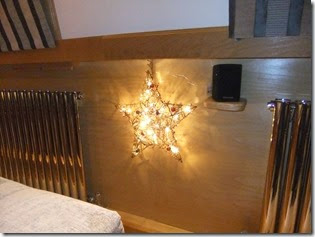 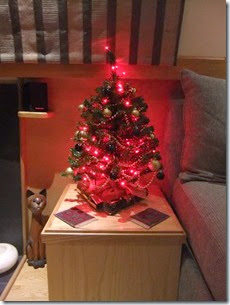 We spent a couple of nights at Brownsover, and when we left it was empty of boats completely! 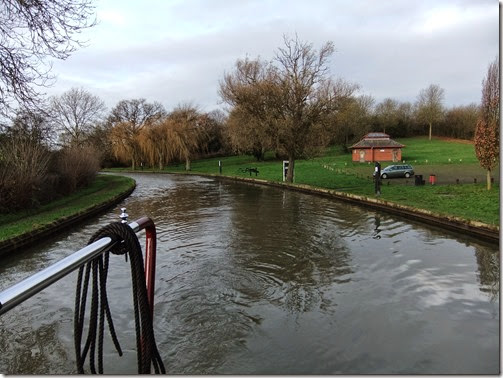 We were moving on to Braunston in one go, again this was a journey we would normally do in 3 days!

We didnt stop at the Hillmorton water point – we would fill up when we reached Braunston, so we headed straight for the locks.

It was my turn again – this time going up!

Gary making sure I didnt hit the side as I went in! 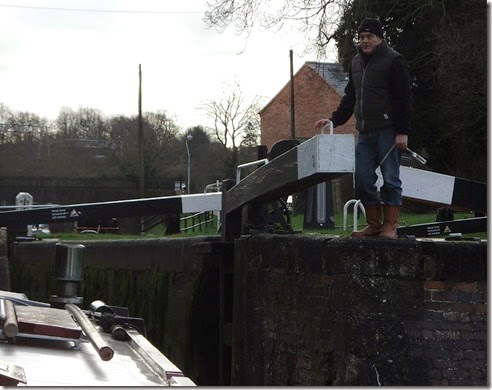 Intense concentration as I peer straight into the sun! 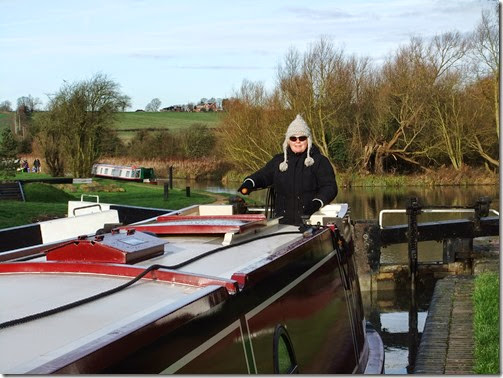 I think I’m getting the hang of it now! 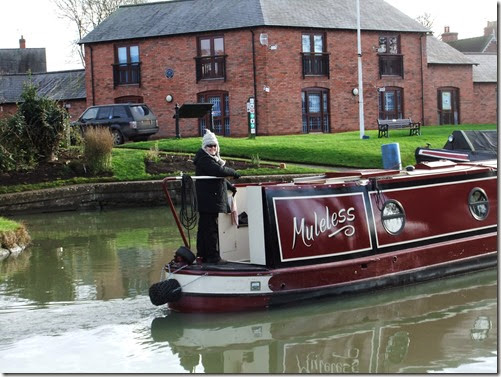 A bit of a tight turn into this one! 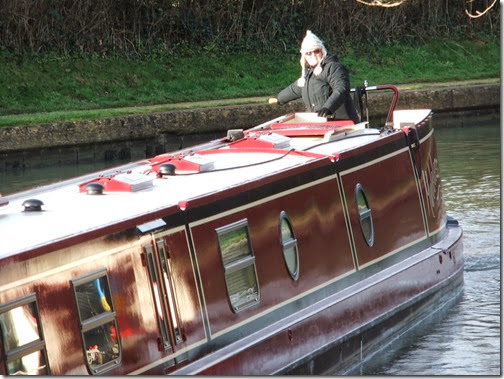 Steady as she goes! 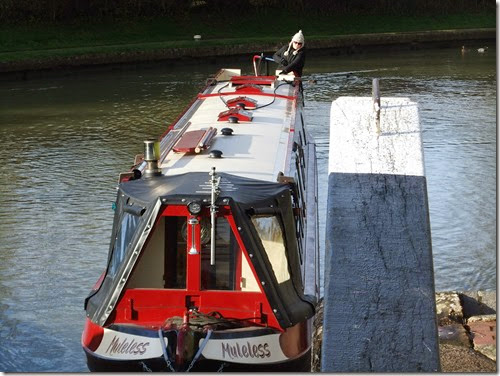 Just one more to go now. 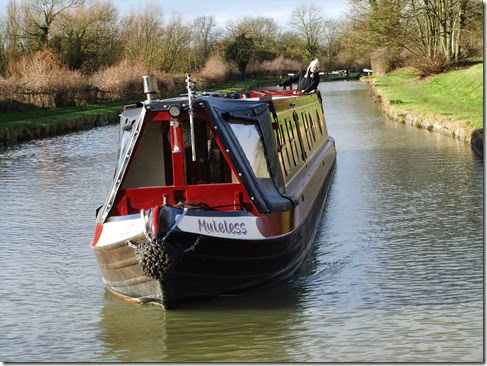 And then it was all over and Gary could breath again!

We plodded on to Braunston, filled with water by the junction, and then moored up opposite the Boathouse Pub – right behind NB Waiouru just as it was starting to get dark!

Once we were sorted out we headed to the pub for dinner with Maffi! A great evening was had, and we were the last to leave the pub!

In the morning we were invited for coffee by Tom and Jan, and later in the afternoon we returned the invite and again demonstrated the posh coffee machine!

Next morning Tom and Jan slipped away earlier than us – have a good christmas guys, see you again soon! 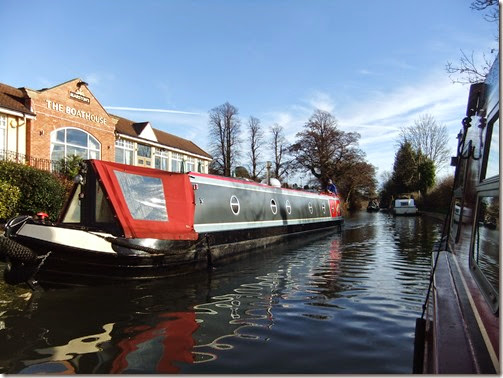 Whilst we filled at the water point, Gary chatted to Maffi whilst waiting for our bacon baguettes from the Gongoozlers Rest Narrowboat Cafe. 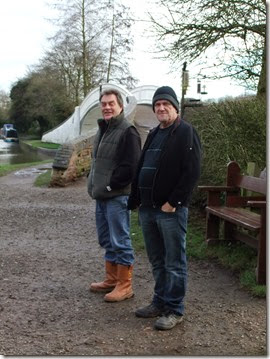 We were soon on our way – have a good christmas Maffi (and Molly) enjoy your cruise now your boat is fixed!!

As we left Braunston we also passed NB Timewarp – have a good christmas guys!

We headed down towards Wigrams Marina and are now safely moored up (despite the strong winds today!)

We are off visiting family and friends for a few days but will be back for christmas on the boat.

So it remains for me to say MERRY CHRISTMAS to all our readers (long suffering!) and hope you will catch up with us again in the New Year!

This year we want to start a tradition of horn blowing at midnight on New Years Eve – just as we have on the south coast with all the sea going vessels. So come on all of you on your boats this New Year – I WANT TO HEAR THOSE HORNS!!!