So there we were, last Thursday, pledging never to do such a long day again – so we did a short hop to Foxton!

It was raining, so we didnt start too early (11.40!) we managed the nearly 5 miles with NO LOCKS, just one short tunnel in 2 hrs 20 mins – unfortunately it rained all the way so no pictures! We moored at the bottom of the flight and settled in for a relaxed evening.

Friday was a better day, only showers forecast, so after filling the water tank we moved across to the bottom of the locks and I went to book in with the lockie.

I had to walk to the top of the flight to find the lockie, and as there was no-one else going up or down we could start up the flight straight away.

Gary was chatting to some gongoozlers, but he soon headed into the lock as soon as I had it ready. 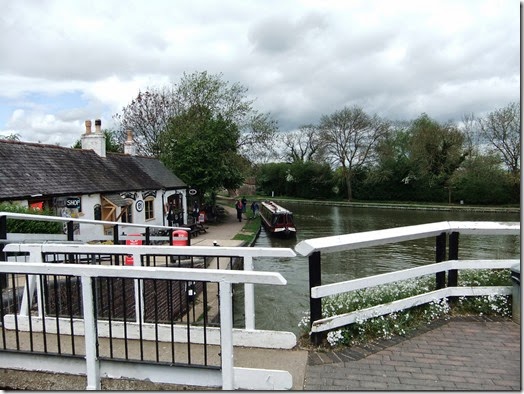 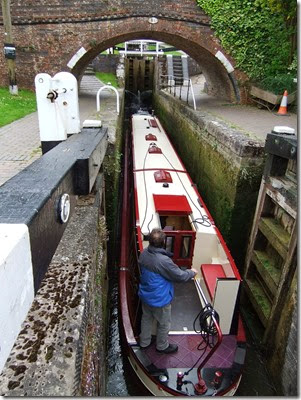 We made our way up the flight, with just a short rainshower that chased away all the gongoozlers! 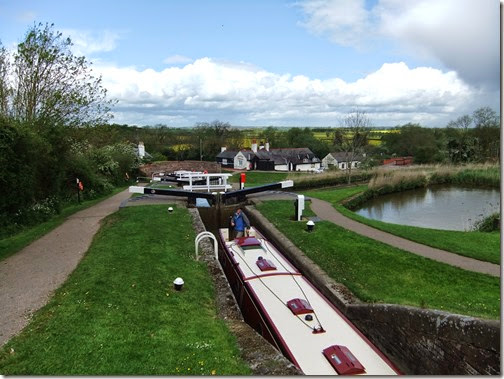 Someone had been allowed to start down the flight, and we were going to pass in the pound between locks 5 and 6 (counting from the bottom!), so we had to wait in lock 5 until they were ready to exit lock 6! 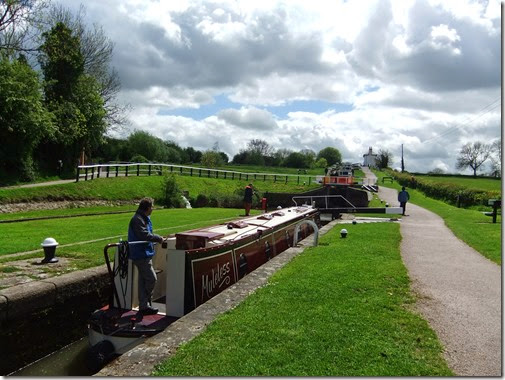 Then we had to move into the pound and tie up to the bollards . . . 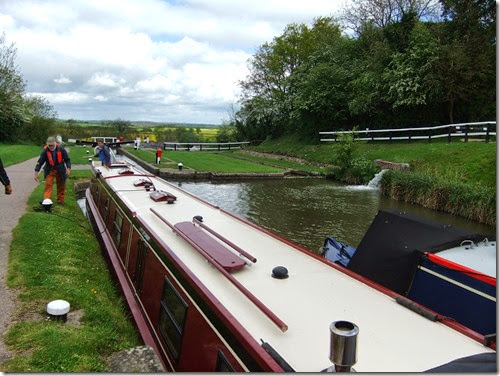 so that they could come straight out of their lock and into the one we had just left! 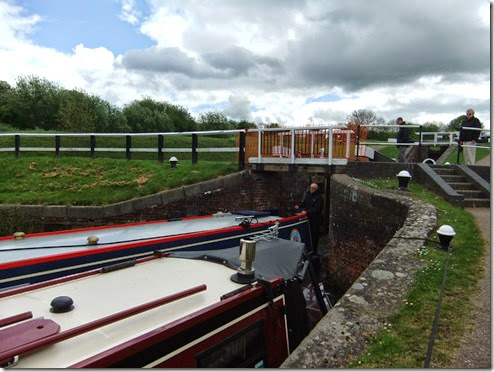 A bit of a tight squeeze!

We then carried on up the flight, ably assisted by our very friendly and cheerful lockie! 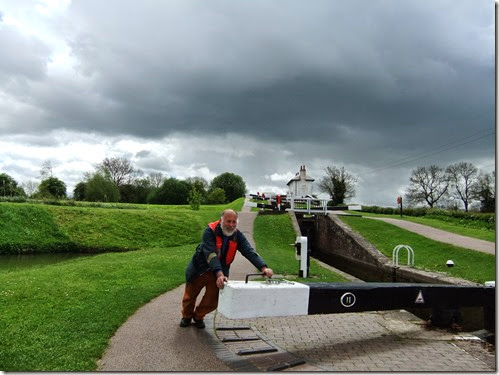 As you can see the sky looked ominous, but we were lucky it didnt rain on us. 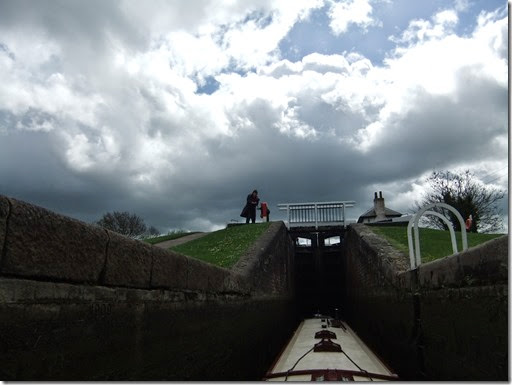 We reached the top in one hour, using electric drive of course, which used just 2% of our power, which we soon put back in!

We found a nice spot to stop for lunch, and then made the steady plod along the top pound.

Gary is now getting to be a real Boater – he is even wearing his boaters hat! 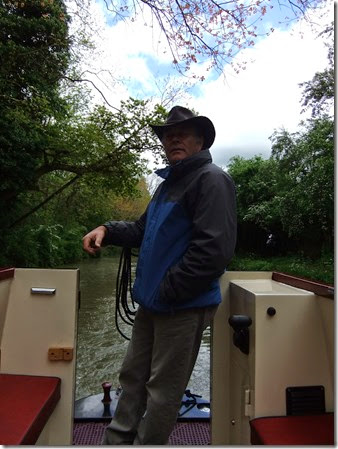 We missed a lot of new born lambs being in Leicester, but there are plenty of boisterous youngsters about now! 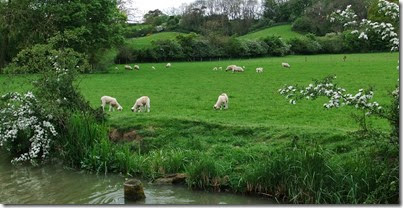 We then spotted the entrance to Husbands Bosworth Tunnel 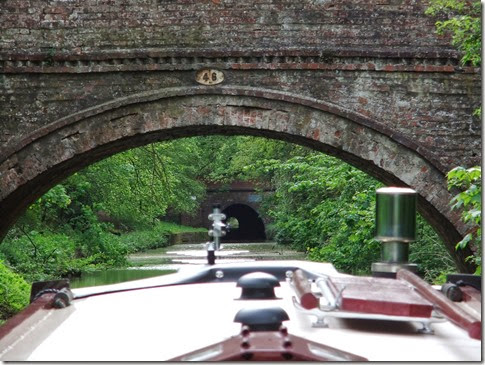 As we planned to go through the tunnel in electric drive, I thought I would try a video, with sound, to give you a taste of the experience!

The link should take you to YouTube! We used just 1.2% of our power, which again we made up very quickly.

Shortly after the tunnel we were at the junction of the Welford Arm and moored up on the rings there where we stopped on the way up. Just 5 hrs and 20 mins, including lunch stop today – we are definitely getting the hang of shorter days!

Saturday was promised to be very showery and blustery, so we decided not to move, and just chilled out. We started off on our own on the moorings, and by mid afternoon there were 5 of us – everyone else decided that they had had enough of the wind by then!

Sunday it was time to move on to Crick. We left at noon, so missed some earlier showers. No locks again today, so a nice easy cruise.

We passed these boats with good names - 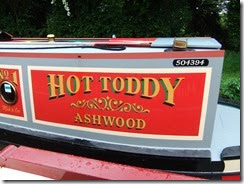 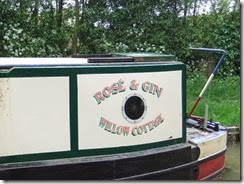 We were being followed by some hire boats, so decided to stop at Yelvertoft Wharf for water and to let them pass – only one of them decided to stop too, causing complete chaos as there is not much room there between the permanent moorers and the bridge!

After the second hire boat had gone through, and finding out that we would be more than half an hour filling with water, they decided to carry on to Crick to fill up there, and as soon as they had left, a share boat pulled in instead.

There is a lovely old building opposite the water point – part of the original wharf I suppose, but now used as a house. 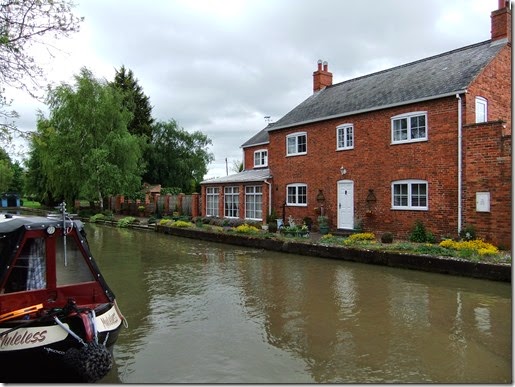 We were soon on our way again, and this time with no-one following. We moored up in Crick at 5pm, so another 5 hour day.

Since we had a late start, we thought we would have a sunday roast in one of the pubs in Crick, so as soon as we were sorted out we walked up and discovered that the Red Lion wasnt open, so went in the Wheatsheaf instead! It was a nice meal, but not really enough potatoes and veg for our taste! A quick stop at the Co-op for essentials on the way back to the boat then a relaxing evening in front of the telly.

Monday we left Crick at 1pm – we seem to be getting later every day!

Almost straight away we were in Crick Tunnel – we were wearing our waterproofs ready for what the day had in store for us, so were armed against the notorious “boat wash” that is the water running from the roof! Again we were on electric drive, so heard the water before we could see it! Crick is definitely the wettest tunnel we have been through so far!

After the tunnel it is about a mile and a half to the top of the Watford lock flight – the second set of “stairs” in the title!

We stopped at the top, a boat was just entering the top lock as we got there, and I went to find the lockie again.

Muleless waiting at the top, with the M1 just behind us. 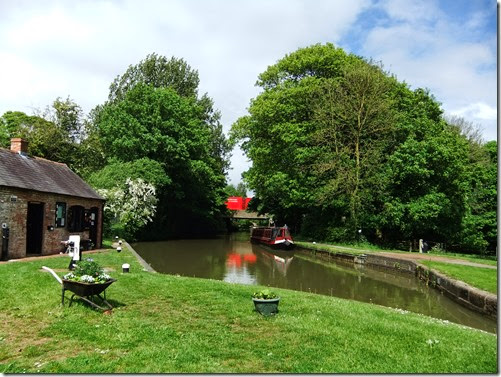 We had to wait at the top for a while, as there was a boat at the bottom waiting to come up, after 6 boats had gone down.

We took the time to have lunch and then got ready for the descent.

Having got us going the lockie left us to it and we made steady progress down the flight.

Steerers eye view from second lock looking back up. 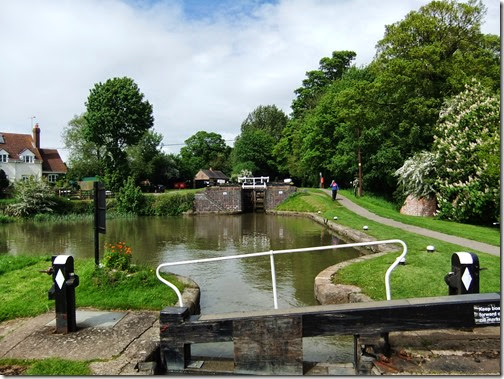 Yours truly hard at work, still wearing the raincoat which did at least keep the rain at bay! 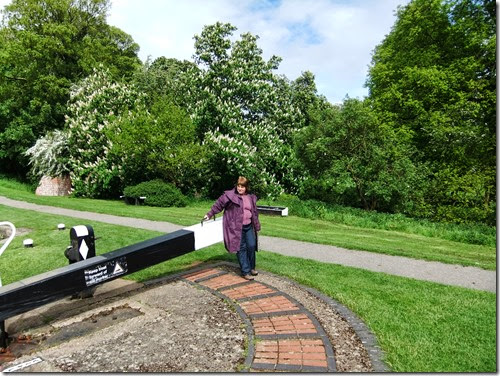 Watford locks are in a beautiful setting. If it wasnt for the noise from the motorway you would think you were miles from civilisation! 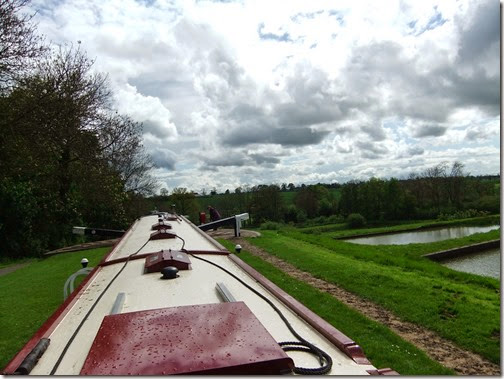 Steerers eye view from inside the “staircase” 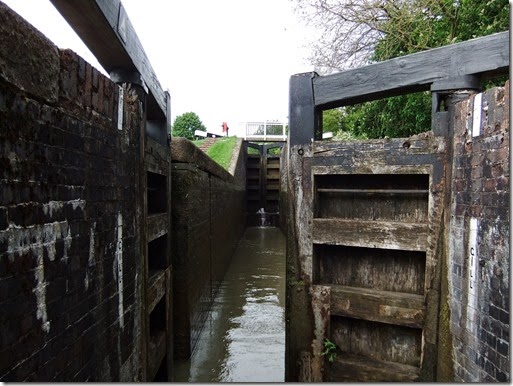 We were soon down the “stairs” and passing a boat waiting in the next pound, and then heading down the last two locks.

Another gentle one and half miles brought us to Norton Junction, and we moored up in the sun after just 3 and 3/4 hours (including lunch!).

We have definitely gotten back to easy cruising!