We have had a busy week so far on the Ashby Canal, so it will take a couple of blogs to catch up!

Last Tuesday we left our mooring at Hawksbury Junction by the electric pylons where we had spent the wet Bank Holiday Monday. 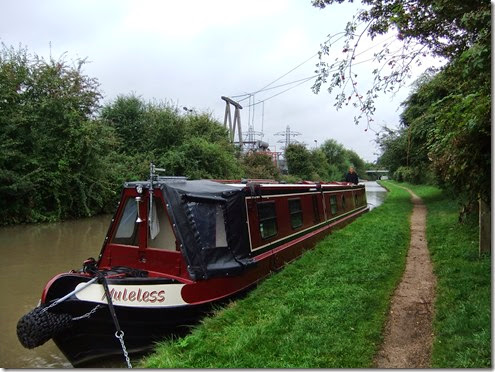 We headed through the stop lock and through the junction and turned left onto the Coventry Canal – and stopped by the water point. We had chosen this tap out of all those on offer at the junction so we would be nearest to the Elsan disposal to do a self pump out using our special “loo tub”. Whilst the water tank was filling, I pumped and Gary carried the tub to the Elsan to empty. Everything went according to plan up to this point! 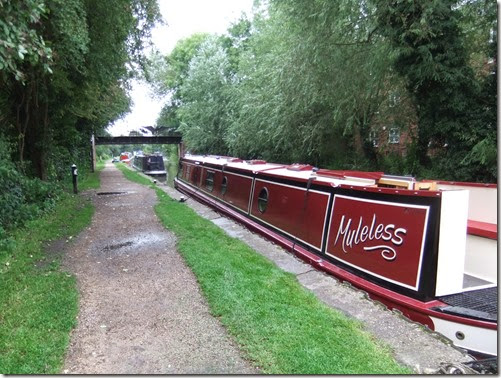 We havent been down into Coventry yet – that will be another time. With everything packed away, I moved back onto the junction bridge ready to take pictures as Gary reversed back to the junction – but it wasnt to be – he was stuck in the middle of the canal with no propulsion – and I had to pull him back over with the rope!

Some time later Gary had managed to pull this fleece blanket off the prop (he had to cut it as he pulled it out). 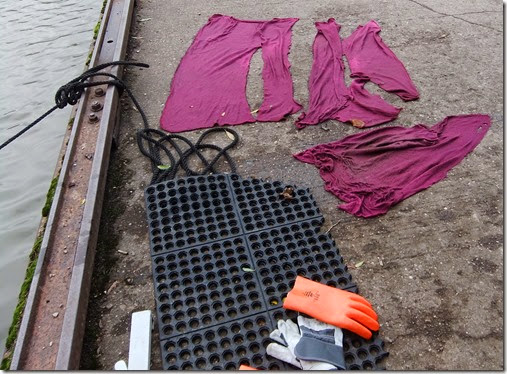 So eventually, 3 hours after pulling pins, we were ready to leave Hawkesbury Junction! Gary reversed back beautifully, and turned at the junction - 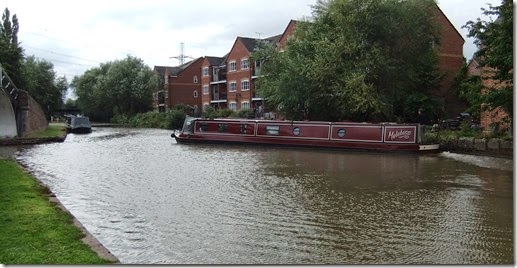 and then picked me up as he passed through the narrows! 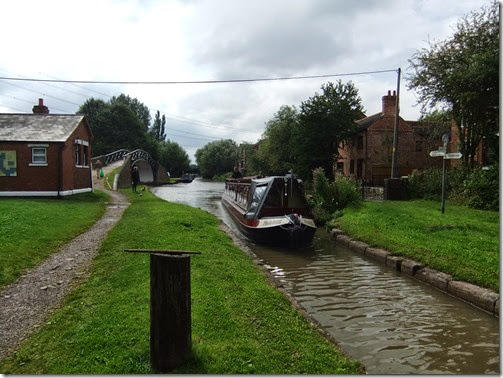 It didnt take too long to do the 2 1/2 miles to Marston Junction where Gary made the awkward right turn onto the Ashby Canal. 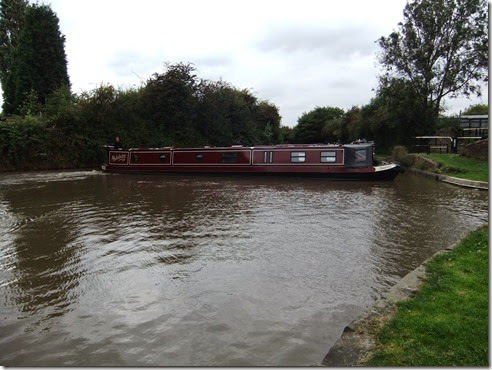 I had read on other blogs about the dredging taking place, and straight away we passed the dredger hard at work. 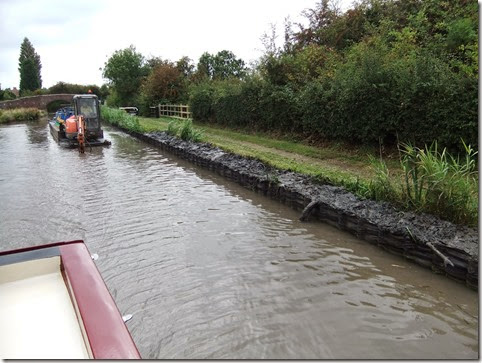 The Ashby Canal is fairly shallow, so we gently plodded along, sliding along the silt and being battered by the wind.

We passed some moored boats between bridge 3 and the railway, and decided to moor up – bad idea!

We couldnt get close to the towpath, and just as we decided to continue on, the CRT workboat with the dredger on went past!

We followed him along slowly to bridge 5, when he started to billow smoke and started to use the dredger bucket to pull himself in to the moorings behind another CRT workboat!

At the other end of the moorings, near the bridge, we could see an Ashby Hire Boat breasted up – causing a bit of an obstruction! What now, we thought!

We couldnt get close to the side, so couldnt get off the boat to investigate – luckily a nice young lady from the Ashby Hire Boat Company ran up to explain what was happening with their boats – some hirers were transferring to a new boat as their original had engine problems, she apologised for the delay, and we asked her if she could find out what was happening with the CRT workboat!

It turned out that the workboat engine had caught fire! Hence the bucket being used to propel the craft! The boat was being tied to the other CRT boat moored up, so it was safe to move past him, which we did, just so that we could tie up temporarily to another moored boat (NB Woolley) whilst the hire boat was sorted out.

Whilst Gary chatted to the crew of NB Woolley, I was going to check beyond the bridge for moorings. I only got as far as the hire boat and started chatting to the Hire Company staff. The holiday makers were transferred to their new boat and went on their way. The Mechanic/Engineer was checking out the engine to see if they could get the boat back to their base, and I was told of the really nice moorings at Hospital Curve! The poorly hire boat started up and the staff moved it off to return it to the hire base – having to go down to Marsden Junction to turn round first!

Although there was mooring now free at bridge 5, we decided to carry on to the nice moorings at Hospital Curve. We finally moored up 6 1/2 hours after pulling pins and just 5 miles travelled!

Wednesday we set off at 11 am, and as we went through bridge 9 there was a sign telling us about the Ashby Canal. A bit strange that it wasnt right at the beginning! 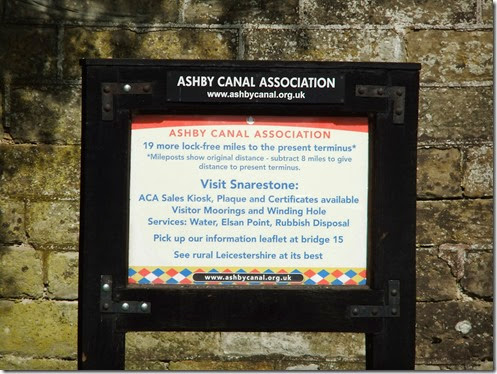 It was a lovely sunny day and as we cruised along we were accompanied by two mowers (and following behind somewhere the strimmer man!). 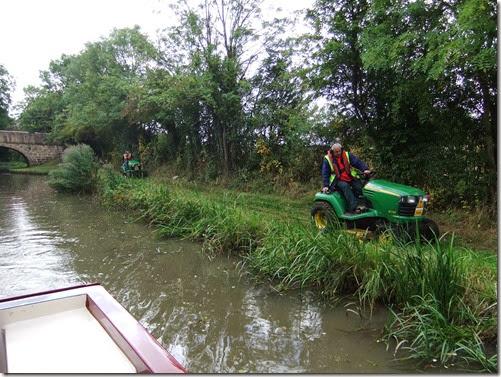 At bridge 15 we pulled in for water and to collect the information leaflet, and saw this sign! 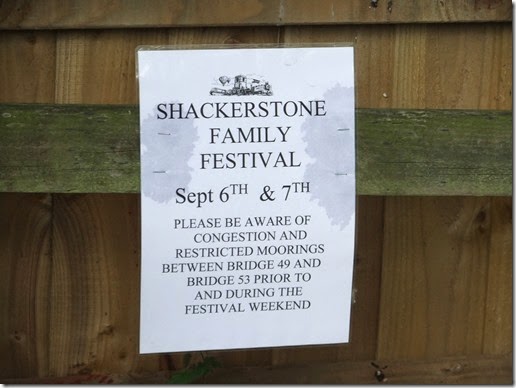 We had been forewarned of problems along the Ashby when reading NB Freespirits blog but had decided to “do our bit” to keep the canals open. The official CRT notice is:

Between 29th August and 14th September all visitor moorings and casual moorings (14 days) will be temporarily suspended with mooring only allowed along particular sections identified for the Festival.  Therefore all boaters intending to travel and moor to attend this festival need to arrange a mooring with the mooring organisers, Ashby Canal Association.  Contacts details below.

Towpath moorings for the event are available and will be signed between Bridges 46 - 53. Specific mooring locations have been identified to accommodate the anticipated number of boats booking in for the event with the event organises.

The Trust apologies for the timing of this notice, but this is due to a recent agreement with Natural England to help protect the canal environment within the Site of Special Scientific Interest from Bridge 46 to Snarestone.

So having filled our water tank, we moved on – passing the point that we reached in a hire boat – and ON TO NEW TERRITORY! 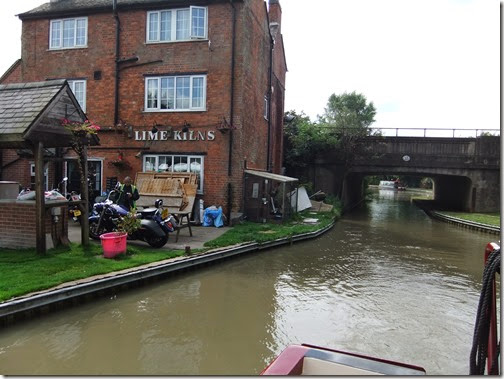 Just a little bit further, we started to pass through the outskirts of Hinckley, and we made a mental note of the mooring spots to be able to access the shops on our return visit. We also passed the Trinity Marina – no photos though, I’ll take them on the way back!

We thought we might be able to moor up just after Hinckley – but it was a couple of miles further, by the Farm Shop at Bridge 23 that we eventually found a spot.

After sorting ourselves out, we popped in to the Farm Shop to see what they sold. It may be small, but they have some lovely looking meat, pies and veg and milk too, so we will probably need to visit them on the way back!

We then walked up to Stoke Golding – and despite finding all three pubs couldnt have a drink – as non of them opened until 5.30/6pm! Never mind – we enjoyed the walk and had a drink on the boat!

On Thursday morning, Gary had just popped into the Farm Shop to get some milk and a Pork and Caramelised Onion Pie, when a familiar boat came under the bridge!

We had been watching out for NB Oakapple, as we knew they were still on the Ashby. They were soon (almost) squeezed in to the mooring behind us, and we were then having a great catch up with Richard and Sharon over coffee! 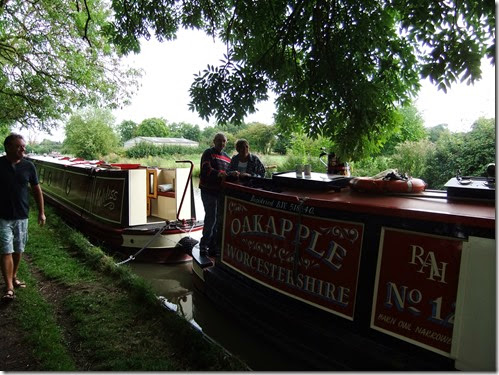 We couldnt stop for too long, as we both had to move on. I am hoping Sharon will help me organise “narrowboat horn blowing” to celebrate New Year (as the boats down south do every year).

We moved on, and soon passed the Ashby Hire Boat Base 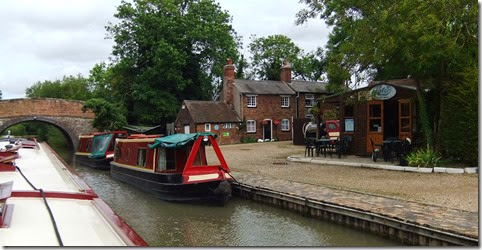 and the Ashby Canal Centre Marina (a really posh entrance!) 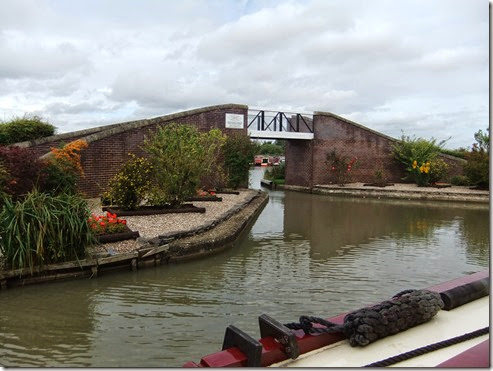 It wasnt far to Sutton Cheney Wharf, where we filled the water tank and emptied the rubbish, and then we were looking for somewhere to moor up near to Shenton Station for the Battlefield Line Steam Train!

We moored up just before the Shenton Aquaduct, as a heavy rain shower hit, so we had lunch and then walked along to see if there was a mooring not under trees!

We found a nice spot a short way further on and went back to get the boat. After re-mooring, we continued on our walk – to find the station!

First stop was at the bottom of the Aquaduct! 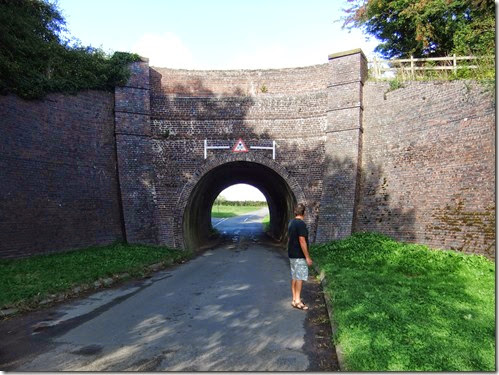 Its strange to think about all that water going over the road!

We were soon at the station – but the trains had finished running until the weekend, so it was safe to stand on the track! 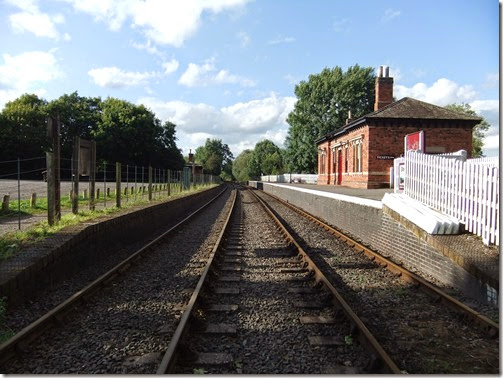 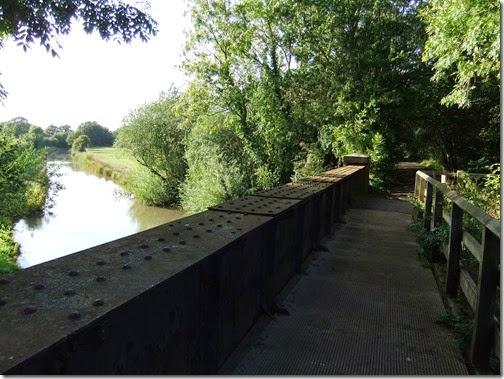 Clearly, there is much to see and do around the Ashby Canal!