Some essential maintenance and heading for new pastures!

OK, so its two weeks again since last blog, and we have to admit to doing even less than usual!

The reason being that we had to order a part for our toilet and wait for it to arrive, so in the meantime we pottered around between Napton and Braunston, just moving enough to charge the batteries and fill the water tank.

At Napton I tried to photograph the “super moon” but neither I, nor my camera were really up to the job – this is the best of my bad shots! 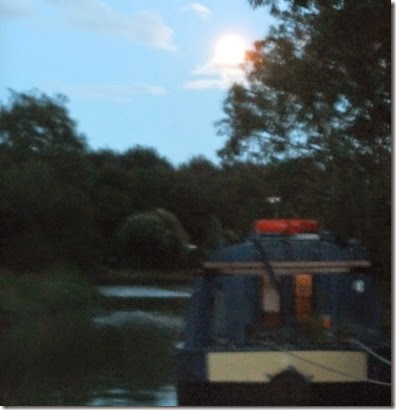 We were passed by President and Kildare on their way somewhere! 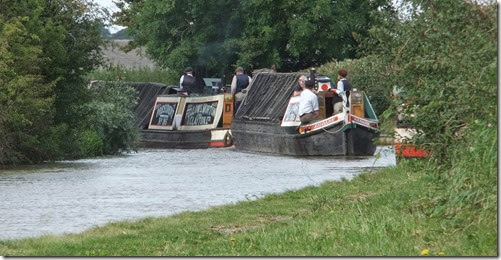 The cygnets have grown quite a bit since we last saw them! 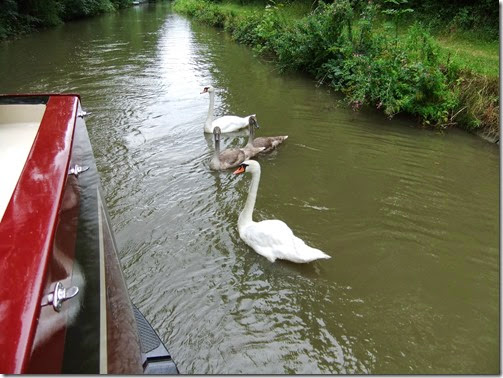 We managed to have another chat with Lesley and Joe on NB Yarwood. Whilst Joe chatted to Gary, Lesley showed me the inside improvements on Yarwood – and again I forgot to take a photo! We left them with their new settee being delivered so didnt say goodbye properly. Hope to catch up again sometime – enjoy the rivers guys!

The engine was in need of its 500 hr service, so when our toilet part arrived we bought some oil and Gary did that too.

On the day Gary fitted our new “non return valve” on the toilet, I read on Chance’s blog that James had just done the exact same thing!

So on 20th August with all the maintenance sorted it was time to head off to new pastures! We have decided to head up the Ashby canal – we had only previous visited it on a hire boat – and that was only a short stretch at the bottom end.

First of course we had to head up the North Oxford Canal again. We stopped off at Brownsover to top up the cupboards and nipped into the cinema to see “Expendables 3” which we enjoyed!

We were passed by “Nutfield” and “Raymond”, also on their way somewhere! 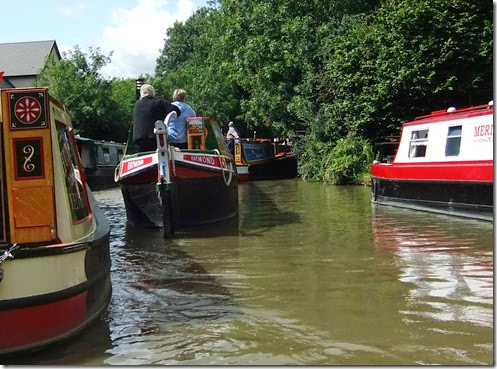 At our next mooring, by All Oaks Wood, we were passed by Doug and James’s old boat Spirit! (For a minute we thought it was them!)

The next day we squeezed passed Rose Narrowboats base and stopped on the waterpoint just as the heavens opened so managed to keep dry inside whilst the tank filled. 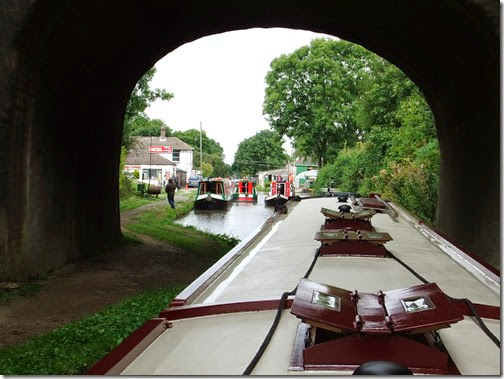 The last time we were this far up the Oxford Canal was the beginning of January, and past this point it was early October last year!

We were soon passing the narrow patch under the M6 – still African Queen country! 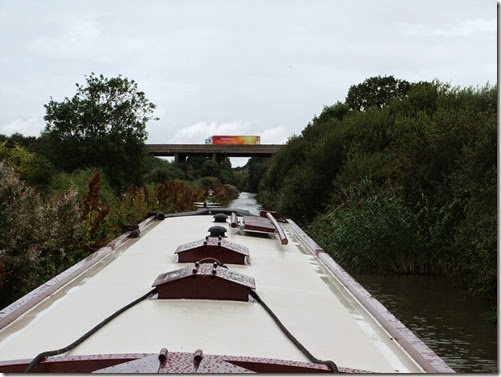 We moored up just a bit further on – had lunch and waited for yet more rain showers to pass and then went for a walk.

We had passed under this bridge and thought we would like to look down from it! 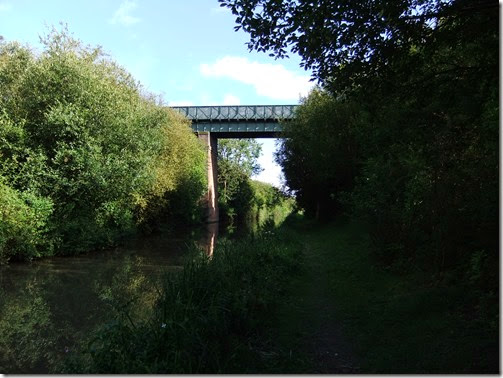 Looking back the way we came we could see the M6 and the canal and railway too! 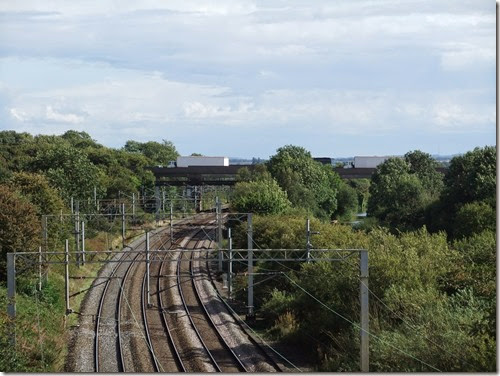 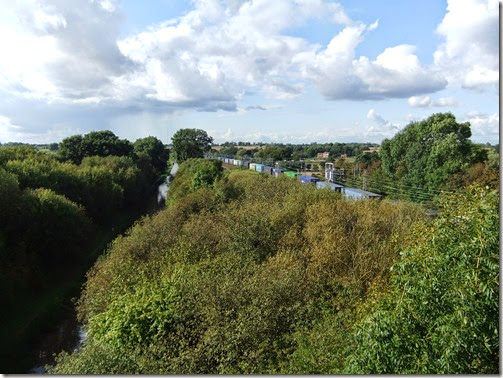 Looking straight down! A view of a narrowboat you dont normally get! 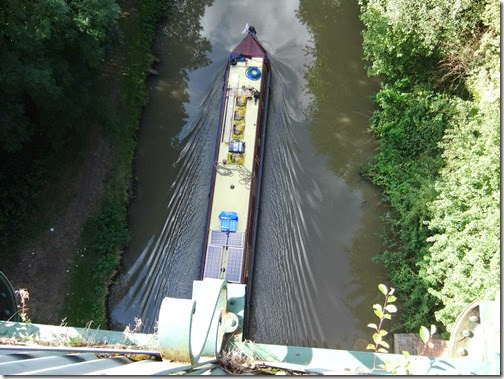 The next morning before I was dressed, this famous boat passed by with its new owners. 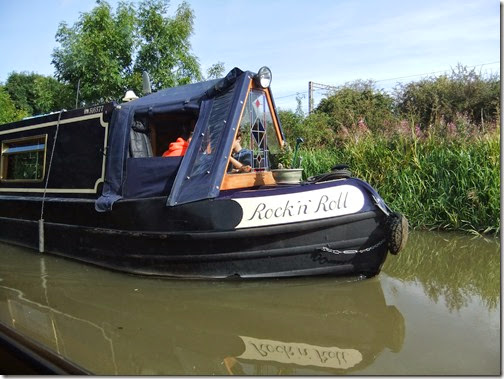 George and Carol helped us out with some information about diesel stoves during our build and when we first set off – now they are enjoying life on their new Wide Beam Still Rockin! Hopefully we will meet up with them sometime when we get down their way!

Our first stop was at the water point at Ansty – where the locals kept us amused whilst we filled the tank! 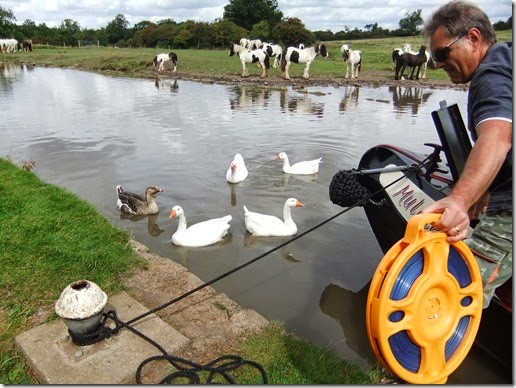 This one wanted to lend a hand! 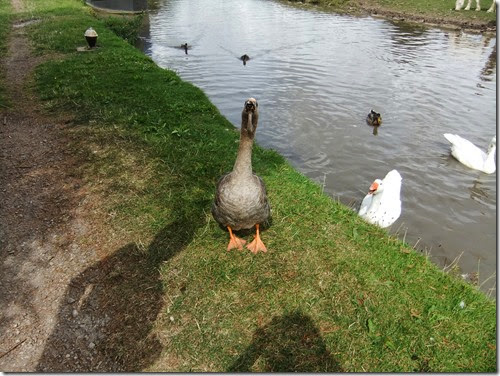 Perhaps I could persuade this little one to join the crew – but then we wouldnt be “Muleless”! 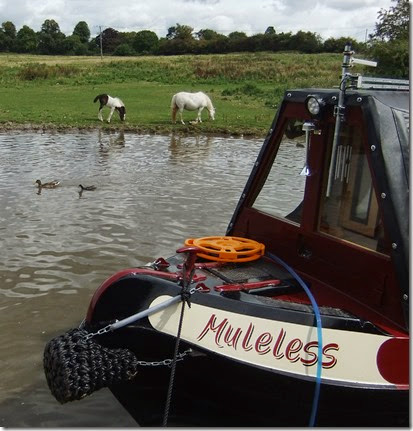 These chaps were obviously into “water sports”! 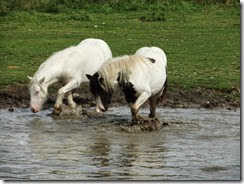 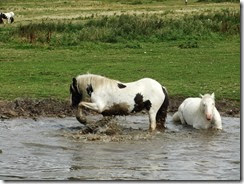 and after all that frolicking, a good roll around was needed! 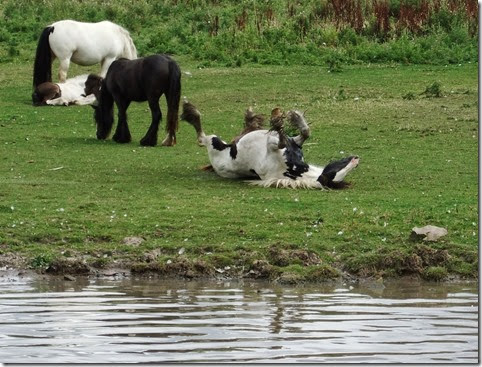 It was a shame to leave the field of very happy horses, but we had to move on!

It wasnt too far to our destination of Hawkesbury Junction where after passing the flotilla of swans, cygnets and a canada goose (was he an “ugly duckling”?) we moored up by the electricity sub-station. 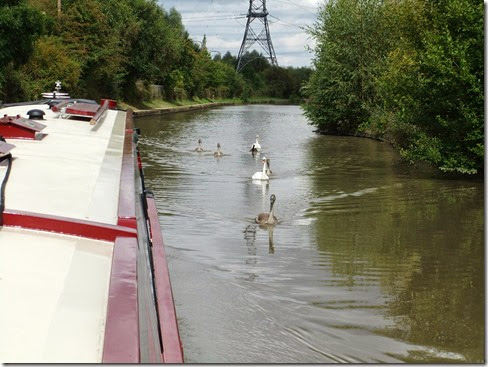 We wanted to wait out the rain on Monday so opted to moor just before the junction so we could top up the water and do a self pump out before heading up the Coventry Canal and onto the Ashby on Tuesday.

After a quick lunch, we walked round the bend to the junction, checked out the position of the services and walked up the Coventry Canal a bit.

Later on we headed back to the Greyhound for a proper “Sunday Lunch” and very nice it was too!

Today being a traditional bank holiday Monday it is raining hard, so time at last to catch up on the blog whilst we watch the boats going by in the rain!