Leaving the Ashby Canal and heading to Coventry

I have so much to catch up, I am going to try to keep this brief!

The day after our train ride to the Shackerstone Festival we visited the Battlefield Site. The sun was out and it was a fabulous day. We passed the sundial and checked out the museum shop and cafe – but didnt go in. 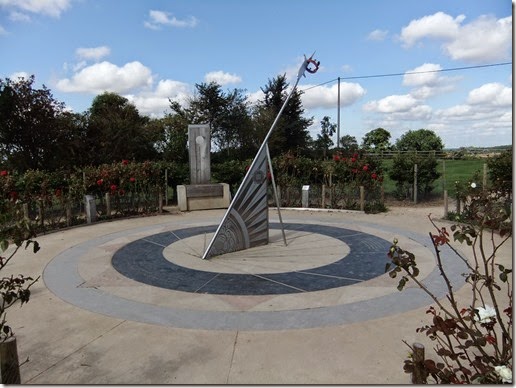 Here we were passed by a flurry of working boats on their way back from the festival – good job we went on Saturday to see them all!

There was a bit of tricky manoeuvring on the big bend past the battlefield moorings, as a moored boat, and a boat coming from under the bridge made it a tight squeeze when towing laden working boats! 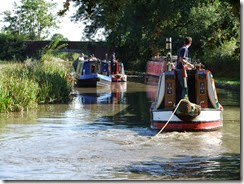 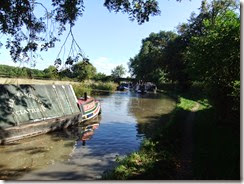 The next day we headed back to Market Bosworth, where, whilst filling with water, fuel boat Auriga squeezed in between us and the bridge so they could go shopping – as the actual mooring spots were not deep enough and he couldnt get any closer than 4 ft! 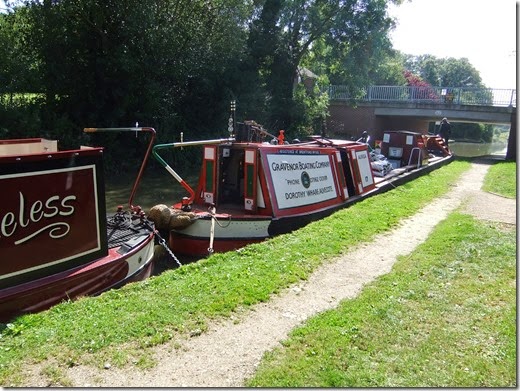 We then moored up and waited for Mark on Callisto to stop by to fill us with diesel. 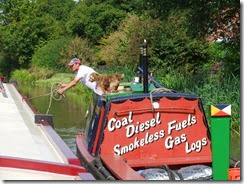 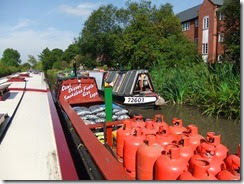 Good job there was still room to pass!

The next day started with the now customary reverse back to the water point – this time ably assisted by the neighbours! 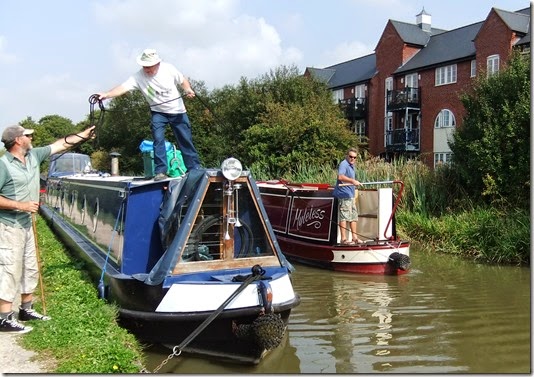 We then set off again to the top of the Ashby Canal, as we had been told that the new bit was being filled with water!!!!!

After a pleasant journey in lovely weather again we passed through Shackerstone and along some very pleasant stretches of canal. 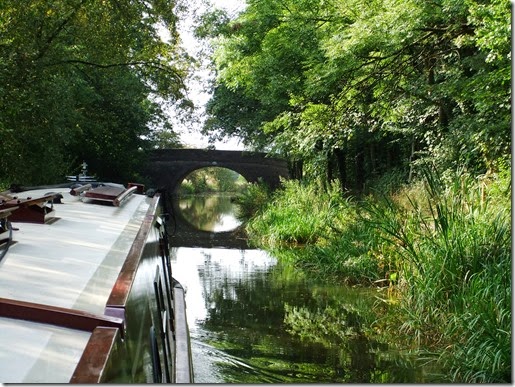 When we arrived at the top of the canal, we asked nicely, and were allowed to reverse through the swing bridge and moor on our own private bit of the canal in the sun! 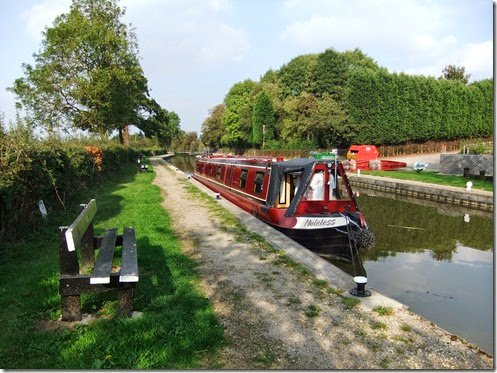 We wandered up to see how the new bit was coming along, and got chatting to the site manager, who kindly let us through the fence to see the progress! 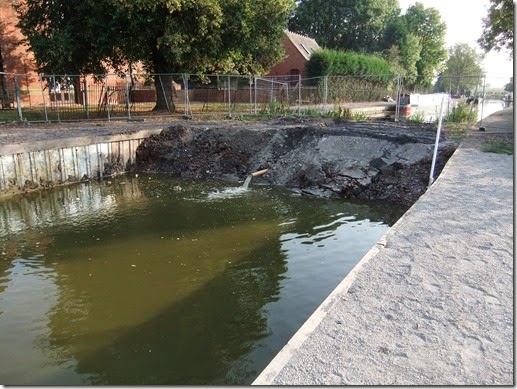 We were amazed to see how much water was already in it! That is a 4 inch pipe bringing water through the “bung” from the rest of the canal - it is not being pumped!

Apparently the level was rising at 8 inches a day! 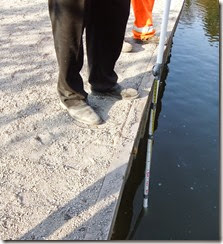 This pipe has a tape measure attached and is clearly marked with the depth. 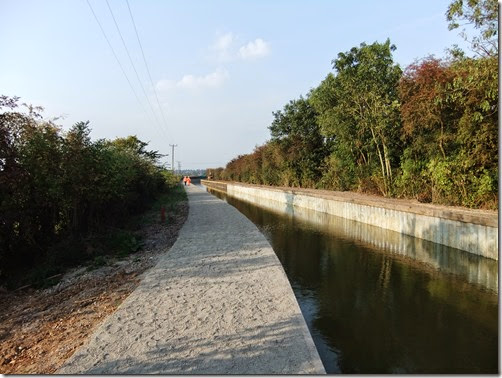 They left us to marvel at the sight of the canal in water!

The next day, this strange craft arrived to be put into the canal down the slipway, and Gary went to give a hand with the canopy! 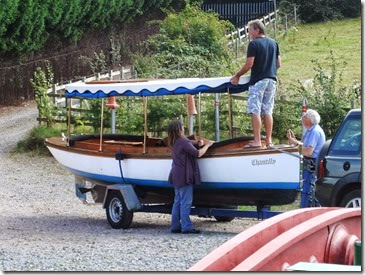 All became clear when they eventually “steamed” past us on their way to Coventry for the weekend! 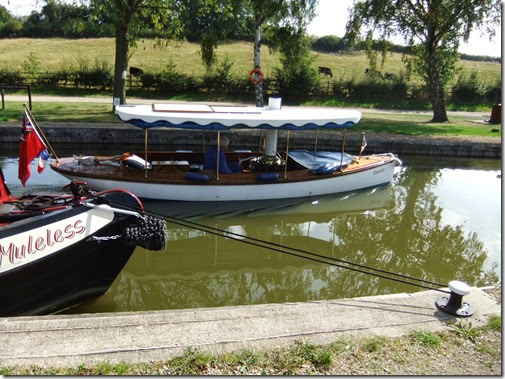 We checked the water level in the new bit – and were amazed to see how high it was! 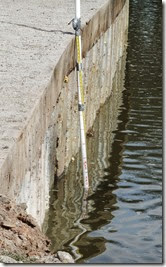 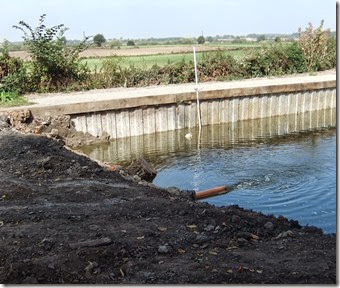 We had intended to walk into Measham – but as it was hot we ended up just going for a drink in the Globe, where we were joined by the crew of NB Alouise, who we invited back to Muleless for drinks later – sorry guys its been so long I have forgotten your names – will look out for you near Blisworth!

Before we left the next day we checked out the levels again – not far to go now! 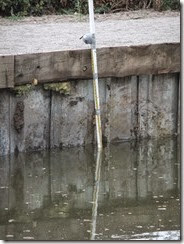 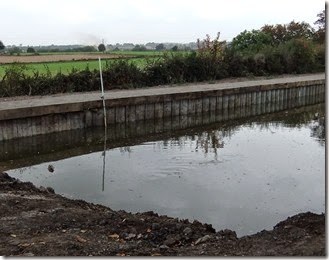 Once the water is level with the main canal the pipe will be “turned off” and the water level monitored for a few weeks to make sure there are no leaks and then the clay “bung” will be removed and the new stretch will be open to boats! Keep a look out for information – I imagine they will have a “grand opening” event!

We now had the chance to moor and look round Shackerstone itself, so we started with a nice meal in the Rising Sun, where we got chatting to the crew of NB Seventh Heaven, who have just moved to Bosworth Marina.

The next day we tried to look round Shackerstone Station again, but unfortunately for us there was a “Fireman Sam” event on and no platform tickets were being issued. Instead we walked down the towpath to Congerstone for a drink, and found NB Seventh Heaven having a spruce up. 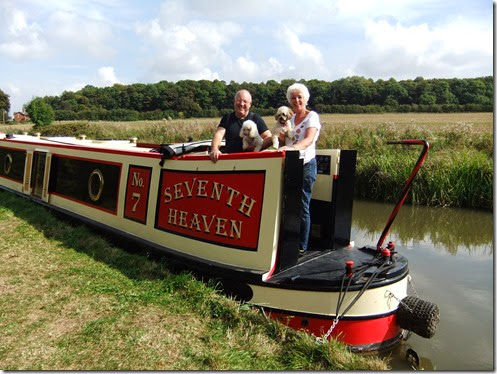 Pam and Pete with dogs Poppy and Annie.

We were now on a new mission – we needed to equalise our batteries – we hadnt been on mains electric since 14 July in Cropredy Marina, and to keep our batteries at their best performance they need to be trickle charged back up to 100% every couple of months.

We had booked ourselves into Trinity Marina for 16/17 Sept and after stopping off at Bridge 23 Farm Shop again to stock up on their goodies (including sausages this time!) we made our way down to Hinckley and into the marina. 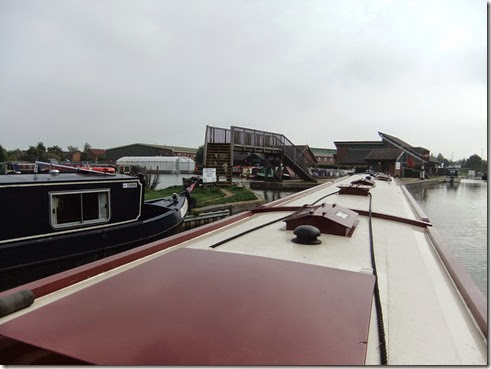 The visitor moorings are directly opposite the entrance – amongst the sale boats!

We were soon settled on our (short) pontoon and plugged in to the electric. 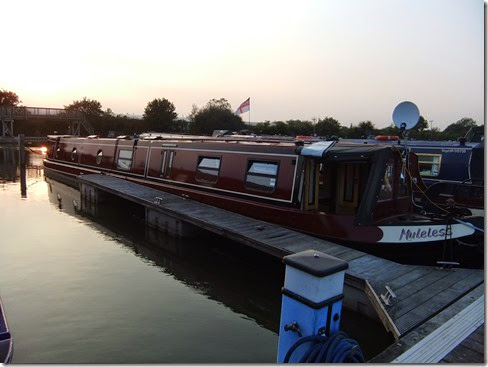 We treated ourselves to an Indian Takeaway from the Simla Restaurant just across from the marina – we thoroughly enjoyed it, next time we might “eat in” instead.

The next day we made our way to Tesco for a top up shop – and got a taxi back with all our goodies! 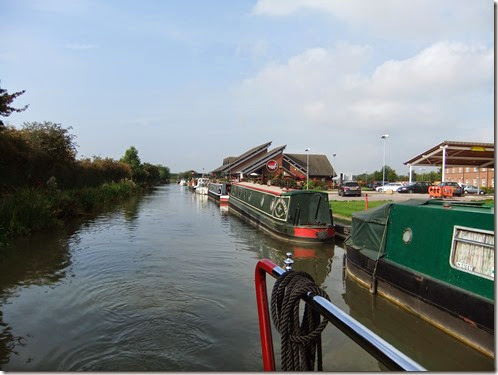 We left in the afternoon and moored up just a short way down the canal by the Lime Kilns pub – our last night on the Ashby!

I didnt sleep too well – too much traffic passing on the A5 and the cockerel at the pub helping out too! 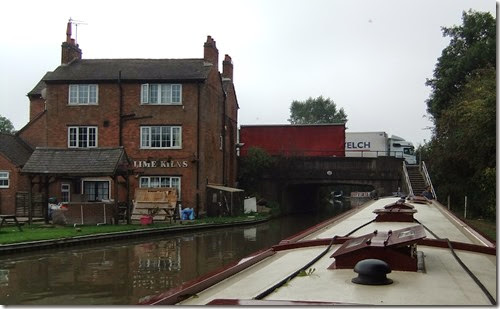 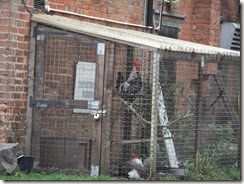 Good job it was only one night! After filling with water, we moved off and after just over 3 weeks finally left the Ashby Canal (all 22 miles of it!) through the old stop lock and turned left, heading to Hawkesbury Junction and Coventry! 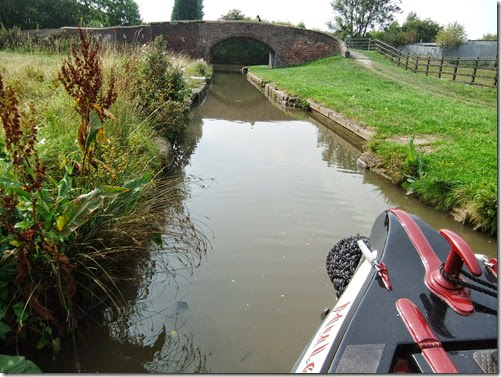