Time to bring the blog up-to-date!

After our great evening with Richard and Sharon from NB Oakapple we had a late start the next day! 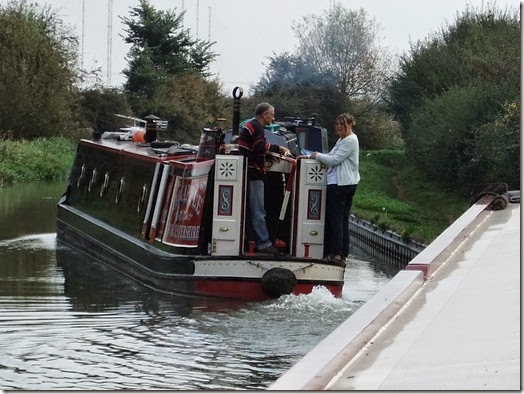 We soon followed them, but only to the water point (!) and after filling the tank we turned the boat round and headed back to Brownsover.

Our plan was to visit the cinema in the afternoon and the next morning do some shopping in Tescos, before turning round again and heading back towards Braunston (the plan that we put on hold when meeting Oakapple).

When passing through Brownsover the previous day there had been lots of mooring space – but this time it was quite busy – but we did manage to moor on the 24hr spaces under the willow tree! (Its that time of year when the roof fills with leaves!) 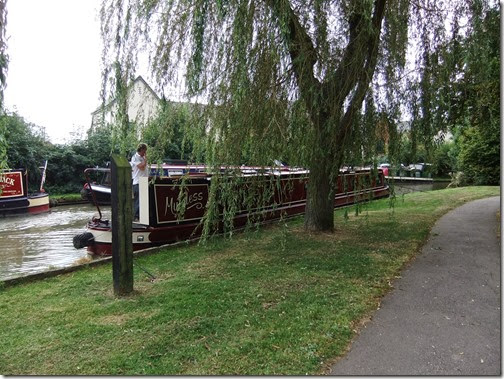 After all our needs were fulfilled, we set off to turn round – stopping of course to top up the water tank first! This is the first time we have used the tap at Brownsover, as the bank is difficult to get close to, and the towpath is very low and waterlogged near the edge.

I left the boat as we went under the bridge, but when Gary jumped off he nearly sank in the mud! 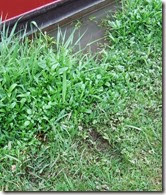 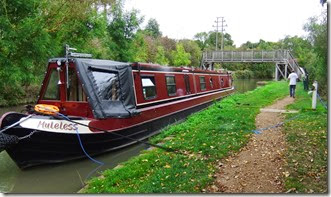 Whilst filling with water, we watched the dredger taking “dredgings” out of the workboat and dumping them on the “offside”.

As you can see there wasnt much room to pass!

By the time we were ready to move the first workboat had been emptied and another had been brought up. We waited whilst the boats were sorted out and then when instructed moved past – it was a bit tight, especially when passing the now empty boat at the front of the little tug boat which drifted towards us as we passed! 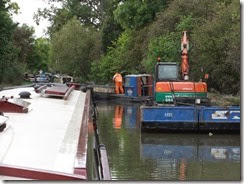 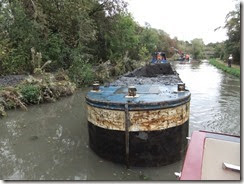 It was just a short journey to the turning point, and as we turned we saw all the hire boats lined up that had been moved out from the Rugby Arm to make way for the dredging, a bit of a tight squeeze that way! 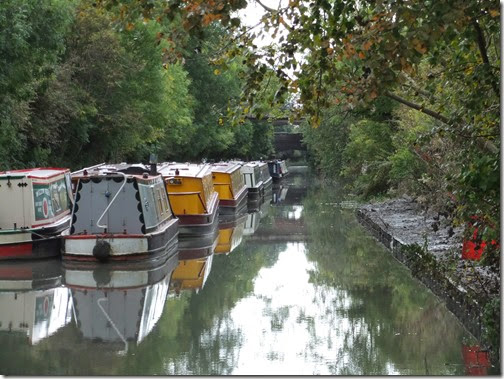 As we turned, I spotted this sculpture on the offside bank – does anyway know anything about it? 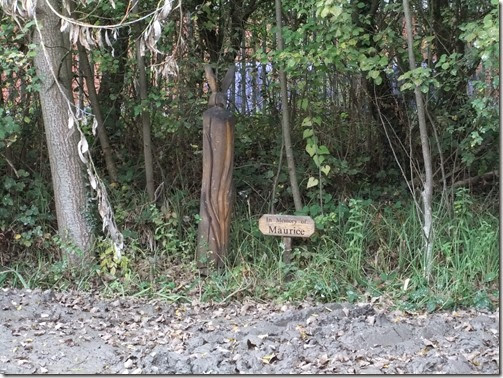 We then had to run the gauntlet of the dredger again! This time after waiting for a boat from the other direction! 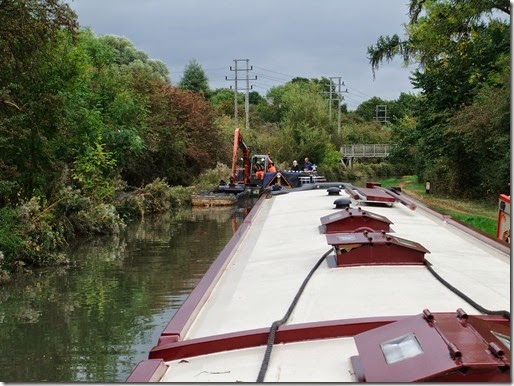 The other thing that is going on at Brownsover is the demolition/renovation of the retail park that used to house Wickes/Next etc – apparently there will be a Marks and Spencer there when it is rebuilt. Pizza Hut and Halfords are still there and open for business. We will watch this with interest!

As we went past the moored boats this one stood out – what a strange name – does anyone know what it means? 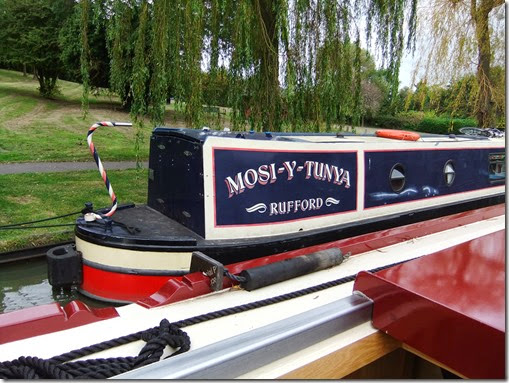 We were soon moored below Hillmorton Locks again – this time for a quiet evening!

The next day saw us slowly ascending Hillmorton Locks at the back of a queue of 5 boats. Due to gate replacement works at one of the top pair, only one of each pair of the other two locks was in operation to stop the pounds being drained.

A view you dont usually get of one of Hillmortons top lock gates! 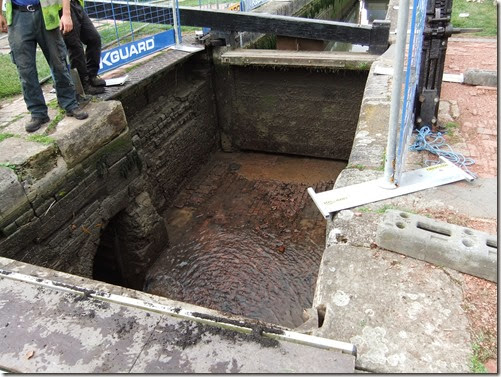 We moored at Onley, one of our familiar winter spots!

The next morning it was lovely sunny and bright – there wont be too many more of these to look forward to over the next few months! 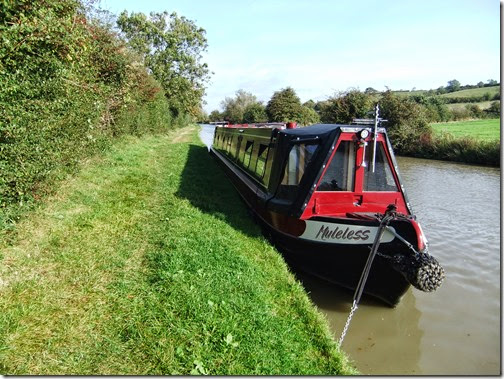 We set off to Braunston, and were surprised to find it really busy and hardly any mooring spots left! Even the towpath from bridge 89 onward was full! 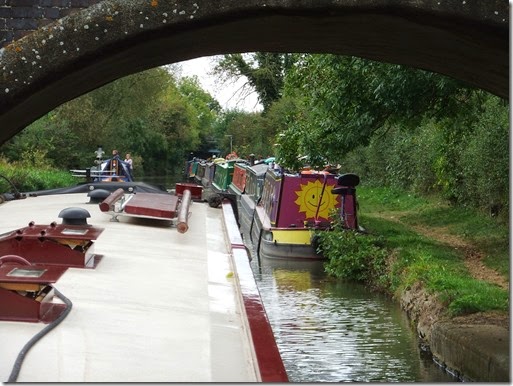 As we passed the junction there was a spot that was not quite big enough for us, but the boat moored behind soon moved their boat back enough for us to get in. As we tied up and chatted to them, we realised that they were James and Debbie on NB Lois Jane – friends of Doug and James and they knew all about us and our hybrid boat! We chatted to them for a whilst, and discovered they too were from the south coast – Plymouth.

Whilst we had chatted the boat in front of us had moved off, and very shortly after NB Blue on Blue moored up there. We had been passing them regularly last winter and often waved to each other but never chatted before. We of course took the opportunity to have a proper chat. James and Debbie had now headed off to Midland Chandlers who were having one of their Freaky Friday events (20% off everything) – maybe that was why it was so busy!

As we chatted to Mike and Ethel from NB Blue on Blue we discovered that Mike was also originally from Fareham – what a small world, and that he and Ethel (who is from Germany) only moved on to the canals last year! By now we had realised that NB Swamp Frogs was moored further up, opposite the Boathouse Pub, and then as a space appeared on the pub moorings, who should arrive and moor up but Richard and Sharon on NB Oakapple! It was a convention of southerners!

We shouted greetings to Richard and Sharon who were with their visitors. There was no-one onboard Swamp Frogs.

We were meeting Yvonne and Roy for dinner in the pub, they had lots of mail for us including our new Boat Licence! We hadnt seen them for quite a whilst and had a lovely evening catching up.

And who should we see also in the pub? Rob and Suzie from Swamp Frogs! We said hello and promised to catch up properly the next day!

Saturday was not such a nice day weather wise, so we decided to stay put. We had been going to pop along to Swamp Frogs for that catch up – but by the time the weather had improved we realised they had moved across to moor outside the pub (ready to meet their visitors on Sunday) – way too far to walk!! Rob later shouted across to Gary and we arranged to meet for drinks in the pub in the evening.

After dinner on Muleless, we made our way round to the pub and had a great evening with Rob and Suzie – I forgot to take a picture! We were ushered out of the pub after 11pm as they were trying to close up!

The next morning Gary took a very atmospheric picture of the misty canal – plenty of mooring space again now! 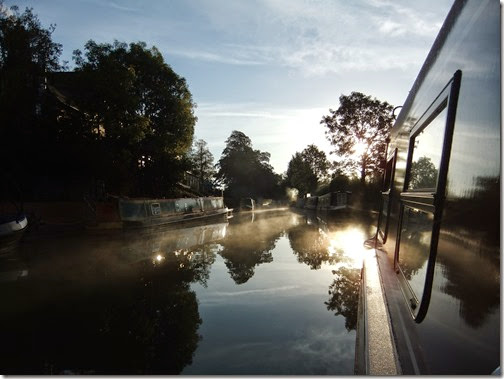 We set off – heading down to the elsan/waterpoint to pump out and fill up – passing Swamp Frogs on the way. No sign of Rob and Suzie as they were busy with their visitors! 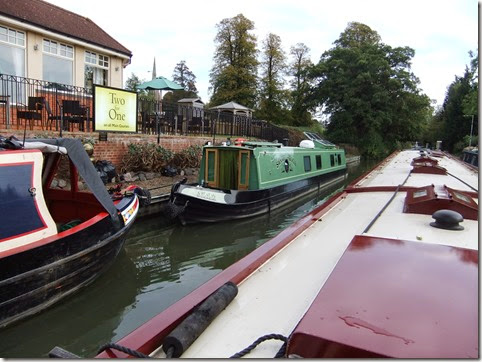 We now had a bit of time before we could head towards Banbury, as we had to be back to Braunston in a few days for a meeting and to collect some bits from Wharf House Chandlery, so we spent the next couple of days moored out in the country, before heading back on the right day.

When we finished in Braunston we finally started heading back to Banbury for the last time this year.

You can tell it is the end of the holiday boating season with all these boats moored at Napton Marina. 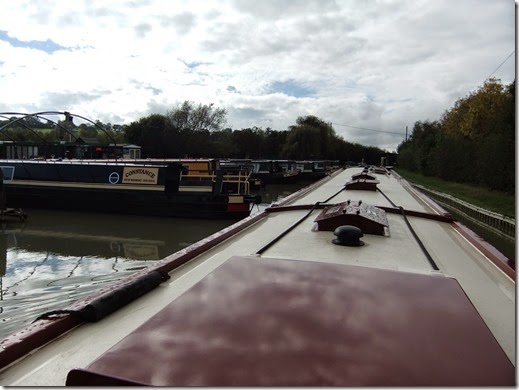 As we approached Napton Locks we could see this new house being built on the hill – what a view they must have. 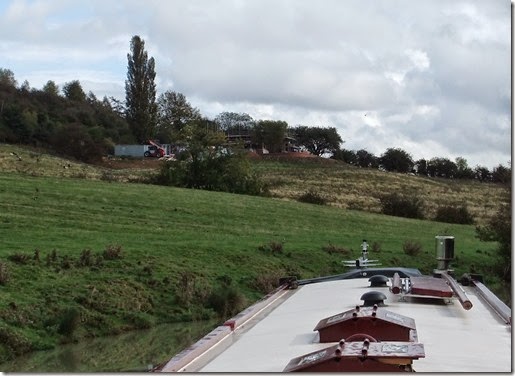 As we made the final approach we saw this appropriately named boat – a real Yoghurt Pot!! (Narrowboaters name for a plastic cruiser!) 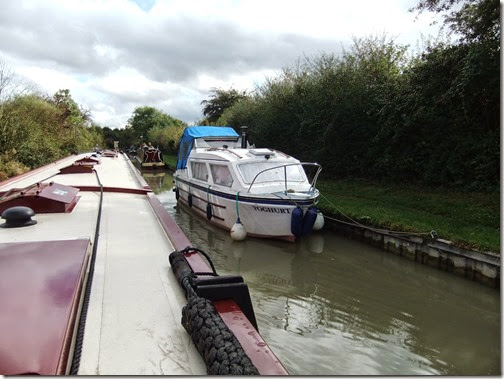 As we filled with water at the bottom of the locks the heavens opened and we were pelted with hailstones – at least Gary was, he was dressed correctly, I sheltered in the boat! 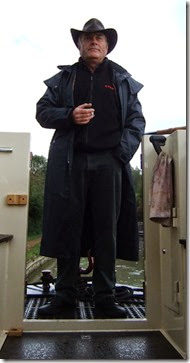 By the time the water tank was full the rain had stopped! So we set off up the flight wearing rain gear just in case it started again! 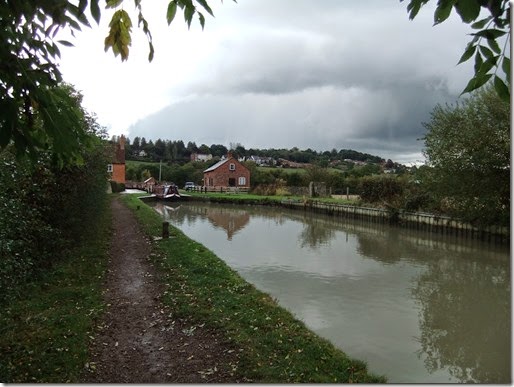 Most of the pounds were really low – so we definitely need that rain! 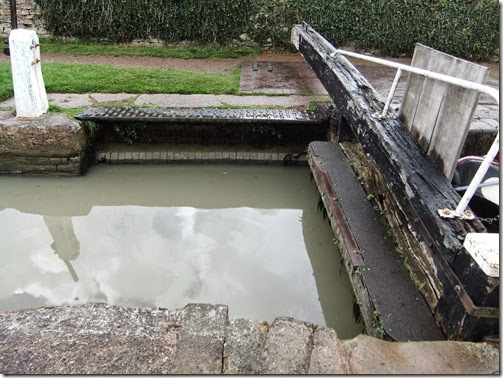 We moored up on the long pound below Adkins Lock – just in time to miss another downpour!

Later, these clouds made it look like a mountain range, not a single hill! 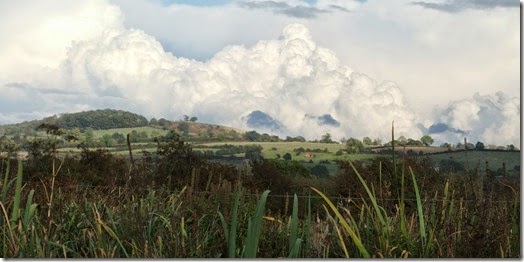 And this was my best attempt at catching the rainbow! 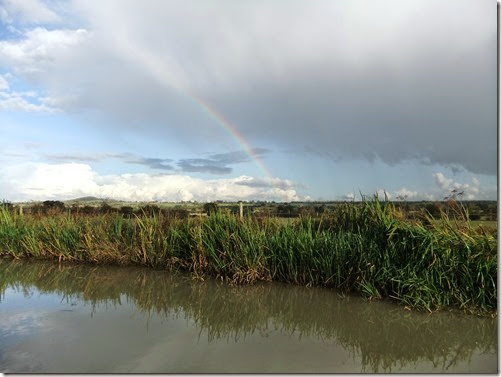 So now we are virtually up-to-date.

Yesterday (Sunday) we left our nice mooring (Gary had just moved the boat from our mooring spot two boat lengths back, onto the lock landing) 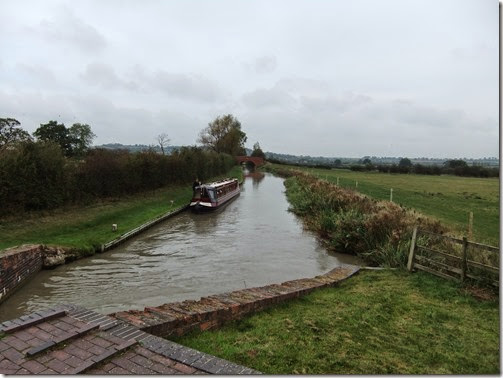 Not only was the pound above low, but the overspill weir could do with some work too! 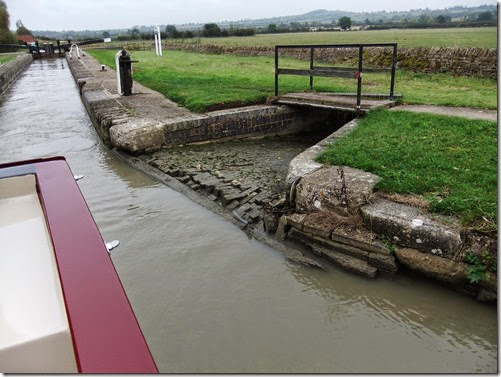 We are now moored on the summit pound, between bridges 129 and 130, we had a fantastic sunset last night. 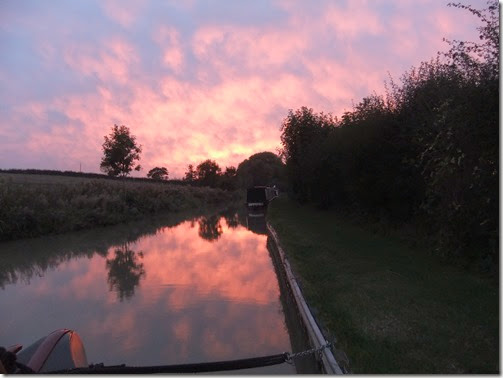 Today we have stayed put! The rain has come down all day long. The forecast is not brilliant for the next few days, so we will have to pick the right moment to move on!