Visitors, visiting and finally on the move again!

We seem to have been lurking around the Braunston area for months – and it is a lovely area – but we will be really glad to move on again!

We were expecting visitors, so moved back from Brownsover to Braunston on 8 January, and again it was me steering the boat through Hillmorton Locks! 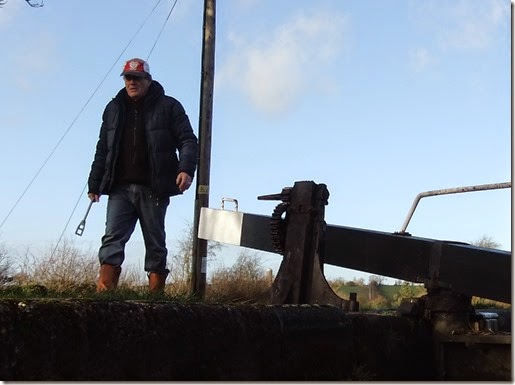 The bottom lock went well, and I headed off slowly through the pound. 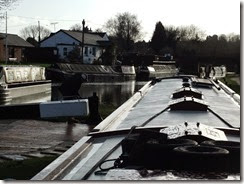 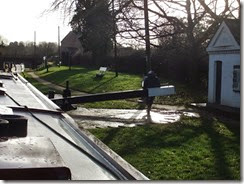 No pictures of the next lock – as it went a bit wrong!!

Gary had the gates open for me on the right hand lock of the pair – but I got the angle all wrong on the approach and managed to hit the approach wall – and seriously tip the boat at the same time as I scraped into the lock!

Gary kept his cool (well done!!) closed the gates behind me and opened the paddles – then went to look for any damage!

Apart from a fresh scrape to the thickest part of the bow, there was no visible damage, so despite now being really nervous, I carried on.

Entry to the last lock went fine (phew!) and we were soon out of the top! 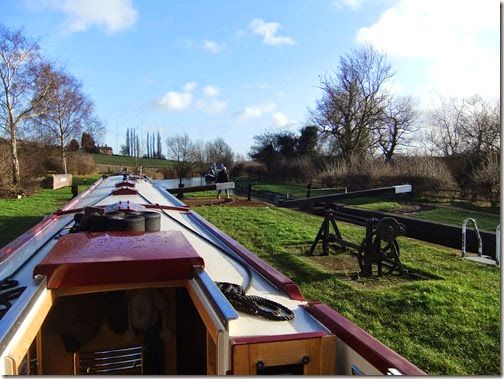 As soon as Gary was back on board I had to go into the boat to check on damage inside – a few things had slid about, I had to carefully open cupboards and push tins and jars back away from the doors – a couple of glasses had “leant over” in their cabinet – but nothing had broken – a miracle!!!

We were soon safetly moored up in Braunston again, ready for our visitors on Sunday.

Nicky and I went to school together in Portsmouth, and although we havent seen much of each other over the years, we do catch up occasionally.

We met Nicky, husband Nick, and son Ewan in the Boathouse Pub and had a great couple of hours catching up.

Then of course it was back to the boat for a guided tour and some posh coffees! 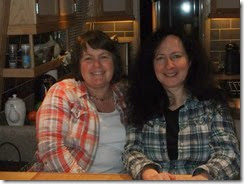 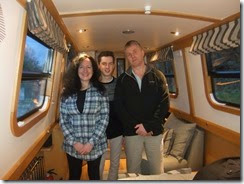 It was great to see you all, hopefully we will see you again soon!

We had been moored in front of NB Inca whilst at Braunston this time, we had not met before, but it didnt take long to get chatting – it seems Gary and Carolyn read this blog – and I now read theirs too! We didnt get chance to meet up for a drink – but I’m sure we will get the chance soon! The two Garys were soon comparing notes on oil changing – and we were soon shown the oil extraction pump that Gary uses (much smaller and easier to store than the one Keith on NB Oakfield has).

We had to move again – this time back to Wigrams Marina ready for another trip down south and waved goodbye to Gary as he was doing his oil change! 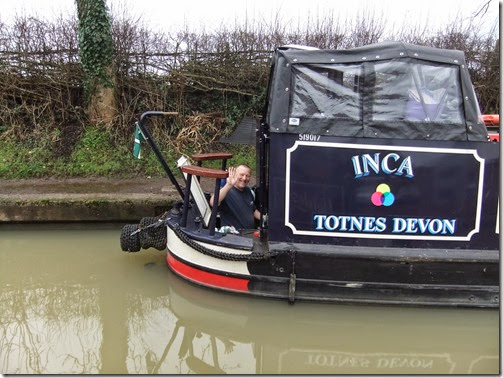 Another trip down south, staying with Mum again – she will get fed up with us soon!

This time we visited Terry and Wendy and admired their new kitchen (which is still a work in progress, but coming along lovely).

Friday evening was a gathering of ex-railway workers in Havant, we had a great evening and Gary was pleased to see so many “old” friends!

Saturday evening we met up with one of my old work mates Debbie and her partner Alan in ‘Spoons at Port Solent! 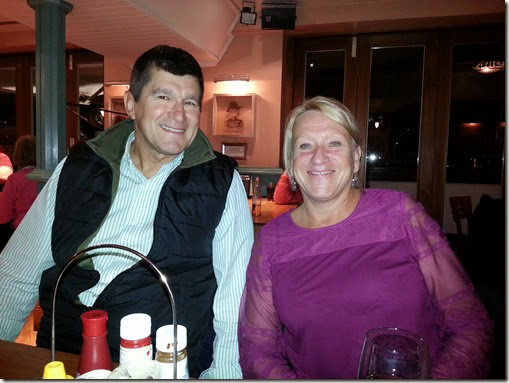 Deb and Alan have the canal boating bug – they have been with a group of friends for 3 years running – hopefully they will visit us on the boat soon!

Deb and I worked out that we have known each other for about 35 years! It is definitely a week for getting together with “old friends”.

All too soon our visiting was done and Sunday we headed back to the boat.

Monday afternoon we moved out of the marina and moored just outside. The car was taken back and we settled down to a relaxing evening.

Tuesday morning we woke to the canal totally frozen over, and after testing the ice we decided it was too thick to move in!

We went for a walk, testing the ice as we went. 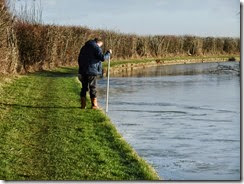 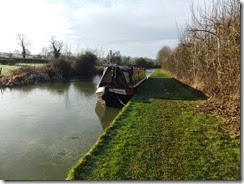 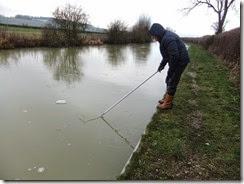 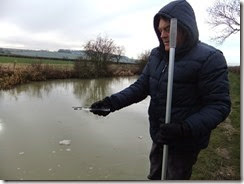 As we walked back we passed this boat “ice breaking” – it was struggling with the bends! 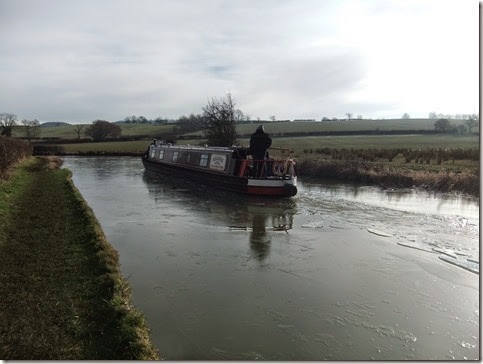 As we got back to the boat, these boats went past apparently heading for Rugby – I dont think they made it that day! 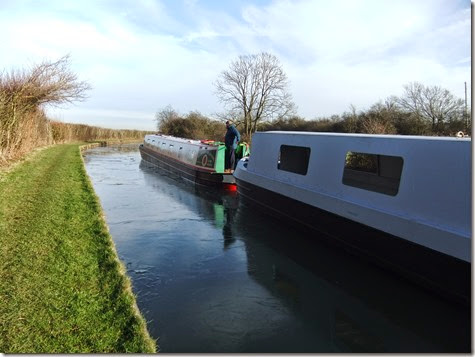 The next day the ice had mostly melted, so we headed back to Braunston!

I needed a haircut and Charisma in Braunston had done a good job last time. We topped up with some wine in the shop and then wandered along to the locks to see the work in progress.

The pounds below and above the Admiral Nelson are completely drained and the lock has been set up ready for the open day on Sunday 25th. 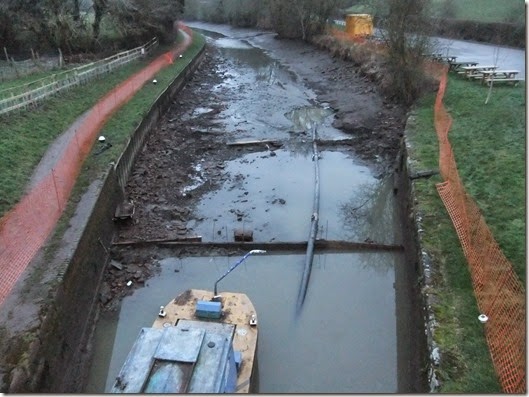 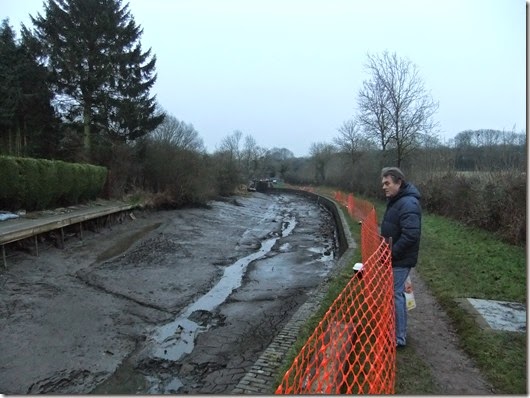 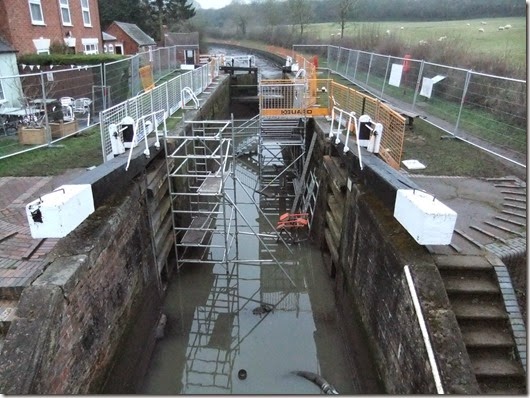 Thursday was time to leave Braunston for the forseeable future! At last!

Of course first we had to top up the water tank – using our new mini hose from The Range (purchased whilst down south). 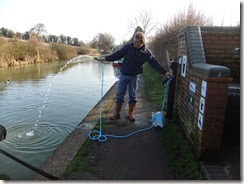 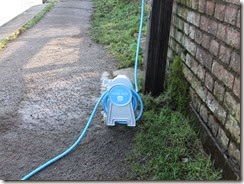 We had decided that our fab flat “food safe” hose wasnt quite long enough at times and when we saw this one, which is really small but still 10m long (so easy to store in our “gas locker”) we thought we would give it a try. The hose seems to be silicone like, really soft and easy to handle and roll up.

So then we were off, heading for Hillmorton locks again (ooh-er!)

So here we go again, for the last time this season, down the Hillmorton locks!

No dramas this time (phew!) everything went smoothly, so just a few photos of Gary doing his death defying leaps (I’m not brave enough and my legs are too short!)! 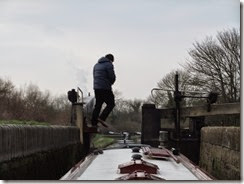 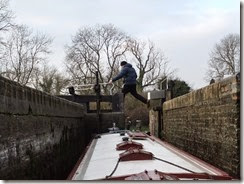 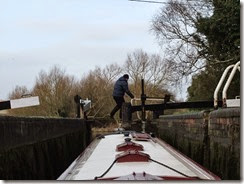 We moored up on the 24hr moorings at Brownsover – right opposite NB Oakfield and NB Inca!

The next day the canal was frozen again – but it didnt matter, we did our shopping and had a short conversation across the canal with Keith and Ann, and then relaxed on the boat. A boat had broken the ice in the afternoon, but there was still a lot around, so we stayed put.

Saturday we headed off again waving goodbye to NB Oakfield and Inca on the way. 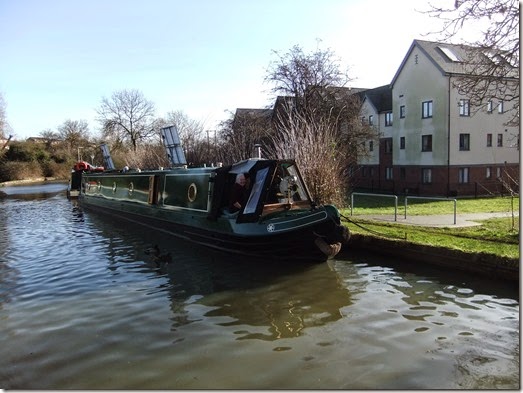 We topped up the water tank again at Newbold and then moored up at All Oaks Wood.

Sunday the canal was frozen again – but not for too long – NB Parisien Star came past, breaking the thinning ice as they went. 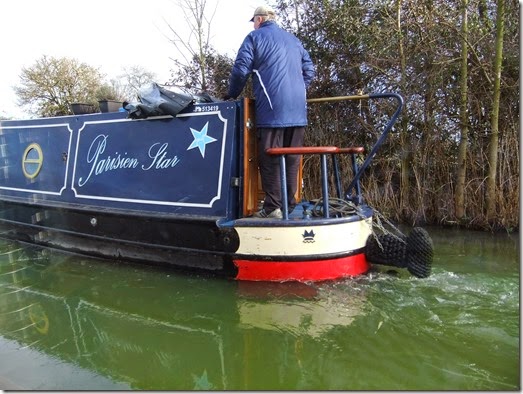 Its a shame we didnt meet Elly and Mick whilst they were on the canals!

We treated ourselves to brunch this morning – the first chance to try the free range eggs (and mini eggs) given to us by Nicky and Nick (from their own chickens) – delicious! 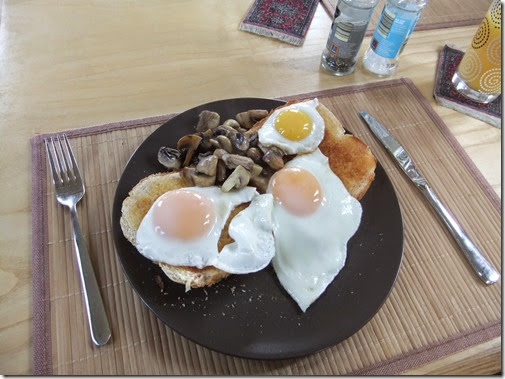 Onwards tomorrow – heading for more retail thereapy in Ikea Coventry whilst waiting for the stoppages to finish!