On to new territory!!

We only needed to stay one night in Wigrams, so even if the lock at Napton wasnt fixed we still had to leave.

Whilst I was on the computer, one of the resident ducks wanted to see what the internet was all about! 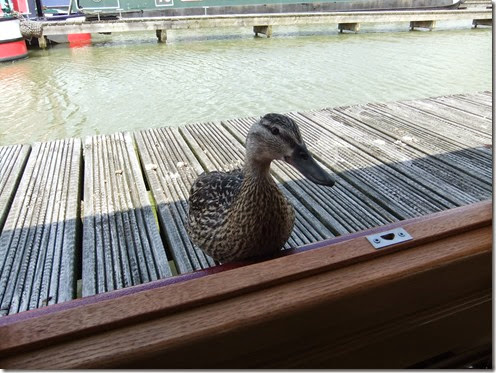 She spent ages watching me through the side hatch!

During the morning Gary saw NB Festina Lente heading out of the marina, and told Andy about the stoppage at Napton.

About 2pm one of the lovely ladies in the Marina office let us know that the lock would be fixed by tea time (she had been checking to be sure there were no problems for the Black Prince Hire Fleet based at the marina).

We sorted ourselves out and headed off towards Napton at 2.45pm, we thought it would be really full at the moorings, with boats waiting to go up, but we found a spot, just in front of Festina Lente, and I walked round to see when the locks would be open. I was surprised to see a boat just coming down to the bottom lock, so nipped back round to Muleless and found Gary chatting to Andy on Festina Lente. In our hurry to get off and up the locks, I forgot to take a photo! Hope to catch up with you properly soon guys!

There are CRT staff manning Lock 10 from 8am to 6pm, with last entry at 5.30pm on weekdays, so we didnt want to miss the chance of getting past, as it was nearing 4pm so we started up the flight, and were soon passing through the “problem” lock. 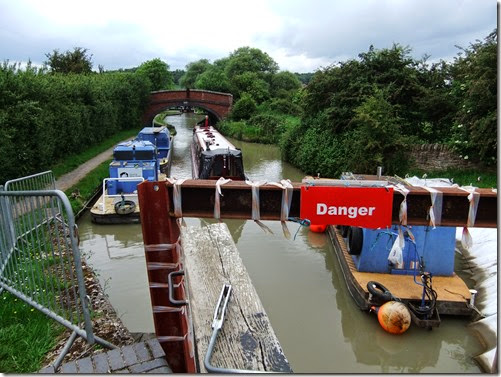 The weather had started off being fairly sunny, but as we made our way up the locks, the rain started, and turned out to be more than a passing shower!

We passed a couple of boats coming down the locks, and then found NB Bones moored in one of the pounds – no sign of Bones and Boots though! 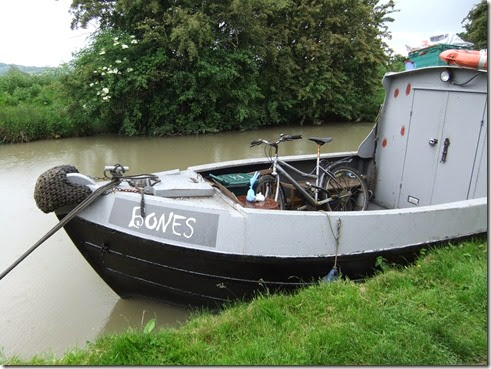 We passed the Buffalo (of the Admiral Nelson’s Buffalo Burger fame!).

We went through Lock 14 and apart from some fresh wood shavings, couldn't see where the problem had been! 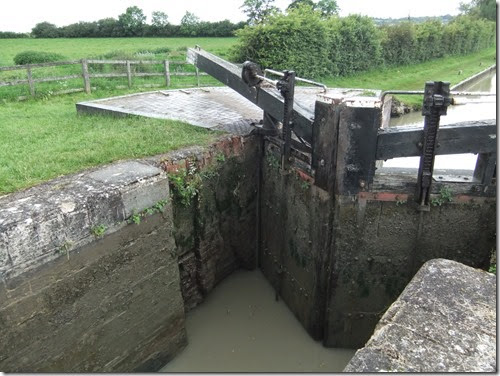 As usual, as we came up Lock 15, we noticed the pound was very low, but managed to slip through and get to Lock 16! 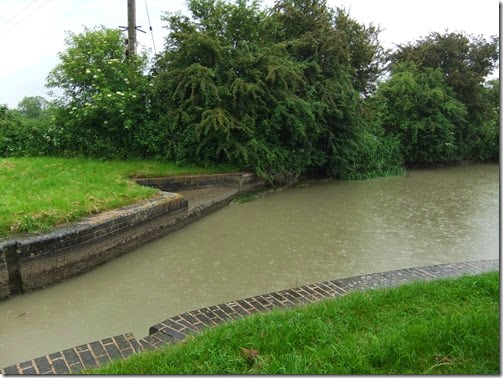 As we had used electric drive on the Napton flight, we motored on (past our “broken cable” spot) for a couple of miles to get our batteries back up to 100%, and then we moored for the night.

Wednesday was forecast to be rainy, and it was! We didn't fancy a day sitting about, so at about 11.30, equipped with our waterproof coats and hats, we pulled pins and motored off. No photos as it was raining too much!

By half past one we were getting close to Fenny Compton and the Wharf Inn, when the rain got even harder, and we decided that we would stop there instead of carrying on to the top of the Claydon flight of locks – it was definitely a good move. We got a spot right next to the water points and close to the pub, and after seeing a sign saying 2 meals for £10 decided to try out the pub’s food!

Unfortunately, we waited until 7.30 to go to eat, and the 2-4-£10 deal was only until 6pm! Never mind, we still had some very nice food, so next time will make sure we go at the right time!

Thursday morning was a totally different day, weather wise! The sun was out and everything was drying up quite quickly. There seemed to be a steady stream of boats pulling in behind us for water, but eventually we managed to pull back to start to fill our tank – unfortunately we were on the slow tap!

Whilst we were filling there was another boat behind us on the other tap, and then someone brested up to him, to be next to fill, and then another boat squeezed by to head under the bridge! 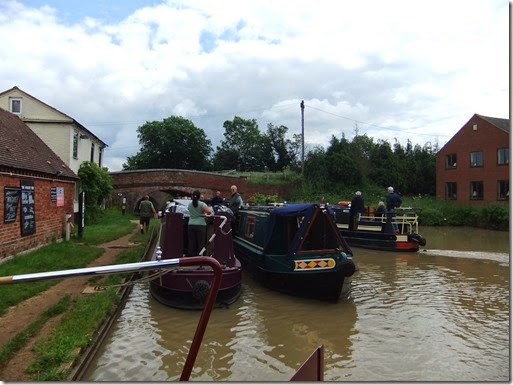 By then there was also a hire boat in our mooring spot waiting to take our place at the tap – so it was a real juggling act to get all the boats swapped about!

We moved off – and passed Festina Lente who had just passed us and moored up! Again, I forgot to take a picture!

A bit further on, is the Fenny Compton “tunnel” – now just a narrow stretch and of course, we had to meet a boat coming towards us – luckily not on the narrowest section! 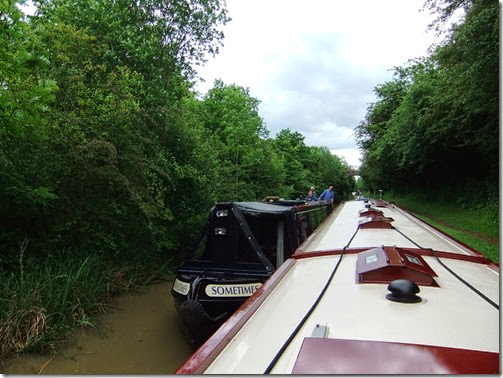 And just ahead before the bridge, someone had actually moored up forcing everyone to use the shallower part of the canal! 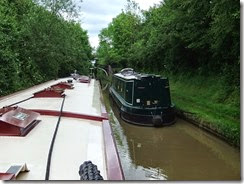 A bit further down, as the canal runs by the railway, there is an overflow – running really fast after all the previous days rain! 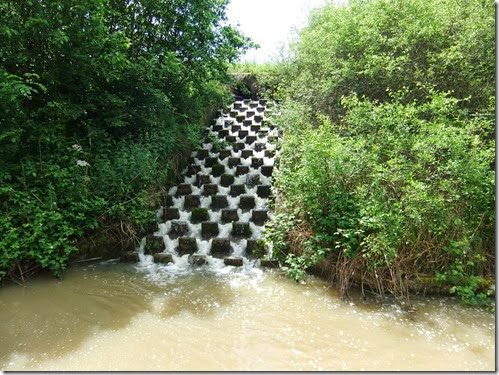 A bit further on and the railway goes into the open, and a train went by – loaded with vans!

As you can see, we were being followed by another boat, so when we reached the top of the Claydon locks, we moored up for lunch – and the other boat went straight on down!

After lunch, I walked to the top of the flight to get the first lock ready – and just then two boats came round the bend and stopped Gary getting Muleless away from our mooring – so we ended up being in a queue to go down the locks!

Never mind, we are not in a hurry – just hope they don't get all the mooring spots in Cropredy!

The weather was still glorious, and we made steady progress down the locks. 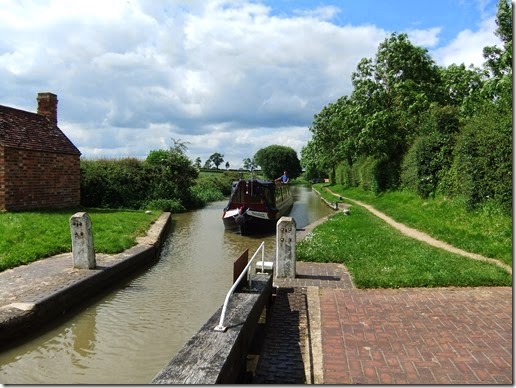 Gary had the camera for a change, so a steerer’s eye view (of me having a rest on the lock gate). 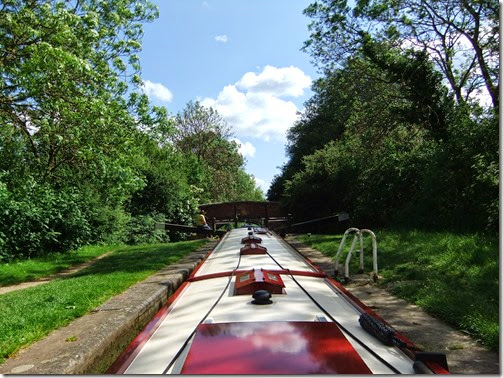 The boat that had sunk last time we were here, has now been floated, but still looks in a sorry state. 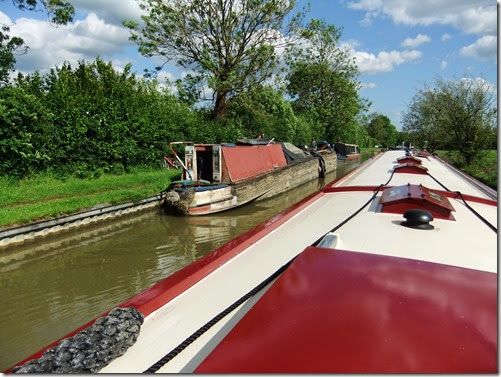 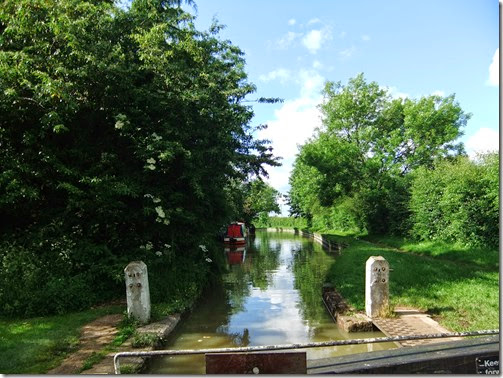 There was room to moor at Cropredy – just 2 spots left! and they were all full later.

Friday when Gary got up all but one of the boats had already left, and then that one did too! By the time I surfaced we were on our own!

We set off at 11.20 (about our normal time!) headed down the lock and pulled onto the water point! We got there just in time, as the CRT guys were going to load up their workboat with all the fencing for the works on lock 22 on 11/12 June. 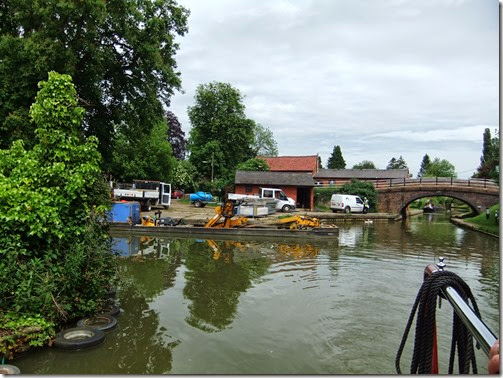 Just round the bend (there are lots of them on the south oxford canal!) CRT are repairing the towpath that was washed away during the winter floods. 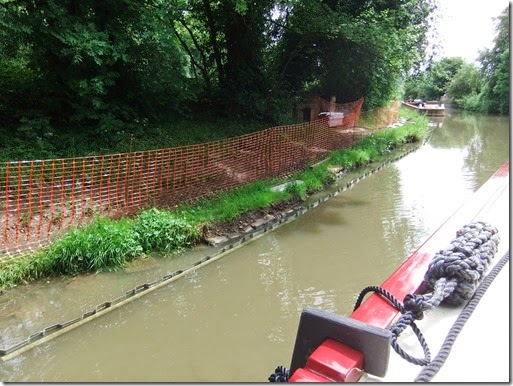 We made steady progress to Banbury and moored up in Spiceball Park at 2.20pm.

We settled ourselves in, and walked up to the shopping centre, passing very full moorings! We prefer to be back at the park away from all the shoppers. After a quick look round (ready for a proper shopping trip tomorrow) we headed back to the boat and made a shopping list to take to Tescos – and then headed off to top up the cupboards! We ended up with a very late dinner!

Saturday started off raining (again!) so we didn't rush off out. We eventually went out separately – me to go clothes shopping – and Gary to go DIY shopping! By the time we got back to the boat, the sun was out and we decided to just chill out for the rest of the day.

Sunday was the day to head off to new territory! So we set off at 11.40 (!) and as luck would have it someone was just leaving the waterpoint by the shops – so we pulled in to top up the tank!

Just as we were ready to leave, another boat arrived to use the tap! Good timing for a change!

We headed off down the lock at 1.50 – at last we were on new water on the way to Oxford!

The turning point that attacked us in December – new territory beyond. 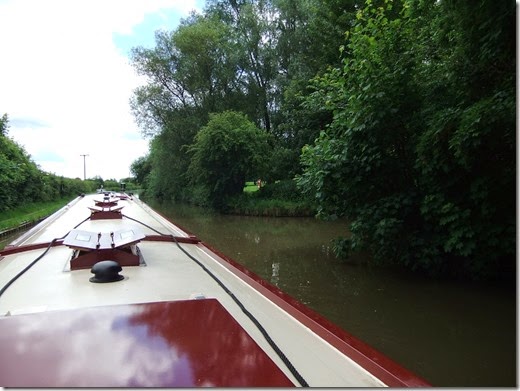 Just a little further on, at the first lift bridge (No. 170) we saw it was down (it should usually be left up and open) 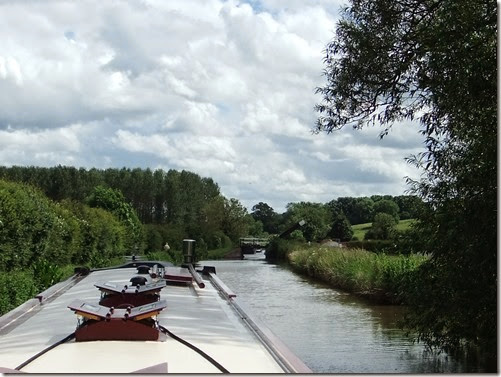 The first problem was the only place to pull in (on the right – non towpath side) was too shallow for us to get close enough for me to get off – so Gary had to nose up to the bridge for me to jump off the front. Then I went over the bridge and hung on the piece of rope to pull the bridge up for Muleless to go under.

Then I was stuck! I couldn't make the bridge go back down to be able to get back to the boat! Luckily for us, there were a couple of boats moored just after the bridge and as Gary pulled in to work out what we could do, two of the guys on the boats came back to the bridge and pulled it down for me to cross back! The problem then was getting the bridge back up out of the way of the next boats through. They managed to push it back up – it wasn't easy, obviously the balance is off! Apparently some walkers had come across the bridge and left it down a short while before. I seem to remember Sue and Vic on NB No Problem had difficulties with this bridge during the winter!

As we pulled away, with the offending bridge up out of the way, another boat came through it – they don't know how lucky they were. 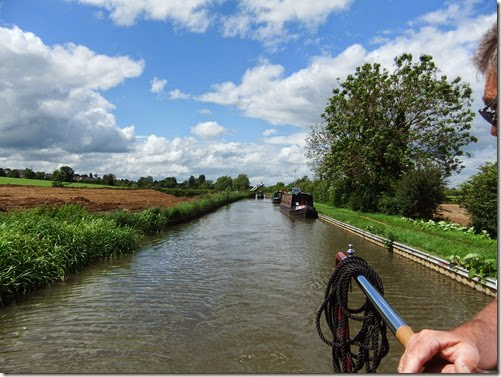 The rest of the lift bridges we came across were all up! 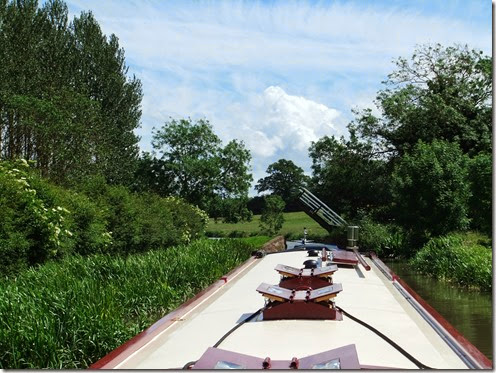 For years we have driven up and down the M40 seeing the Oxford Canal below – now at last it was the other way round! 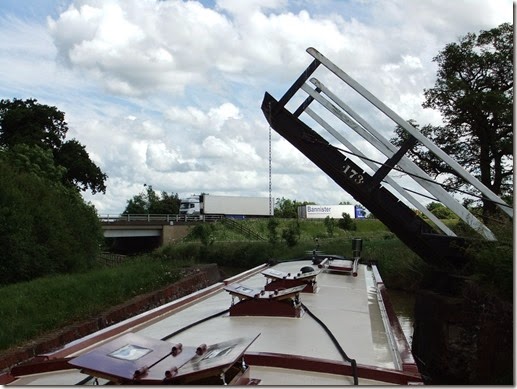 Just a bit further on we arrived at Grant’s Lock, and as I started to fill it for us, the other boat caught us up. 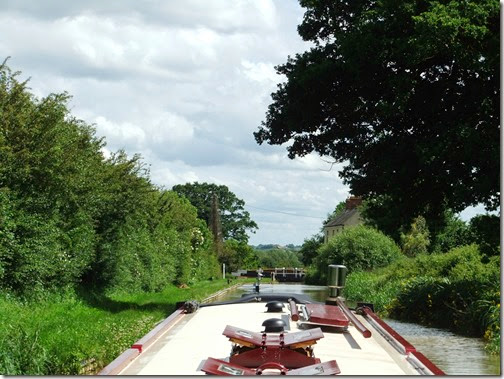 As we worked through the lock, another boat arrived at the top – suddenly it was really busy!

Someone has been busy tidying up the trees here. 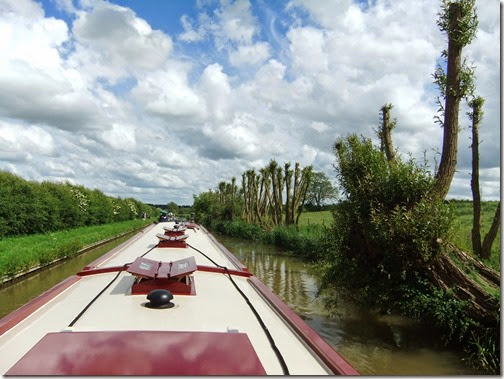 There were a few boats moored here, it was a nice sunny spot, but the noise from the motorway was a bit off putting for us!

We arrived at Kings Sutton lock, and as I filled it for us to use I noticed that the lock cottage is for sale (as is the cottage at the top of the Claydon Locks!) anyone wanting a nice cottage in a remote location either of these will do you! 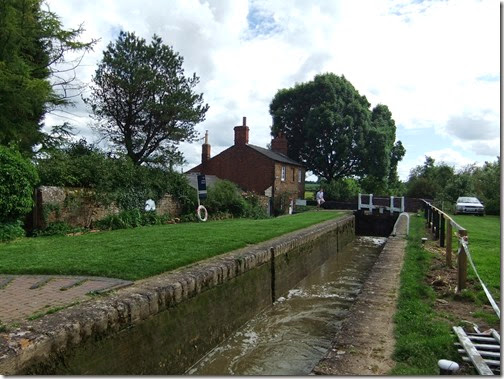 As Muleless went down in the lock, I had to double check we weren't in Somerton Deep Lock – as this one seemed really deep to me (this one is 10ft 8in deep – Somerton is 12ft!) 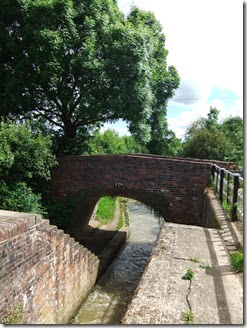 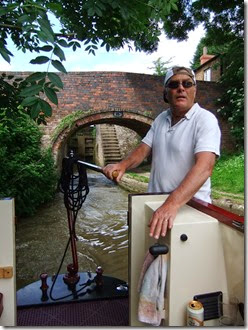 Lift bridges were coming thick and fast, but they were all open, so no problems there, and then we headed under the motorway again with another lift bridge just the other side! 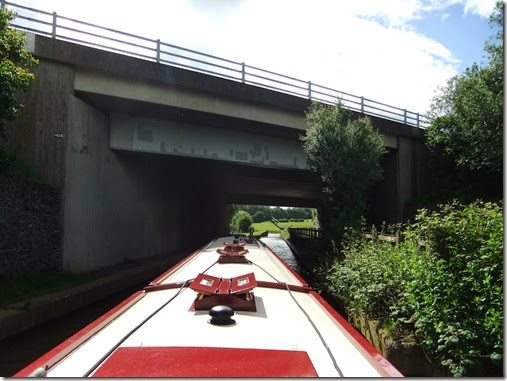 We passed another lovely canalside house 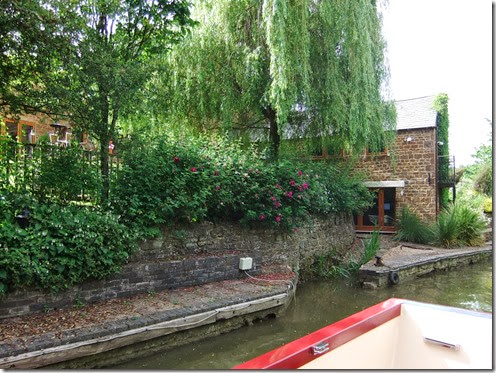 By now the noise from the motorway was less, and we had recharged the batteries from 80.8% to 96.8% in two and half hours, so decided to moor at the next available spot.

We were approaching Haddens Lift Bridge and the Farm Shop, and there was space on the towpath opposite.

We moored up and then walked down past Nell Bridge Lock, on to Aynho Weir Lock to see how fast the river was flowing after all that rain! Whilst we were there a hire boat came through and we could see where the potential problems were, so we are now ready to go through the lock tomorrow.