A change of plans!

On Friday evening we had some visitors.

Gary was having a cigarette with the cratch cover wound up, and these two cheeky chaps decided to pay us a visit and get fed! We couldnt refuse.

At the same time we noticed how good the Boathouse pub looked reflected in the water! 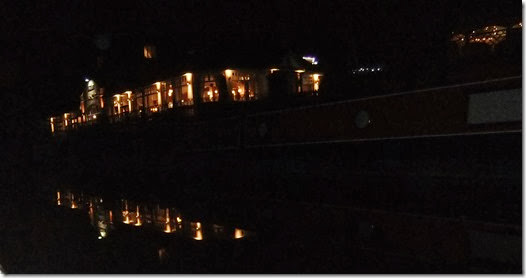 On Saturday morning Martin arrived to have another go at fixing the leaking window. This time he removed the window and added more sealing tape before replacing the window. This seems to have worked (so far). When we return to MGM in the Spring the windows will be checked and adjusted as necessary to make sure no further problems arise.

We were keen to do a test run with the “fixed” engine, so after 4 days moored opposite the pub we headed off – to the water point (first) and then turned in the marina entrance and headed off (with quite a few other boats) back down the Oxford Canal towards Napton Junction to give the batteries a good charge!

We ended up in a 5 boat convoy all the way to the junction, where we turned round (along with one of the others in the convoy) and headed back towards Braunston. We moored up by Foxes Gate after 3 1/2 hours running – very pleased with the performance, batteries charging nicely, both alternators working as designed AND NO HUNTING!!!!! Bliss.

Sunday we had decided to stay put, but then we had a phone call from Niece Natalie asking if we would like to go for Sunday Dinner at Yvonne and Roys with the rest of the family – and they would collect us if we wished. So we moved back to Braunston so we could take up the offer, as it was easier to collect us from there.

Pulling away at Foxes Gate, who should we find moored a few boats ahead but more bloggers! 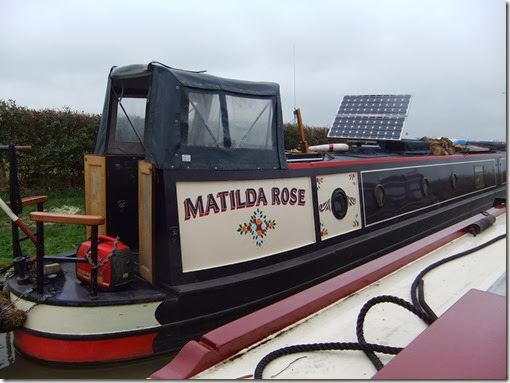 Graham was inside, and Jill was outside with the dogs – we waved on the way past! 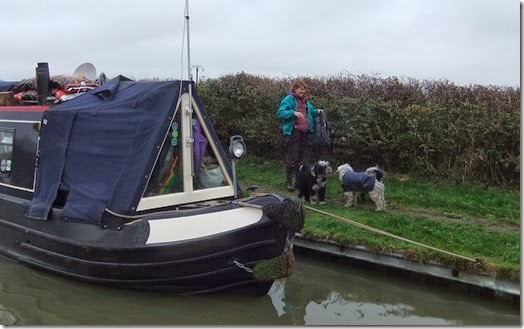 Sunday lunch was hectic with 8 adults, 2 kiddies and 2 dogs – and I forgot to get the camera out again! Thanks to Yvonne and Roy for a lovely meal, and Nat and Matty for collecting us, and Nicole, Ben, Riley and Freddy for being there too!

We had a change of plan on Monday. As we had moored to the left of the junction at Braunston (opposite Midland Chandlers) and were facing north (ish), our original plan had been to head towards Rugby to shop in Tescos, but first we had to fill with water at the tap opposite!

As you can see, we are not the only people that do this!

Looking back at the junction at Braunston.

As we headed off, the weather decided to deteriorate and the drizzle started!

The weather forecast for this week is mainly cold, but with heavy rain forecast for Wednesday, so we decided to leave Tescos in Rugby for another time, as we had decided to head back to Warwick for the weekend, as my brother Terry and his wife Wendy were heading up to Birmingham for the Christmas Market and were going to visit us on the way.

We headed up the Oxford and turned at the winding point by Hillmorton Wharf, and headed back to Braunston, another battery charging test run successfully completed. We arrived back at Braunston just as darkness fell, and we moored back in the spot we had left in the morning!

Tuesday we made a fairly early start for us – 10.30 am, and headed off towards Napton Junction (again!). We turned right onto the Grand Union (dejavu here definitely), and headed down the Calcutt Locks after a brief stop to fill our diesel cans ready to top up the tank for our diesel stove – we didnt want to get caught out with this cold spell upon us!

We steamed on, determined to get through the Stockton Locks in the sunshine and started down the flight at 3pm! 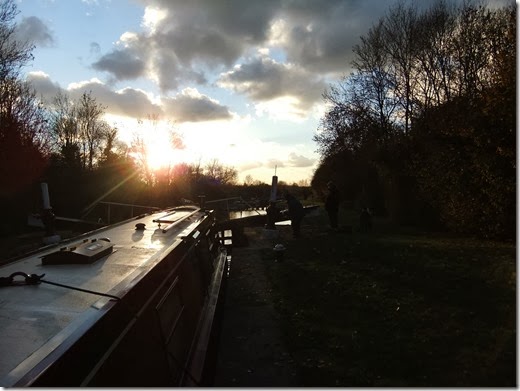 We made good progress – and not a drop of rain in sight! 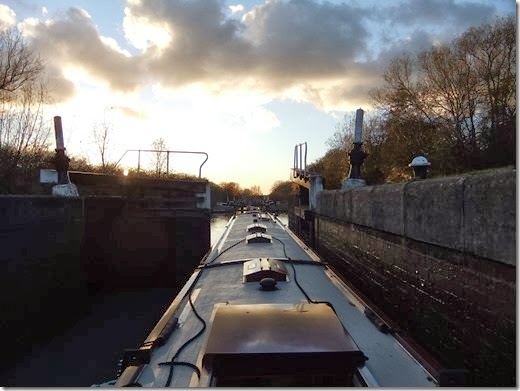 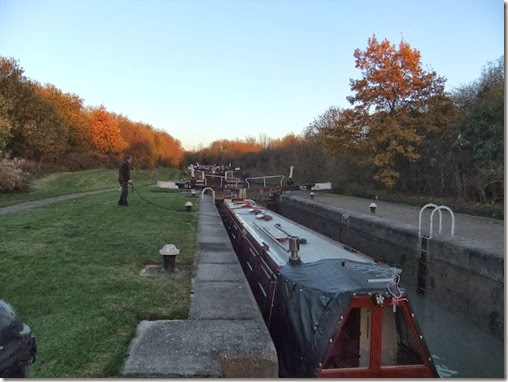 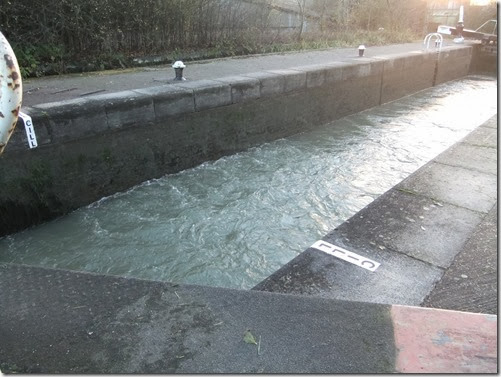 leaving Gary to move Muleless out of each lock and shut the gates behind him! 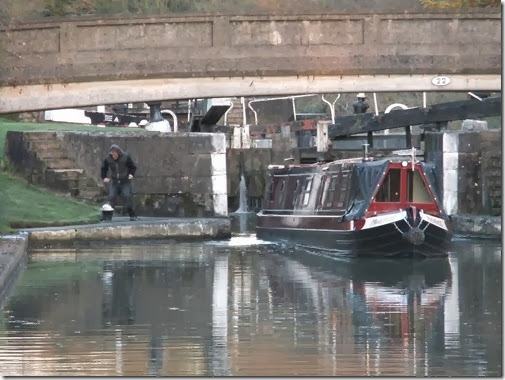 and then move on down to the ready lock ahead! 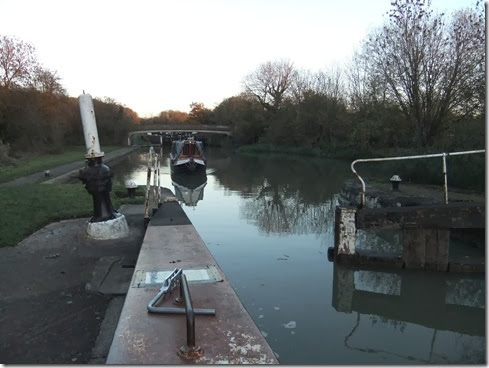 We made it to the bottom of the 8 locks in 1 hour 15 minutes! Now we just had two more locks to go through before mooring for the night just below the Two Boats pub – of course by the time we got through them the light was fading fast and Gary had to put on our super bright LED tunnel light to see where he was going. He was running on electric drive and several boaters peered out of windows to see the “ghost boat” float by!!

There was a brilliant atmospheric scene as we passed the Blue Lias Pub and the boats on the moorings there – but unfortunately the camera decided it was full so I couldnt take a picture!

Wednesday, we had a lazy day sitting out the rain, just going for a walk to the Co-op in the village in the afternoon and returning via the locks to take a picture - not as good as last nights shot would have been! 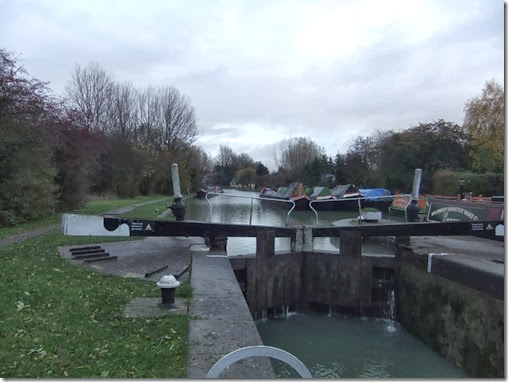 Just then the rain came down again – so we sheltered in the Two Boats with a couple of drinks, before returning to the boat to prepare dinner and write this blog!

Blog posted from Warwick on Saturday, as no internet signal for a few days. The rest of the journey will be in next blog!