Where did that week go?

I had intended to blog twice a week – I think it might take a whilst to get into the habit!

So what has happened this week?

Last Tuesday night we were moored by Spode House, so on Wednesday our first stop was the water tap! (I see a pattern emerging here!) After a quick fill up we plodded on towards Rugely – passing the power station, which looked a bit grey and ominous. 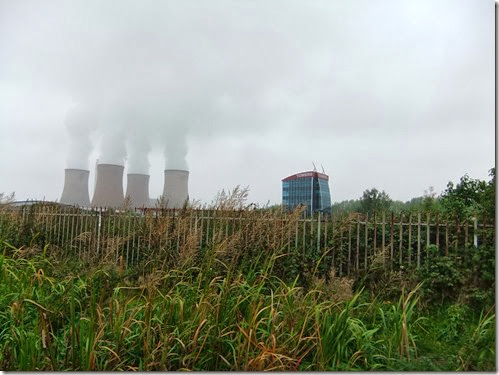 We moored at Rugely town centre to do some shopping in Morrisons – the new Tescos didnt look open yet.

We  pottered on and headed for the aquaduct over the River Trent after the sharp right bend! 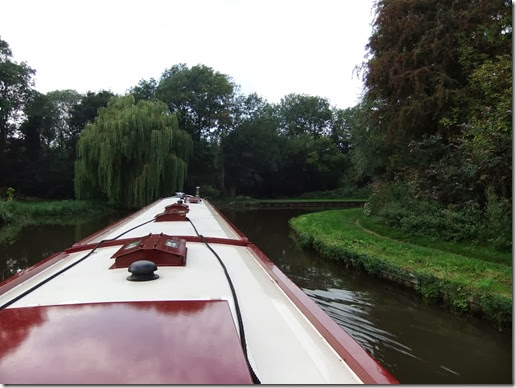 We moored up at Wolseley Bridge for the night – along with loads of other boats! 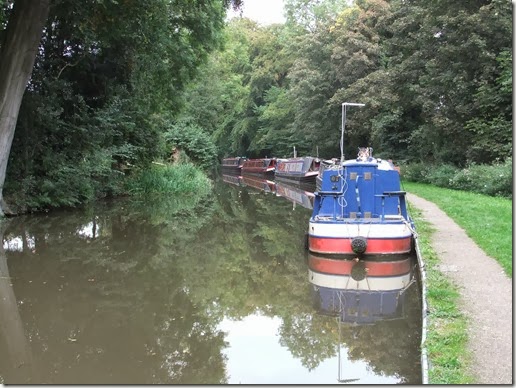 During the evening there was a load “crack” and the sound of a tree crashing down – everyone rushed out of their boats and we discovered a very large branch had broken off of the tree in the left of the picture above and was still caught in some of the branches – but was looking very precarious! Boats were shuffled along and a gap was left opposite the tree – just in case! But in the morning the branch hadnt moved – keep an eye out for it if you are mooring there!

Thursday saw us moving on towards Great Heywood Junction – we found this “floating garden” along the way! 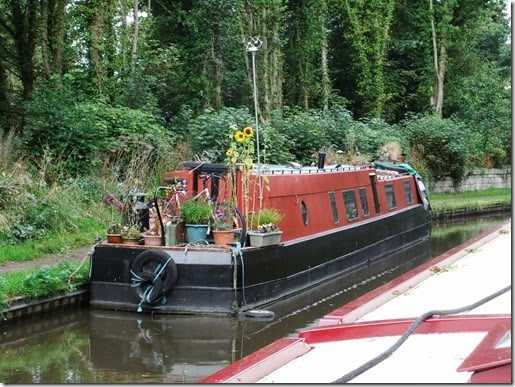 Of course, we cant pass a water point without stopping – so we paused to fill up and then carried on up the Trent and Mersey, passing Great Heywood Marina, and Hoo Mill Lock and then mooring up just past Bridge 77 – our destination for this first leg of our great adventure.

We walked over the railway footbridge towards Hixon – and found our destination – Nick Thorpe Boat Building – We had promised Nick and Wendy when we saw them at Crick that we would bring the boat up for them to see!

There was plenty to see in the workshop – both a wide beam and a narrowboat, both sailaways, just about finished. Nick is then expecting the steel for his next build – another boat for MGM! 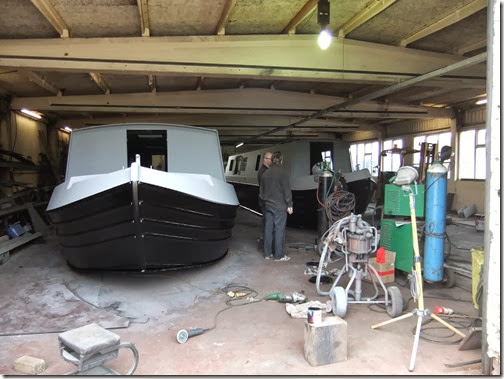 Nick and Wendy came over to the boat and had a look around and stayed for a natter – by then it was 6pm so we decided to stay put for the night.

On Friday there was a change of direction. Since we had reached our destination, we had to turn around, so just after bridge 78 we found the winding hole (turning point) and made our first turn!

First you put the nose of the boat into the winding hole and then pivot on this point bring the back end right round – easy – not!!! 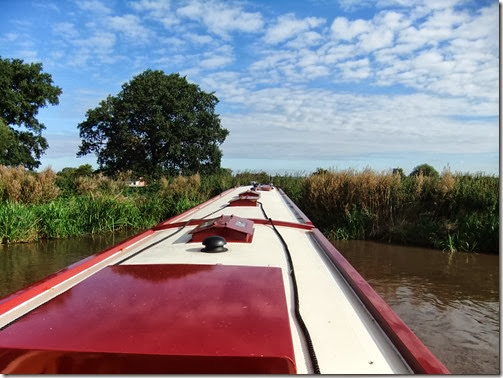 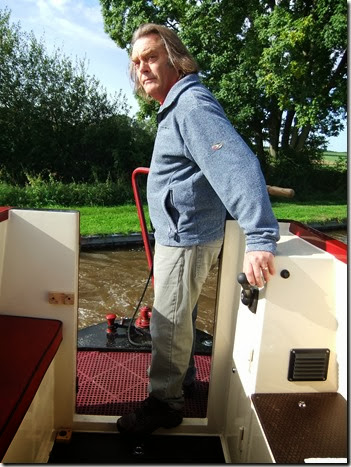 So having travelled 39 miles from Shardlow, we now started to head back!

We decided to pop into Great Heywood Marina for a (toilet tank) pump out, so had to negotiate the tight entrance! 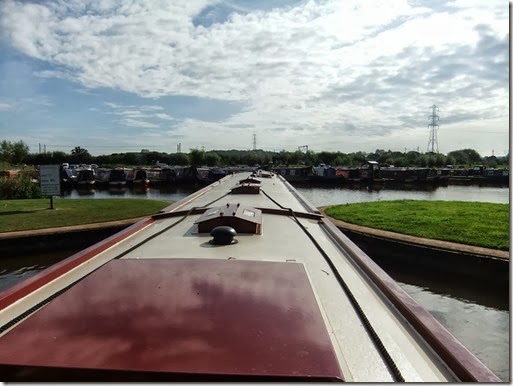 Phew! We did fit – but then once we were done, we had to get out again too!!

With an empty loo tank, we just needed one more thing – a full water tank – so again we stopped to fill up with water at Great Heywood Junction, and then slipped down the lock and found a mooring just a bit futher down, overlooking Shugborough Hall where we could stay for the weekend!

Lots of boats arrived during the afternoon and by Saturday morning there wasnt a mooring spot to be had! 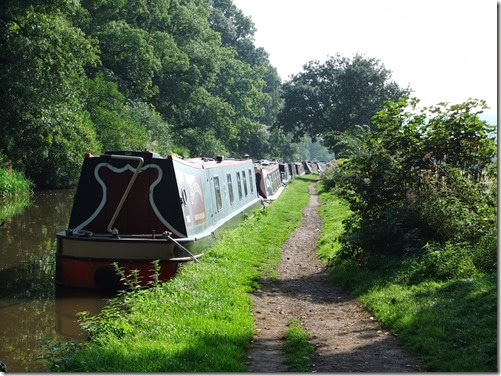 We picked a nice spot in the sun, so that I could hang some washing out – but after a while discovered we were on a bit of a tilt, so had to let the boat move away from the edge a bit to stay level! 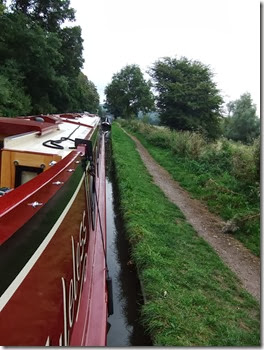 We had a walk up to the Canalside Farm Shop, but didnt buy anything and whilst we were out managed to get to the other side of the canal to get a good picture of our mooring. 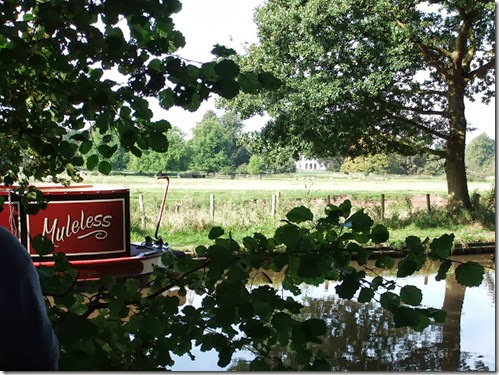 Gary had to hold the bushes out of the way for me to take the picture!

The weather was fantastic again – Sunday was sunny and hot all day!

Monday we moved off again, the batteries needed a good charge up, so after another quick shopping stop in Rugeley, this time trying out the new Tesco, and stopping for lunch whilst we filled the water tank, we thought we would do a full day cruising and go all the way to Fradley Junction.

We had hoped to be able to moor above Shadehouse Lock, but unfortunately the moorings were full. We moved on to the Junction and turned onto the Coventry Canal, hoping to stop there – but again the moorings were full – apart from the odd half a boat gap being left between boats. We tried to pull in on the end, but the bank had collapsed into the canal and we couldnt get close enough to moor – so with dark falling we had no choice but to move on.

Luckily we found space on some armco  below bridge 90 and pulled in as the light was fading in front of “Comfortably Numb”.

Tuesday we were on a mission to get to Fazeley Junction, so that Mark from MGM could come to do our first engine service.

The Coventry canal is not new territory for us, but we dont know it as well as the Trent and Mersey, and we havent travelled it for a few years.

We passed Huddlesford Junction (where hopefully the Lichfield and Hatherton Canal will be restored one day). 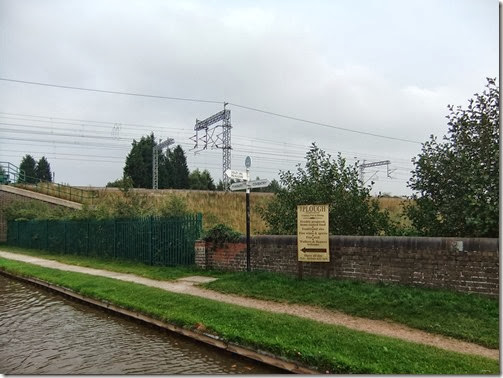 We passed some nice spots on the way through. 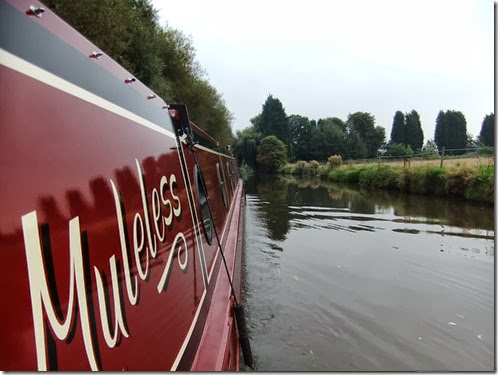 We reached Fazeley at about 2pm – just in time for lunch!

After lunch, we walked around to the CRT Office and water point, whilst checking where Mark could park his van to come and do the service. Here we are moored at Fazeley – where there arent many boats moored at the moment. 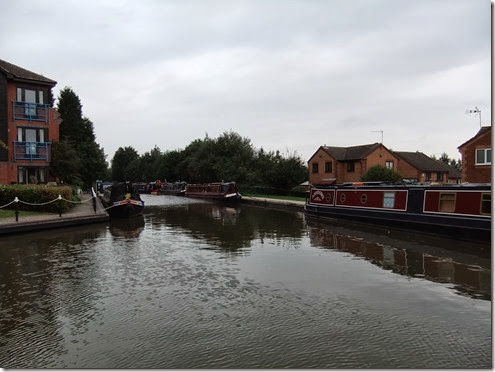